When ships sail through the ocean, barnacles, algae, mussels, and other organisms collect along hulls and stick to them, creating major headaches for the shipping industry and the environment.

Published on September 7, 2021 by Charles Digges

When ships sail through the ocean, barnacles, algae, mussels, and other organisms collect along hulls and stick to them, creating major headaches for the shipping industry and the environment.

That process is called biofouling, and it increases drag on ships, meaning that more energy is needed to power them. That, in turn, increases fuel costs and drives up their globe warming carbon emissions.

According to the International Maritime Organization (IMO) maritime transport is responsible for nearly 3% of global greenhouse gas emissions. If shipping were a country, it would be the sixth largest polluter in the world, the World Economic Forum says.

The buildup of marine life along ship hulls also means that some non-indigenous and invasive species can hitch rides from one environment to the next. That can cause irreversible damage as those species become dominant in their new environments and upend biodiversity. That’s no small matter. The IMO calls it “one of the greatest threats to the world’s freshwater, coastal and marine ecosystems.”

Runa A. Skarbø, Bellona’s senior adviser for shipping and maritime issues, is proposing a program to do something about this. It’s called the Clean Hull Initiative (CHI), and in cooperation with Jotun, a Norwegian hull coating producer, Bellona will work to develop an industry-wide standard for proactive hull cleaning.

“Fighting biofouling on ship’s hulls can – in addition to reducing negative environmental consequences – also save around 9 percent of the global fuel consumption and thereby also greenhouse gas emissions from shipping,” says Skarbø.

Last week, Skarbø was in Pontignano, Italy where she presented the initiative to the international HullPIC/PortPIC technology conference. 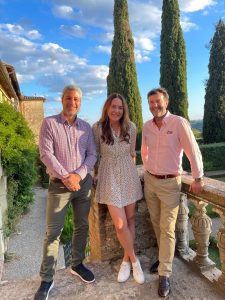 Manolis Levantis of Jotun, Rune Skarbø of Bellona and Stuart Brewer of Beacon Communications at the conference.

“Scientists estimate that about 60-70 % of aquatic invasive species are spread via biofouling,” she says. “This can lead to catastrophic impacts on local ecosystems and commercial infrastructure and activity.”

The technology conference where Skarbø presented CHI dealt with hull performance, in-water cleaning technologies and coating technologies. The annual conference gathers small and large actors in shipping in addition to coating manufacturers, technology providers and academia. The conference was thus a good venue for meeting relevant stakeholders and possible partners in the initiative.

“Regulations to prevent the spread of invasive species through ballast water have already been handled through international conventions,” says Skarbø.

“The fouling issue has not yet been properly handled. We believe there is a need for an international convention on biofouling management, and will work towards a requirement to perform satisfactory hull cleaning to minimise the spread of aquatic invasive species. In addition, greenhouse gas emissions from shipping will also be considerably reduced. Bringing industry actors into this work is crucial. Being able to participate in these forums gives us a great possibility to present our arguments and invite industry players to contribute. There was a lot of interest around the presentation and the initiative, and I am happy to see that the industry has a positive attitude towards the topic. I am looking forwards to working together with the industry and developing the standard,” says Skarbø.