The Intergovernmental Panel on Climate Change held a conference in Edmonton, Canada earlier this month to discuss recent findings and share insights on the topic of Cities and Climate Change. While cities currently host around half of the world’s population, this share is set to grow to around 64-69% by 2050[1]. This makes cities both a challenge and an opportunity in light of increasing climate impacts and carbon emissions. 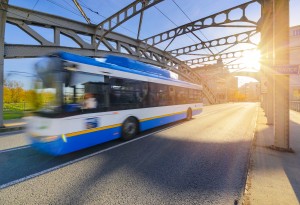 The new King of the road Credit: Thinkstock

The Intergovernmental Panel on Climate Change held a conference in Edmonton, Canada earlier this month to discuss recent findings and share insights on the topic of Cities and Climate Change. While cities currently host around half of the world’s population, this share is set to grow to around 64-69% by 2050. This makes cities both a challenge and an opportunity in light of increasing climate impacts and carbon emissions.

The potential for reducing carbon emissions is therefore heavily dependent on the role of cities, with wide agreement that deep decarbonisation would not be possible without them. A popular theme amongst experts at the IPCC conference was the need to re-evaluate the role of roads from one dominated by cars to one shared amongst mass transit, cyclists and pedestrians. This will need to be coupled with the radical transformation of the way cities are designed. The resulting co-benefits of these changes alone should be enough to justify the reduction of carbon emissions in cities, with pollution affecting the health and wellbeing of city dwellers, while also tackling the broader issue of climate change.

Ending the dominance of the passenger car

This idea is in line with the EU’s ‘Year of Multimodality’ which seeks to raise the prospect of using multiple means of transport for the same journey. There are increasing calls to lower the role of cars in city transportation. Barcelona, for example, pioneered pedestrian zones in which private cars are banned, in order to reduce high pollution and encourage locals to walk, cycle or take public transport.  In those so-called Superilles or Superblocks the neighbourhoods have seen wider pavements, more amenities for the community, and increases in walking and cycling.

Several EU cities have moved to tackle pollution by banning diesel cars and imposing ‘Low Emission Zones’. Last month, two cities (Stuttgart and Düsseldorf) in Germany successfully defended their right to ban diesel cars to minimise air pollution. Indeed, more than 130 cities in 23 countries in the EU have pollution levels above the legal limit. While the move to ban diesel cars is met with resistance from the industry and car owners, it is a clear indicator that major changes need to happen quickly to deal with an issue which claims more lives than any other environmental cause in the EU, with over 400’000 premature deaths per year.

Meanwhile, the European capital still lags behind its sister cities on the continent. A recent survey of business leaders expresses huge dissatisfaction – 87% thought transport had worsened – with transport in and around the city. In addition to this, a Greenpeace report claims that only 3% of schools in Belgium have ‘good’ air quality. To a large extent, this can be attributed to the country’s historically car-favouring city landscapes, extensive private car ownership privileges and ‘company car entitlement’ culture.

The current system makes it cheaper for companies to provide cars to their employees than it is to give them a wage increase, which means that around half of all cars in Brussels are paid for by employers. Of course, this provides little incentive for workers to use other forms of transport and serves primarily to increase local pollution, traffic and carbon emissions.

Given that company cars today account for roughly 50% of all new car sales in the EU and keeping in mind the fact that they often have an after-life as private cars, employers’ choice regarding the type of car provided will inevitably have a significant impact of the overall car fleet composition.

The Belgian government is in talks to develop emergency plans for when air quality is particularly bad, including measures to make public transport free and banning non-electric, non-emergency vehicles. Meanwhile, current plans to reduce pollution on a day-to-day basis are merely ‘reactive’ and short sighted. The Low Emission Zone, which came into force at the New Year, only bans Euro-1 diesel vehicles and those manufactured before the existence of Euro-standards. It is important to note that the Euro-1 standard was implemented in 1997; very little of those vehicles remain in circulation.

Furthermore, a recent T&E report claims that 90% of Euro-6 (the most recent Euro-standard) diesel cars do not meet emission limits. This puts into question whether a LEZ which relies on emission standards can possibly be reliable without strong and independent enforcement of these standards. While cities are seemingly doing their part to improve air quality and reduce transport emissions, the EU is failing to implement stringent and effective policies to support them.

The Superblock and diesel ban approaches demonstrate the willingness to encourage behavioural change beyond the traditional use of market forces, which are often lacklustre and easily manipulated, as exemplified by the emissions testing scandal. The EU is currently in the process of revising fuel economy standards for new Light Duty Vehicles and working on proposal to curb CO2 emissions from Heavy Duty Vehicles – a sector which has until today enjoyed exemption from such regulations in the EU, but we are yet to see whether these will provide sufficient ambition and strength.

The successful cases of European cities turning away from cars appears to show that framing electro-mobility as a solution to health issues has allowed cities to endure less resistance to radical policies. While the IPCC conference’s primary purpose was to remind us of the central role cities will have to play in the fight against climate change, it also reminds us that urgent and meaningful transformations must occur. Several cities and regions are demonstrating the political will to meet these targets but efforts at the national and EU level still remain much below the expected level of ambition.