To get themselves out of a dirty diesel scandal, some manufacturers plan to turn electricity into dirty diesel and other fossil fuels.

Published on August 2, 2017 by Bellona Europa 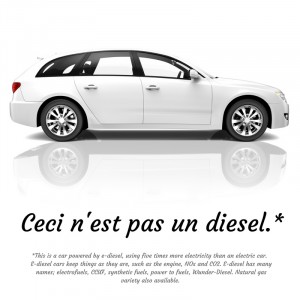 Almost two years after the first mention of Dieselgate, the trials and tribulations of Europe’s carmakers are far from over. The recent confirmations of a German auto industry cartel practices by Spiegel only adds to their pile of dirty laundry. With the auto industries’ avoidance of adequate air pollution controls in diesel engines, held primarily responsible for 130 EU cities breaking air quality laws, the road for diesel should to be rapidly running out. In the two years since Dieselgate we have seen Munich, Stuttgart, Paris, Madrid, Athens and many other cities banning diesels, consumers weary of buying diesel cars and a growing popular recognition of the damaging effects of the fuel. Diesel’s days are inevitably numbered.

But Diesel has been good for German car manufacturers, who are the most profitable in the world. A mixture of high profit margins from existing technology and a neglected base from which to build an electric auto future has resulted in parts of the German auto industry being desperate to keep combustion engines afloat with any means possible.

To get themselves out of a dirty diesel scandal, some manufacturers plan to turn electricity into dirty diesel and other fossil fuels. And yes, you read that correctly; and before you ask, no it’s not a good idea, and no it doesn’t work. Astonishingly, laws to encourage their use preferential to electric mobility are rolling through the European apparatus right now. We will all have to pay the bill, with the German car industry eventually paying the highest cost of irrelevance.

To continue sales of high profit margin, low innovation engines, carmakers are eager to make fossil fuels more palatable. The touted option is synthetic fuels, made with enormous inputs of electricity and a dash of CO2 captured from industries. The fuel will stay fossil, it will have all the qualities you have come to expect from fossil fuels, such as NOx and CO2, but it will be named renewable.

In a hope to give the internal combustion engine a longer shelf life, the carmakers expressed their strong support for this shiny new ‘Wunder-Diesel’. But with immense electricity resource intensity, synthetic fuels use almost five times more electricity than an electric car to travel the same distance. Along with negligible real world climate benefits, the fuels will soon prove to be a costly distraction from the actual solutions in transport.

‘’The costs of such fuels are still high, but a “second spring” for combustion engine vehicles is certainly possible.’’ (Association of the Automotive Industry, 2017)

And there you have it – an excuse to waste time and money on a solution that will not work to prolong the life of a fossil addiction of Europe’s greenest member country.

Audi supported Nordic Blue Crude, a synthetic fuel company that plans to use fossil CO2 from a fertiliser factory, reusing CO2 twice means the climate benefit is, at best, 50% in comparison to fossil fuels. In reality, it will be much lower. This is much less climate abatement than the much-maligned biofuels must achieve under EU law. Expect to see some creative accounting on the climate benefit of synthetic fuels, either not counting the CO2 going into the process or the CO2 coming out of a cars exhaust. Using only CO2 captured from the air would make synthetic fuels more climate friendly (not more NOx friendly), but would drastically increase the already huge electricity requirements. 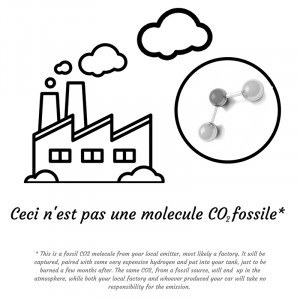 Synthetic fuels wont and can’t work at scale due to massive electricity requirement. They continue air pollution and have very questionable climate benefits. Replacing current German diesel consumption would require more than half of the country’s electricity; electricity that is used in industry, homes and would go much further and cleaner in electric cars. Along with their absurd emissions’ performance, these fuels are far from being profitable. On the contrary, they would need large subsidies to keep them afloat; German and European citizens would end up paying for a waste of their renewables, more fossil cars on their roads and a halt in electromobility development.

A short-term distraction at the cost of an industries future

The host of today’s diesel summit, the German minister of transport, Alexander Dobrindt, took it to himself to defend diesels and criticise its rival, electromobility:

‘’We still have technological decisions ahead of us; /…/ it is still possible that carbon-neutral synthetic fuels could be as good as battery technology.”

Dobrindt also emphasised the need for the auto industry to rebuild trust amongst its customers; while synthetic fossil fuels fit into that rebranding story, electric cars certainly don’t make the cut.  He particularly disapproved of the green party leader, Dr. Anton Hofreiter, whom he labelled a ‘rhetorical neanderthal’ for supporting electromobility. This neatly ties into the industry’s rebranding plan, as some carmakers plan to shut down their plug-in hybrids production as soon as synthetic fuels make it to market. With no one there to call their plan of taking renewable electricity and making it fossil neanderthal, Dieselgate 2.0. might just work.

The German transport minsters assertion that burning electricity inefficiently as polluting fuels in personal cars may be an effective alternative to battery electric is simply hogwash. The position only delays the urgent debate on how Europe can retain market share in the advancing electro mobility world. Electric cars are much more than city runabouts and are today direct and effective competitors to the high margin, high export luxury cars that Germany excels at.

Germany needs to step off the brakes and aid Europe in making real strides – not just press releases – on access to home and public charging infrastructure. Above all, it needs real efforts on incentivising a buoyant home market for electric cars, so Europe can advance technology and local battery production to retain export leadership in the automotive market of tomorrow.

PS: The emerging competition is not standing still. The Chinese government has announced plans for a new law that will require car makers to meet electric vehicle (EV) sales quotas of 8% by 2018, 10% by 2019 and 12% by 2020. India recently announced plan to only sell zero emission, electric vehicles, as of 2030.

PPS: In Oslo Norway, 35% of all new car sales are electric, with most of those French made Renaults.