Norway given EU’s strictest emission target – what does it mean?

“Above all, this will require huge emission cuts in the transport sector” says Bellona President Frederic Hauge, adding that Norwegian Prime Minister “Erna Solberg better roll up her sleeves”. 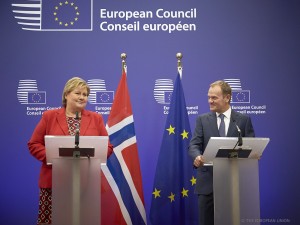 The European Commission has presented its proposal for the Effort Sharing Decision (ESD) that sets out emissions cuts in the sectors not encompassed by the EU Emission Trading System (ETS), namely transport, agriculture, buildings and waste. Bellona also welcomes the EU’s Strategy for Low-Emission Mobility, which was released the same day and includes promising proposal for decarbonising freight and electrifying transport (though falls short on biofuels, shipping and aviation).

The EU as a whole must reach a 30% emission reduction by 2030 based on 2005 levels. These emission cuts are divided between countries based on their wealth. Norway indicated to the Commission last year that it would like to join the EU’s climate efforts and has now been given the strictest requirement: 40% emission reduction.

“This is as expected. Effort distribution is done by countries’ economies, so it’s only right that Norway gets the strictest requirement” says Bellona President Frederic Hauge.

This is what Norway must do

Last year the Norwegian Environment Agency (Miljødirektoratet) published a report showing how Norway could reach various climate targets. To achieve a 40% target, all listed measures must be implemented, including:

Though Bellona welcomes Norway’s inclusion in the ESD, Bellona disagrees with the Norwegian Climate Minister Vidar Helgesen’s assertion that this is a historic bilateral development.

“To call this historical is to pull it way out of proportion. This is the way it should be, in accordance with the EEA Agreement. This is not a bilateral agreement, as the Norwegian government tries to brag, it’s just part of the EEA Agreement” says Hauge.

The really big difference compared to earlier climate goals, is that the EU is going to keep an eye on Norway. All countries that fail to meet their targets will get 8% higher requirements the following year.

“The greatest development is that now Norway will not dally along late after the EU countries like last time for the 2020 targets. This time there will be consequences if Norway fails” says Hauge.

The Norwegian government is unlikely to meet its own 2020 targets (set out in Klimaforliket). This will have no other consequences than the responsible politicians staring at their shoes. This however, will not be enough for the EU. 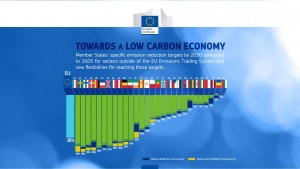 The European Commission has based its distributions on analysis before Brexit and before the Paris Agreement. Therefore it is expected that there will be a readjustment, where especially middle economies such as Spain and Italy could be required to increase their contribution. This also opens the door for Norway to have to make a greater contribution.

The Commission proposal will now be debated by the European Parliament. One of the major discussion points will be the option to buy credits.

“This option to water-down efforts will face strong opposition in Parliament and Bellona’s Brussels office will do its part to ensure requirements are as strict as possible” says Hauge.