Russian human rights activists say the Ministry of Internal Affairs, the country’s law enforcement body, is conducting a massive check in St. Petersburg on non-profits that receive funding from abroad in an apparent push to net more “foreign agents.”

Published on January 16, 2017 by Charles Digges 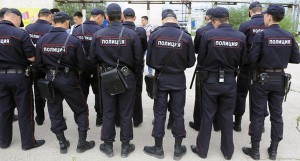 Russian human rights activists say the Ministry of Internal Affairs, the country’s law enforcement body, is conducting a massive check in St. Petersburg on non-profits that receive funding from abroad in an apparent push to net more “foreign agents.”

The St. Petersburg group Citizens’ Watch, with which Bellona has closely worked in the past, last week warned of the sweeps on its Facebook page, and said the police’s economic crimes division was targeting 158 organizations in the city of St. Petersburg and the Leningrad Region that had received funding from abroad last year.

The original NGO law of 2012 stipulates that non-profits operating in whole or in part on foreign funding register themselves as “foreign agents” with the Ministry of Justice if they engage in “political activity.” The Ministry in 2014 was given broad powers to name foreign agents on its own.

The new demand from police departments to examine some $33.5 million in funding to area nonprofits would seem to step on the toes of the Justice Ministry, and is a new cause for confusion over the law.

Over the past four years, the law has reduced the number of NGOs operating in Russia by more than an third.

The new law already creates difficult circumstances for organizations that receive even a fraction of their funding from abroad. NGOs have to comply with stringent, frequent and often arbitrary audit requests from the Justice Ministry that can derail their work as groups must scramble to produce relevant documents.

The new sweep in St. Petersburg seems motivated by that spirit. Police have requested, and received, a broad swathe of financial documents from organizations to track their funding sources. They’ve further threatened to raid and search offices of organizations that didn’t comply.

The group approached Mikhail Fedotov, the head of the Presidential Council for Human Rights and Civil Society ­– who is an opponent of the NGO law and who has frequently campaigned to amend it – for a reason behind the new sweep.

Fedotov told the business daily Kommersant that only groups in St. Petersburg and the Leningrad Region were affected by the new document check.

Yelena Topoleva, a member of the Civic Chamber, Russia’s legislative oversight committee, said foreign financial funding for NGOs was not forbidden, and that the police checks were an abuse of authority.

Alexander Nikitin, chairman of Bellona’s Environmental Rights Center Bellona in St. Petersburg, said the group had sent financial documents to the economic crimes division of the police a number of months ago but hadn’t heard anything further.

Citizen’s Watch chairwoman Yelena Shakhova detailed on Facebook that the group had received a written request from police for a wide array of documents on financing sources and on seminars and other activities the group had conducted over the past two years.

Shakhova said she refused to respond to the request because police can only demand these documents from a nonprofit only if they are investigating a criminal or administrative offence. She added that the police request for information didn’t mention why it was being collected.

She added that Citizens’ Watch, and numerous other organizations she had been in contact with in St. Petersburg, routinely furnish financial documents to the Ministry of Justice, as required by the “foreign agent” law.

Fedotov has recently pushed for new amendments to the NGO law that would protect environmental organizations from being tarred as foreign agents, but it’s as yet unclear if the government will be receptive.