President Vladimir Putin, according to Russian media reports, is again considering amendments to his signature “foreign agents” law of 2012, which has for the last four years hobbled the work of NGOs that receive financing from abroad.

Published on January 10, 2017 by Charles Digges

President Vladimir Putin, according to Russian media reports, is again considering amendments to his signature “foreign agents” law of 2012, which has for the last four years hobbled the work of NGOs that receive financing from abroad.

Earlier this week, the Putin said he’ll convene deputies to examine the law’s “enforcement policy” – essentially an effort to determine who it targets and why.

He put Sergei Kiriyenko, his First Deputy Head of the Presidential Office, and his special environmental representative, Sergei Ivanov, in charge of working out possible amendments to the law by March 30.

This is giving environmental groups some hope that they might be spared the law’s more bloodletting policies.

This week, the Kremlin confirmed to the daily newspaper Kommersant that Putin has charged Kiriyeko and Ivanov with possibly mitigating the law’s impact on environmental organizations in a nod to Russia’s Year of Ecology in 2017.

The current effect of the law is broad and vague. Enacted at a time when Putin faced an enormous upwelling of disapproval and nationwide street protests he said were incited by former US Secretary of State and unsuccessful presidential candidate Hillary Clinton – the law was designed to root out foreign influence and cripple social welfare organizations for perceived “political activity.”

Selective definitions of what constitutes that activity are the cudgel Putin has used against rights groups and environmental organizations, which then struggle under threats of prosecution and fines to prove they are not political. 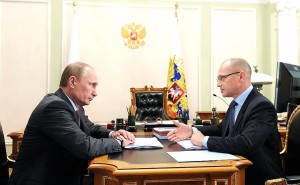 More than a third of the organizations get dissolved once they end up on the Justice Ministry’s foreign agent list. Bellona Murmansk was one of them.

Mikhail Fedotov, who heads the Presidential Council on Human Rights and Civil Society, is a long-time opponent of the law. He is currently urging Kiriyenko and Ivanov to clarify how the law actually defines foreign funding.

The hope is that this would loosen the stranglehold on environmental groups who receive grants from abroad for conservation and protection activities – activities that are routinely defined by the Justice Ministry as “political.”

Fedotov asserts that environmental organizations are constitutionally protected, but are nonetheless targeted for closure by overzealous regional prosecutors.

“The reason is simple,” he told the BBC’s Russian service in December. “It’s easier and cheaper to put environmental NGOs on the roster of foreign agents than it is to solve problems of environmental conservation.”

It’s unclear whether the new drive to protect environmental organizations will have the desired effect.

Alexander Nikitin, chairman of the Environmental Rights Center Bellona, is trying not to get his hopes up, but is still hoping for the best against bad odds.

Fedotov’s last drive to define technicalities of the law fell flat. At the beginning of 2016, he fought to narrow definition of what constitutes political activity under the law. The Duma, controlled by Putin’s United Russia party, instead voted to broaden the definition.

“They wanted better and it turned out like always,” said Nikitin of Fedotov’s last effort.

Anna Kireeva, who was formerly with Bellona Murmansk, but who now is an adviser with Bellona, said Fedotov’s last attempt to narrow the law backfired. She fears the same will happen again.

Fedotov has long campaigned against aspects of the foreign agent law in defense of environmental groups. In 2015, he called the law a “witch hunt” and blasted the Justice Ministry for targeting “necessary” organizations, specifically environmental ones.

Because of the law’s poor formulation, Fedotov said it was a ”weapon of mass destruction” against NGOs.