As Kremlin steels against changes to ‘foreign agent’ law, breaking it may be best

The Russian prosecutor’s office last week rejected legislative proposal from the Presidential Human Rights Council, saying it was an attempt to create loopholes to allow nonprofits from being characterized as “foreign agents” under the Kremlin’s harsh NGO law of 2012.

Published on January 30, 2017 by Charles Digges

The Russian prosecutor’s office last week rejected a legislative proposal from the Presidential Human Rights Council, saying it was an attempt to create loopholes to allow nonprofits from being characterized as “foreign agents” under the Kremlin’s harsh NGO law of 2012.

It was another recent ideas to curb the scope of the law that’s died a sad but expected death. Yet, more and more the foreign agent designation may be more complimentary than it seems.

While Alexander Nikitin, chairman of the Environmental Rights Center Bellona – which, two weeks ago, was declared a foreign agent ­– says the prosecutor’s rejection of the legislative adjustment was legal, it nonetheless points out persistent contradictions in the law showing it should be overturned. Andrei Zoloktov, former chairman of Bellona Murmansk, which in 2015 was closed for political activity under the law, agreed.

A third of Russia’s NGOs have been driven out of business for receiving even small amounts of foreign funding as a result.

Mikhail Fedotov, the head of the Human Rights Council, has led unsuccessful campaigns to challenge the semantics of the law. Last year, he helped craft amendments that would have narrowed legal interpretations of political activity. By the time they reached Russian Parliament, Duma deputies watered them down and made them more expansive and murky than they had been. 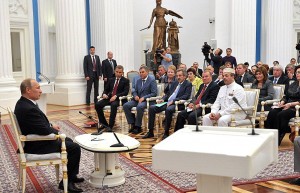 Most recently, Fedotov sought to exempt so-called social watchdog activities conducted by NGOs from being considered political activity. These watchdog activities include everything from election monitoring to legal advocacy, to local efforts by rights organizations to protect people from police corruption and violence.

Prosecutors, however, said excluding such watchdog approached from consideration in what constitutes political activity would allow foreign agents to slip prosecution.

Legally, said Nikitin, this is correct, and relies on a separate piece of Russian legislation that says watchdog activities meant to monitor the government and conducted by groups accepting foreign funding isn’t allowed.

“For that reason, the law will continue to run into these contradictions, which is why it should be cancelled altogether,” said Nikitin.

Zolotkov said one of the factors the Justice Ministry focused on when determining ERC Bellona to be a foreign agent was its zero emissions campaign last year.

The Justice Ministry said the campaign was designed to pressure government environmental official, and thus was both watchdogging and political activity. Never mind, said Zolotkov, that the Ministry of Natural Resources, Russia’s main environmental oversight agency, had launched a nearly identical campaign in 2013.

“To them, it’s not the substance or the contents of a campaign, but to whom it’s addressed,” said Zolotkov.

As Russia begins its year of the environment, Norilsk Nickel, one of the country’s biggest historic polluters, has announced it will spend as much as $14 billion over the next seven years to cut its pernicious heavy metal emissions by 75 percent.

It’s daughter company, the Kola Mining and Metallurgy Company, mere kilometers from the Norwegian border, pledged $460 million of that toward mitigating pollution that has shrouded not only Northwest Russian but Northern Scandinavia as well.

Bellona Murmansk, before it, too, was declared a foreign agent, helped predicate these grand vows by co-authoring a report on exactly what pollution from Norilsk Nickel meant. And it was for that report Bellona Murmansk found itself on the foreign agent list.

One wonders if the best possibility for having suggestions and research taken seriously isn’t doing precisely the kind of work that gets you tarred as a watchdogging foreign agent.