Russia’s president and Prosecutor General have offered a stick and carrot approach to dealing with NGOs that the government views as pesky at a recent gathering of the nation’s prosecutors. 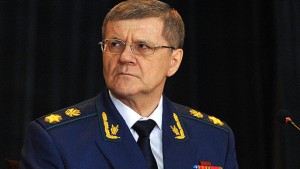 Russia’s president and Prosecutor General have offered a stick and carrot approach to dealing with NGOs that the government views as pesky at a recent gathering of the nation’s prosecutors.

Top Prosecutor Yury Chaika called on his colleagues at a March 23 gathering “to take exhaustive response measures” against NGOs that are “violating laws,” and said this should go as far as seeking “their dissolution via court proceedings,” in remarks carried by the TASS official newswire.

This appears to reinforce a policy recently adopted by the Ministry of Justice that targets so-called “foreign agent” NGOs and sues them out of existence.

Chaika said that a major prosecutorial sweep of NGOs in 2013 and 2014 “revealed numerous violations of the law due to lack of control and unwillingness [of NGOs] to work transparently,” adding that, “these violations should now be at the center of your attention.”

That was the stick.

But speaking earlier at the at the same gathering, President Vladimir Putin dangled the juicy possibility of granting special benefits to NGOs that are “irreproachable partners of the state,” according to remarks carried by RIA Novosti.

He added that a bill underpinning this would be initiated in the Russian Parliament.

What still remains unclear is how these two groups would be divided.

The 2012 law on NGOs says that non-profits receiving foreign funding and engaging in “political activity” must declare themselves as foreign agents with the Justice Ministry.

In 2014 the Justice Ministry was granted powers to force NGOs onto the list of foreign agents at its own discretion.

The effect has been that about a third of Russia’s NGOs have had to shutter their doors for good.

The sticky point for everyone has been exactly what the law’s definition of “political activity” actually is.

The Justice Ministry in January published proposed amendments that would define political activity that the NGO sector said made the term even more impossibly broad.

The Presidential Council on Human Rights and Civil Society loudly challenged the amendments, and they remain deadlocked in the floor of parliament.

While the fate of the amendments remains unclear, legal experts and NGO leaders are unimpressed with the palliative notion that there are benefits to being the government’s “irreproachable” allies.

Artyom Alexeyev, director of the Environmental Rights Center Bellona, and a lawyer, said Chaika’s punitive remarks were aimed at those NGOs that work with human rights and environmental issues.

“Correspondingly […] they apparently plan to reward obedient NGOs, the tame ones, who conscientiously fulfill government contracts for implementing social programs,” he said by email.

“It’s well known that many such organizations are ‘bought’ and are mostly aimed at receiving state funding, and not at providing any real help,” he wrote.

Andrei Zolotkov, former director of Bellona Murmansk, which made it to the foreign agent list and subsequently disbanded as an NGO in 2015, agreed.

“So, they’ve gone and divided NGOs into good and bad, that is foreign agents, and will further pontificate about how possible offenders will be punished and chastised,” Zolotkov said by email.

“All of these announcements from high podiums don’t contribute anything good to the public mood,” he added.