MURMANSK – A public hearing last week in the militarily Murmansk Region closed nuclear city of Snezhnogorsk summed up the chemical and radiological impacts associated with offloading spent nuclear fuel from one of Northwest Russia’s most notorious radiological hazards – the Lepse nuclear service ship.

Published on October 27, 2015 by Charles Digges 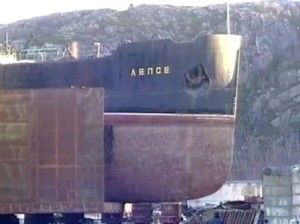 MURMANSK – A public hearing last week in the militarily Murmansk Region closed nuclear city of Snezhnogorsk summed up the chemical and radiological impacts associated with offloading spent nuclear fuel from one of Northwest Russia’s most notorious radiological hazards – the Lepse nuclear service ship.

But because local authorities wouldn’t allow Bellona Murmansk to attend the hearings, it’s an open question as to how public the discussions actually were. It’s also questionable as to how accurate they could have been without Bellona Murmansk’s participation.

Since 1994, Bellona Murmansk has been the foremost authority in Russia on the Lepse and its radioactive cargo. The organization was the first to arrange public hearings on the fate of the vessel, and spearheaded years of technical discussions on how to safely dismantle the ship, which was one of Northwest Russia’s most dangerous nuclear legacies.

The Lespe, offloaded and reloaded nuclear fuel for Russia’s icebreaker fleet at sea between 1961 and 1988. It was finally decommissioned that year, but spent 24 years at dockside at the Atomflot icebreaker port in densely populated Murmansk burdened with its lethal load awaiting dismantlement. 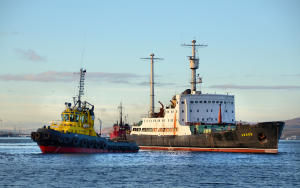 The Lepse being towed out of Murmansk’s Atomflot port, where it languished for 20 years, to Nerpa in September 2012. (Photo: Bellona) Credit: Bellona

Through the efforts of Bellona Murmansk, Bellona’s Oslo offices and numerous international funders, the ship was finally moved in 2012 to the Nerpa shipyard.

Upon arrival, the vessel was again docked for two years while drydock space was negotiated for its dismantlement.

It was finally taken off the water in 2014. Removal of its 639 spent fuel rods, many of them damaged, is now taking place as engineers cut the boat into sections.

So why keep Bellona Murmansk out of last week’s hearings?

In March, Bellona Murmansk was listed as a “foreign agent” by the Russian Justice Ministry under Russia’s harsh 2012 NGO law. On October 12, it was forced to disband as a Russian NGO. The group is now rearranging its structure under a new bureaucratic aegis that will allow it to continue its work.

Last week’s hearing drew some 70 residents of the closed city, meaning out-of-towners would have had to apply to enter the city months in advance.

“We understand that all documents for the project have long passed government environmental impact studies, and received positive conclusions, but the law [on environmental impact studies] doesn’t carry a prohibitive character,” Sergei Zhavoronkin, secretary for the Public Council on the Safe Use of Atomic energy for the Murmansk Region, told Bellona.

“Therefore, we tried to observe al procedures as they are described in the law on public hearings,” said Zhavorokin who was present in the closed city for the talks, and whose council organized them.

According to the announcement for the hearings published in the regional newspaper Murmansk Vestnik, public hearings on the official environmental impact study were conducted in accordance with Russia’s federal law demanding such hearings be widely accessible. 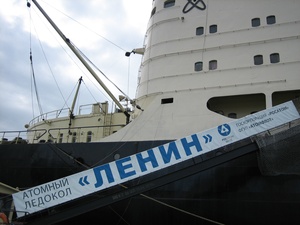 Materials from the impact study were furnished for public viewing in both in Snezhnogorsk, and in Murmansk aboard the decommissioned nuclear icebreaker Lenin, which has become a public museum since its decommissioning.

Workers on the Lenin told Bellona there was little activity to suggest anyone had come to view the materials from the Lepse environmental impact study. The daily log of visitors aboard the vessel showed only two people had viewed them within two days of the public hearing – and both of them were employees of Bellona Murmansk.

Zhavoronkin did say that those present at the hearings were representatives of Aspect-Conversion, which facilitates international nuclear and radiation safety; Afrikantov Experimental Design Bureau for Mechanical Engineering, a subsidiary of Russian state nuclear corporation Rosatom; the Atomflot nuclear icebreaker port; the State Target Program for Nuclear and Radiation Safety, as well as representatives of the Nerpa shipyard.

He told Bellona that representatives gave their appraisal of the documents and technical plans for unloading the Lepse’s spent nuclear fuel, and possible impacts on the environment the project might have, though further elaboration was not available.

As far back as 2007, it was required by law that the environmental impact study of the Lepse dismantlement project be the subject of pubic hearings.

Bellona Murmansk was the organizer of that first hearing. The hearing was held at the Nerpa shipyard.

In order that all who desired could attend the hearings, as well as view the facilities that would eventually dismantle the Lepse, Bellona Murmansk arranged free transport to the closed nuclear shipyard.

At last week’s hearing, however, no one was able to visit the shipyard for a fuller assessment. There was also a recommendation made by local authorities to decline inviting Bellona Murmansk representatives to the closed city where the public hearings took place

And this, according to Zhavoronkin, despite the showing of a 20-minute documentary on the Lepse, filmed by Bellona Murmansk in 2004, as one of the central elements of the hearing.

At present, construction of a special radiation shielding box around the vessel’s sections is underway. The plan for disposing of the Lepse envisions cutting the ship into 5 sections moving toward the bow, the second and fourth sections of which contain the bulk of the vessel’s long-stored spent nuclear fuel.

From left to right, the Lepse's bow, the fourth most radioactive section, the midsection, the second section, which will be stored at Sayda Bay, and the stern. (Source: Nerpa)

Officials say the Lepse’s holds are loaded with 639 spent nuclear fuel assemblies, many of which are damaged and will require as-yet-to-be-developed technologies to safely remove.

The Lepse’s second section will be treated and sent to Sayda Bay, where construction of a conditioning facility for solid radioactive waste has been underway.

The forth section of the vessel, however, will require immense effort and construction of a shelter at Nerpa against radiation. This shelter will serve as operational headquarters for unloading all spent nuclear fuel stored aboard the Lepse, said Zhavoronkin.

Meanwhile, the European Bank of Reconstruction and Development (EBRD) – which has managed much of the investment in the Lepse through its Northern Dimensions Environmental Partnership (NDEP) met in London on October 13 and 14.

One of the questions central to the EBRD meeting was the progress on the Lepse’s drydock dismantlement. According to data from the Russian side, the project is progressing on schedule.

The EBRD meeting concluded that it will be safe to begin removing the spent nuclear fuel from the remaining sections of the Lepse during the fourth quarter of 2017. The entire project is expected to be complete by 2018.