ST. PETERSBURG – Another Russian environmental group, the Siberian Environmental Center, has found itself on the Russian Justice Ministry’s expanding list of “foreign agents” for its support of 30 Greenpeace activists who were arrested – and later amnestied – by President Vladimir Putin – a year and a half ago.

Published on February 16, 2015 by Liya Vandysheva 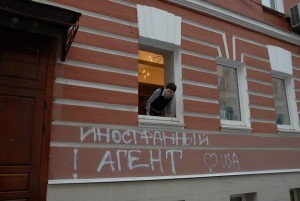 The building of Memorial, Russia's oldest rights group, was defaced wiht graffiti reading 'foreign agent' in November 2012 when the initial NGO law came into effect. Memorial, too, is on the Justice Ministry's foreign agent list. (Bellona)

ST. PETERSBURG – Another Russian environmental group, the Siberian Environmental Center, has found itself on the Russian Justice Ministry’s expanding list of “foreign agents” for its support of 30 Greenpeace activists who were arrested – and later amnestied – by President Vladimir Putin a year and a half ago.

The Justice Ministry also said the Novosibirsk-based group had run afoul of the controversial NGO law for criticizing certain changes in Russia’s tax code that allow oil companies to be compensated directly by the federal budget.

Russia’s harsh law on NGOs, which took effect in November 2012, stipulates that non-profits receiving any foreign funding and that are engaged in vaguely defined political activity must register themselves with the Justice Ministry as “foreign agents” – a term equated with espionage. In June, Putin gave the Ministry the authority to designate foreign agents on its own. The price of solidarity

The Justice Ministry added the Siberian Environmental Center to its public Russian-language list of foreign agents on February 12, making it the second major environmental organization to be so designated.

The first was the anti-nuclear group Ecodefense, which receives part of its funding from the European Union. It’s co-chair Vladimir Slivyak told Bellona in July that the group was named a foreign agent because it protested the construction of the Kaliningrad Nuclear Power Plant, tantamount in the Justice Ministry’s eyes to protesting the state itself, making it guilty of political activity. Ecodefense is fighting the foreign agent label in court.

The Siberian Environmental Center fell afoul of authorities in  January during an inspection of its office by Justice Ministry representatives. The raid turned up information on the group’s website supporting the so-called Arctic 30, a boatload of multinational Greenpeace activists who in September of 2013 tried to hang anti-oil drilling banners on state corporation Gazprom’s prized Prirazlomnoye oil platform in the Arctic’s Pechora Sea.

The 30 aboard the vessel were charged with piracy and jailed pending trial. In December 2013, they were released under a general amnesty proposed by Putin.

During the July inspection of the Siberian Environmental Center, officials also accused the group of “criticizing a decision of the State Duma” because it suggested on its website that oil companies not be compensated with taxpayers’ money.

In an appeal sent to the Presidential Human Rights Council, and seen by Bellona, the group said the conclusions drawn from the July raid were “false interpretations of law and a distortion of facts, the result of which the Siberian Environmental Center was falsely accused of administrative violations.”

The group further said that: “In publishing a call for support for Greenpeace, the Siberian Environmental Center was availing itself its rights […] of the federal law ‘on public associations’ and it operating completely within its statutory goals and objectives.”

In an email to Bellona, group member Ilya Smelyansky wrote that, “we, of course, don’t engage in political activity, and have not for a long time even engaged in defending citizens’ environmental rights – but in the perverted understanding employed by the Justice Ministry, it’s not hard to use these words to describe almost anything.|

A future of Gongos and Bongos?

Smelyansky told Bellona that he’s worried that if the situation for NGOs in Russia doesn’t change, “there won’t be any independent non-profits, only those financed by the government or business on orders from the government.”

The Siberian Environmental Center has for many years been involved in research and preservation of unique forest and steppe ecosystems, endangered species protection and environmental education.

Its inclusion on the Justice Ministry’s foreign agent list will complicate its work, but not paralyze it, Smelyansky wrote in his email interview with Bellona.

“Naturally, we are not planning to halt our work and will simply reorganize as a new legal entity, taking into account our past mistakes” which put us in jeopardy under the NGO law, he said. Such an arrangement is becoming a popular practice among NGOs that have been attacked by the broad law.

“But in general, the pressure is directed toward the de-institutionalization of the nonprofit sector as a whole,” Smelyansky told Bellona. “This certainly isn’t making any of us happy.”

This article was translated and edited by Charles Digges.