The Environmental Rights Center (ERC) Bellona is experiencing a record-breaking year in applications to its EcoJurist program, its five-year running competition to support Russia’s environmental lawyers.

Published on October 31, 2014 by Bellona Europa 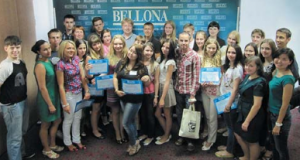 The Environmental Rights Center (ERC) Bellona is experiencing a record-breaking year in applications to its EcoJurist program, its five-year running competition to support Russia’s environmental lawyers.

The program has since its inception supported the work of 6000 environmental law students working with Bellona’s lawyers and environmental experts to learn the ropes of untangling the circumstances of Russia’s thorny ecological legislation. Prizes are awarded both to universities and especially distinguished individual applicants.

“We are seeing an huge boost in the program’s popularity and prestige,” said Nikolai Rybakov, ERC’s director in an interview Thursday. “The Ecojurist program is now something of a household name in law faculties across the country, not only in the big cities but in universities from Russia’s regions as well.”

This year’s number of applicant universities wishing to take part in the program is expected to top 3,000 by the deadline of November 15, said” Rybakov, with some 2,000 applications already received and ready to be reviewed by an independent jury consisting of leading Russian experts in environmental law, government representatives and prominent public figures in the environmental movement.

Yet, this means Bellona is handling more applications than it has universities that have won the contest over the entire five years of the program’s existence, and Rybakov said the breadth of stellar applications is going to pose a challenge.

“It’s encouraging to see the sparks of such innovation – even if applicants are not successful, there is clearly a very sharp new generation here ready to take on the complicated issues at hand,” said Rybakov.

This year, ERC Bellona will announce 20 winners from among the staggering number of applicants on December 3, Russia’s national jurists’ day.

Russia has this year seen an unprecedented crackdown on the work of environmentalists.

Yevgeny Vitishko, who co-authored a whistleblowing report with the Environmental Watch on the North Caucasus (EWNC) group over the breathtaking ecological damage inflicted on Sochi region, and where President Vladimir Putin and his cronies held their $51 million Winter Olympic Games, was imprisoned for his outspoken protests.

The work of Vitishko and his EWNC colleagues revealed sweeping violations of and chaos within Russian environmental law, crony deals in the Kremlin to cut up public lands for the president and his patrons to build ascendant summer homes in national parks, and the ongoing poisoning of the Sochi region’s drinking water and protected wetlands by ongoing illegal construction dumping in Sochi National Park.

Vitishko has been declared a Prisoner of Conscience by Amnesty International, and the subject of fierce international outcry over his incarceration.

Two environmental organizations have likewise found themselves on the Justice Ministry’s list of “foreign agents” after the already draconian 2012 NGO law was amended in June. The previous iteration of the law dictated that any Russian NGO accepting funding from abroad and engaging in vaguely defined “political activity” brand itself a foreign agent.

On June 4, frustrated by the low turnout of self declared spies, President Vladimir Putin signed a decree allowing the Justice Ministry to name foreign agents on its own. The first environmental organization to be tarred as a foreign agent – and left to the financially breaking work of trying to clear its name in court, was Ecodefense.

The group was tarred with the Soviet moniker for its protest of the Baltic Nuclear Power Plant, which the Justice Ministry said was tantamount to protesting the state.

And that’s just for starters.

Even though Rybakov attributes the growth in applications to the growing familiarity with Bellona’s Ecojurist program among Russia’s universities, 2014 has shown there is clearly no shortage of work for a well-trained and worldly generation of ecological lawyers to make sense of the Gordian Knot Russian ecological legislation and human rights debacle has become.

Not only universities are eligible. A special few applicants will be singled out for scholarships that will include stipends to study abroad.

This year’s prizewinners will receive courses in English via Kaplan International and AcademConsult in the United Kingdom, the United States, Ireland or New Zealand, with all expenses paid.

The courses will include 27 to 35 lessons over a four-week period in preparation for the IELTS or TOEFL exams, hence preparing students to become more conversant with international environmental law and bring that knowledge home with them, where its application is direly needed.

The competition to land a spot in the program is arduous. The application process runs fro October 15 to November 15, at which point the applicant pool is winnowed down based on a competition consisting of theoretical and practical exam tasks.

The second, or qualifying round determines the winners, who will go on to participate in the program.

Winners are determined based largely on their personal essays. The essays must focus on at least violation of citizens’ environmental rights in the area were an applicant resides or studies that took place during the current year, or which has been ongoing for several years.

Another portion of the application concerns answers to questions an applicants personal experience attempting to citizen’s environmental rights, how these right are routinely violated, how such violations can be remedied, how authorities have reacted when such violations have been filed, and if authorities have not responded appropriately, what course of action applicants would chose.

University winners have includes Volgodarsky State University, the Juridical Institute of the Siberian Federal University and the Volgodarsky Academy of Government Service.