ST.PETERSBURG – Some 150 environmentalists from around Russia have gathered at a Bellona-hosted conference in the town of Pushkin to address the basic questions of where ecological activism in the country stands today, and how it should move forward in increasingly repressive conditions , increased Kremlin paranoia and a general sense of nationwide disconnect. 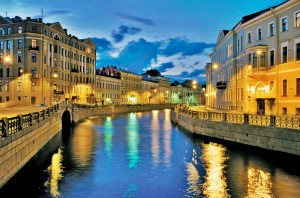 ST.PETERSBURG – Some 150 environmentalists from around Russia have gathered at a Bellona-hosted conference in the town of Pushkin to address the basic questions of where ecological activism in the country stands today, and how it should move forward in increasingly repressive conditions , increased Kremlin paranoia and a general sense of nationwide disconnect.

It’s a tall order of business to reach a consensus on the 72 hours of the conference, but it is also a necessary discussion to be having at a time when there is less unity of message across all stripes of activism in Russia, and at a not-unfamiliar retread of history when most of Russia’s critical voices are being harassed, jailed or hooted into silence or exile.

Nikolai Rybakov, director of the Environmental Rights Center (ERC) Bellona, said in his opening remarks that the conference will seek to fuse the work of environmentalists young and old, from the smallest student organizations to the work of Alexei Yablokov, the grandfather of Russian environmentalism.

Corruption, a new battle for the young Nikitin saw within the conference’s participants an infusion of new faces, which, he said, is “very important.” He said that the environmental movement in Russia is more frequently characterized by the gathering of the same familiar personalities.

“But the moment is coming when the ecological and environmental and human rights society in Russia demands new ideas, new views, new creative suggestions, especially from the young,” Nikitin told the conference. “Without the young, there is no future for those ideas, for those projects, that we with you are advancing and will be discussion here.”

The conference, which is heavily financed by a number of presidential grants, dealt its first blows against the pox of government corruption that has over the past years become one of the most corrosive hurdles to activism of all stripes, ERC Bellona Chairman Alexander Nikitin noted.

The conditions for activists are hostage to private and state interests and selective legal targeting and persecution of activists and ordinary people alike who wish to take a stand against the arbitrary whims of Moscow’s inner circle and its complex juggernaut of commercial and bureaucratic entanglements.

It has become so pervasive, said Nikitin, that even those who try to show the path away from it are themselves not believed.

“Corruption in eroding the country, corruption is eroding society, people have stopped believing the authorities, specifically legal authorities, and even you and me – the very public organizations that have a vested interest in these questions,” said Nikitin. “People have stopped believing one another – the fault for this lies specifically with corruption of the authorities on every level, deception, unaccountability and failure to carry out legislation.”

As an example of this pervasive corruption, Nikitin pointed to Russia’s practice of accepting spent nuclear fuel and radioactive waste from other countries, a practice the majority of the Russian population oppose in polls, but whose opinions are summarily dismissed by authorities.

He noted that Sweden engages in the same practice, but that environmentalists and the population alike are in agreement that their country can do it safely – precisely because the government takes into account their opinion, makes available to them complete information on such projects, and, as Nikitin put it, “the public’s right to get answers to inconvenient and critical questions.”

Taken together, he said, this approach engenders a culture of trust between Sweden’s people and the government that works to serve them.

Nikitin, then, posed a stark task to the conference’s attendees. In a society “where we have no belief in anyone,” he said, is there “any hope remaining that we can find fairness in the legal system and among law enforcement?”

Nikitin concluded his opening remarks, saying: “Our task is simple – we must defend those who insist on our environmental rights. We cannot just allow them to be dispatched with.”

Russia is in ill health “The environmental situation in Russia has completely escaped the control of the government and society,” he said. “Some 14 percent of Russia’s territory is basically unfit to live on, some 67 million people tolerate conditions of pollution exceeding [legal] more, 27 million of them in conditions that exceed pollution norms by five time, and 12 million where pollution exceeds 10 times the norm.”

According to figures from the World Health Organization citied by Yablokov, some 490,000 Russians have died from environmentally related illnesses since 2004. He likewise cities such as Moscow, Novosibirsk, and other large population and industrial centers in Russia where 5,000 to 10,000 deaths a year can be chalked up to environmental causes.

Yablokov attributed this loss of life to the government’s “anti-ecological” policies that have characterized Kremlin policy for the last 18 years.

These policies, he said, strive to gain quick profit by lowering standards of or neglecting altogether environmental legislation. Such an approach is possible, said Yablokov, because of a strict “power vertical” that takes no account of scientific evidence of environmental degradation, or of the public’s right to live in healthy environmental conditions.

He noted further that Russia’s repressive polices across the board, from press censorship to activist crackdowns, allow Moscow to keep the Russian population in the dark about just how bad things are.

Another of the conference’s opening day keynote speakers was Greenpeace Russia’s Ivan Blokov, who said that this very void of accurate information about the environment – from pollution levels to oil spills to forest fires and a host of other problems – must be filled if Russians are to have any hope of influencing government policy.

Blokov said that information about how oil spills occur and are dealt with is a benchmark in measuring the Russian government’s relationship to the environment. According to his data, relations are not good.

Each year, rivers flowing into the northern ice seas of the arctic carry some 500,000 tons of petroleum products from land spills into the arctic area. Even this, though is a drop in the bucket. According to his research, this 500,000 tons constitutes only 5 percent of what gets spilled during Russia’s yearly drilling activities. The main culprit in the spills are antiquated and derelict pipelines – causing an incredible 20,000 to 30,000 ruptures per year.

To prevent these and the groaning weight of Russia’s other environmental problems from choking the country, said Blokov, two things are needed: “First is active people, and the situation is not bad here, and second is information that the government tries so hard not to give us.”

Uniting environmentalists in a common cause

Yesterday’s  discussions closed on a presentation of a report entitled “Violations of Ecological Rights of Russian Citizens for 2012 to 2013” (currently available only in Russian), Bellona’s third report on violations of environmental rights.

The report was resented during a panel discussion detailing region by region environmental problems in the country, and a discussion of its compilation revealed the fact that, often, many different environmental groups, unwittingly independent of one another, are often trying to find solutions to the same problems.

According to Tatyana Kargina of The Green Movement of Russia EKA, this is a problem that often results when people react only to environmental devastation that is close to them, and don’t take into account the wider degradation occurring across the country.

Even then, she noted, the task is daunting.

“Its frightening to begin action alone – a person needs to find like minded compatriots,” she said. “To find them help, there has to be a degree of professionalism in social networks, or our own mass media aimed at penetrating the information blockade.

Changing the environmental movement from the inside so that broader nets are cast and more information shared between numerous organizations is a point Alexei Toporov, director of the Siberian Ecological Agency, and Dmitry Shevchenko of Environmental Watch on the North Caucasus made to the conference.

“We are one against a million – if we include our colleagues in the regions, then let’s say 100 against a million,” said Toporov. “Maybe, we can change the system? So that people – the majority rather than the minority as it is now – begin to defend their own rights?”

Watch the web simulcast of the ongoing discussions (in Russian)  here.

This article is based on material prepared by Anna Kireeva (anna@bellona.ru)