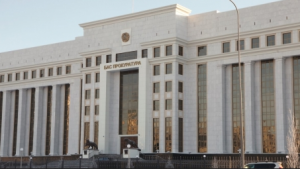 According to the Prosecutor General’s office, as of December 31, 2013, investigators identified 24 NGOs that fall under the wheels of the legislation, which stipulates that non-profits receiving money from abroad and engaged in vaguely defined “political activity” must declare themselves as foreign agents on pain of heavy fines or closure, Interfax said.

“These organizations took part in political activities by means of participating in election procedures, public events, by drafting legislation and other things,” Chaika said, according to Interfax – a salvo directed in part at the Golos vote-monitoring agency.

NGOs themselves have long protested the self-assignment of the “foreign agent” label, saying the label both diminishes their presiges by implying they are spies, and because the term is also pregnant with parallels to Stalin’s purges. Nearly no organizations have registered themselves as foreign agents.

Golos, which was the first organization shut down by the foreign agents law, was instrumental in exposing vote fraud in Russia’s December 2011 elections, where a hefty majority of United Russia, the Kremlin backed party of power took seats.

The revelations ignited months of overwhelmingly peaceful but ardent anti-government protests, and Golos’s revelations have been citied as the impetus for the NGO law, which took effect in November 2012.

Chaika also claimed that more than 200 other Russian NGOs had received more than 6 billion rubles ($168 million) in financial support from abroad.

“Indications of political activity and foreign funding from 2010 to 2013, confirmed by the NGOs’ documentation and exceeding 6 billion rubles, have been found in 215 non-profit organizations,” the report said.

This is a far lower figure than cited by President Vladimir Putin himself in an April 2013 interview with ARD German television, wherein he claimed 654 Russian NGOs had received over $1 billion in between November 2012 and April 2013 – something that, according to calculations by The Moscow Times at the time, would have meant each NGO in Russia had received some $382,000 in six months.

NGO directors across Russia hectored the notion they had received such lavish foreign support.

One organization that was publically targeted by Chaika in his report was the Public Verdict Foundation, which offered legal support to defendants in the Bolotnaya case, which was brought against participants the May 6, 2012 anti-Kremlin protests that were to take place on Moscow’s Bolotnaya Square on the eve of President Vladimir Putin’s inauguration to his third term in office. The Boltnaya Square incident was the only protest to turn violent in the nearly year-long wave of demonstrations that brought on to the streets tens of thousands of people opposed to Putin’s return to the presidency. The May 6 clashes broke out after police blocked access to the protest site to thousands of protesters, and resulted in the jailing of 18 demonstrators.

According to Interfax, the prosecutor’s report said Public Verdict had received US financial support to aid organizers in assuring demonstrations against Putin and the rigged 2011 Duma would take place. Public Verdict, according to the report, helped “shape public opinion about excessive actions of the government in curtailing violations” allegedly taking place during the protest.

Another major rights organization that will be liquidated, The Moscow Times reported, is ADC Memorial in St. Petersburg. The group has refused to register itself the Justice Ministry –which oversees enforcement of the NGO law – as a foreign agent. It’s disbandment was announced last week, the paper reported.

Dmitry Shevchenko, co-director of the Environmental Watch on the North Caucasus (EWNC) told Bellona by telephone last week that his organization has been completely steamrolled by the foreign agents law, as well as anti-extremism legislation.  The organization’s bank accounts have been frozen, though it continues its activities.

Shevchenko said the complete decimation of the organization is political reprisal for its unwavering stance in documenting environmental devastation and corruption surrounding Russia’s Sochi Winter Olympic Games, held in February.

Russia’s counter-terrorism and counter-extremism unit had urged the group not to publish its comprehensive report documenting the Olympic environmental devastation to avoid any “harm to the country.” The report was released in Moscow during the Olympics, the same day one of its most prominent contributors, Yevgeny Vitishko, was imprisoned for three years.

Suren Gazaryan, who co-authored the report, and who received this year’s prestigious Goldman Environmental Prize, ironically pointed out in a recent interview with Bellona that the EWNC has received four foreign grants in the past 10 years.

On the whole, only one organization has thus far registered itself as a foreign agent –Supporting Competition in CIS Countries. The relatively unknown organization says on it’s website that its purpose is facilitating observation of laws governing competitive business practices among countries of the Commonwealth of Independent States – the loose confederation of former Soviet republics.