In a heated attack on civil society movements during a televised meeting with Russian President Vladimir Putin, General Prosecutor Yury Chaika slammed 215 NGOS he says have run afoul of the law by receiving foreign funding and not registering as foreign agents. 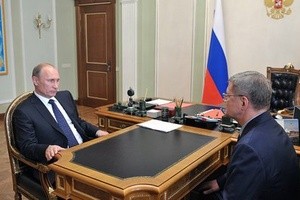 The Duma passed the controversial “foreign agent” amendments to Russia’s NGO law last July.  They entered force in November, requiring all NGO groups that receive foreign funding and engage in vaguely defined “political activities” to register with the Russian Justic Ministry as foreign agents, a term pregnant with Cold War connotations of spying.

Critics also complained that political activity is so sloppily defined that it could be against any NGO.  Indeed, even a Siberian bird sanctuary has been warned it is functioning as a foreign agent.

Chaika’s blustery verbiage was surprising as it followed by less that a week public remarks by Putin wherein – for the second time since late June – he sided with rights activists who want the law amended to make NGOs that do not engage into politics exempt from it.

Chaika went on further to say in his Tuesday meeting that some 2000 NGOs through Russia has received some 24 billion rubles ($1 billion) in funding from abroad, seemingly corroborating remarks made by Putin in March to a German Television station.

But Chaika, noted Alexander Nikitin, chairman of the Environment and Rights Center (ERC) Bellona, went on to clarify that this supposed bonanza of financing for NGOs was a combination of Russian and foreign funding sources – contradicting Putin’s precipitous assertion in Germany that all the money was coming from other countries.

This was something of an embarrassment for the president, who had in March insisted his $1 billion figure in foreign assistance was a matter of record with the Prosecutor General.

Dissention in the ranks

There are also strong undercurrents with the Kremlin that the foreign agent law is rife with imperfections that are now becoming all the more glaring, and which threaten to alienate many of Putin’s most indispensible allies, Nikitin said.

“The clumsy and weak law on foreign agents provoked an unambiguous […] among people who inhabit the corridors of power and occupy various important positions there,” said Nikitin. “Now, various ways to smooth out the most awkward norms in the law are being pursued – from this comes Putin’s constant announcements about the necessity of amendments.”

“There is no clear understanding of political activity, specified [in law], so as to avoid its different interpretation by different people,” she said as quoted by Itar-Tass news agency. She added that the Federation Councilis “ready to submit proposals to make corrections that would ensure [the law’s] proper and logical application.”

Russia’s human rights ombudsman, Vladimir Lukin told the Interfax news agency the law needs to be amended to clearly distinguish between organizations engaged in political activity and those working on social issues.

In the televised meeting, Chaika continued to rail against 17 NGOs he said his office had discovered were being financed directly by foreign embassies, and another 22 that had continued receiving foreign funding from aboard after the foreign agent law went into effect.

Summing up, Chaika said: “And 193 NGOs up to the moment the law took effect wholly corresponded to all criteria of foreign agent NGOs and received financing from abroad and carried out political functions,” though he added that the groups had since turned away foreign financing.

According to Nikitin, Chaika need not fall into lock step with Putin’s pronouncements, as he is, in effect, not a politician.

“[Chaika’s] work begins and ends with following the enforcement of the law,” said Nikitin. “He doesn’t have any obligations, much less moral ones, to ferret out shortcomings in laws and criticize them.”

During the meeting, Putin – who has focused the lion’s share of his third presidential term on rooting out opposition after facing massive street demonstrations protesting his further rule –publicly urged the chief federal prosecutor to tread softly in applying the foreign agent law too broadly.

“Analyze this practice to avoid errors and to see if any organization has been rated as foreign agent, although it does not engage in politics,” Putin told Chaika during the meeting, representing the third time he has modestly conceded that the new NGO law has overshot its mark.

The Kremlin’s March Madness against NGOs

Beginning in March, regional prosecutor’s offices, the Justice Ministry, and the tax, health and fire inspectorates mounted unannounced sweeps on some 2000 NGOs to make sure the were adhering to the new NGO legislation.

Thirty-six groups have had legal action brought against them in the form of court summonses or official prosecutorial warnings for failing to register as foreign agents, according to Agora, an NGO that provides legal assistance to other NGOs and is itself one of the 36.

Countless others, including ERC Bellona, have been threatened with fines for arbitrary and fluidly applied violations of health and fire safety codes. Often these fines can exceed the $13,000 proscribed for NGOs who refuse to register as foreign agents. ERC Bellona, in St. Petersburg, which was raided on March 19, could face fines possibly amounting to as much as $20,000 for health and fire code issues.

One organization, the vote monitor Golos, which unearthed massive fraud in December 2011’s Duma elections, which heavily favored Putin’s United Russia party, has already been found guily of violating the law by not registering as a foriegn agent. The group says it has paid the fine and will disband the group and refound another NGO fulfilling the same purpose, but which will have a separate wing for accepting funding.

And a total of eight organizations have filed complaints with a Moscow court against the sweeping searches conducted by the prosecutors’ office and other government agencies, and demanded that the court acknowledge the raids as illegitimate, Itar-Tass reported.

Putin has gone so far in all of his climb-downs regarding the law to emphasize he is ready to see proposed amendments that would differentiate NGOs receiving foreign funding for apolitical work, such as patriotic activities, humanitarian aid, medical assistance, environmental protection, and others that the government thinks engage in political activity linked to internal functions of the Russian state.

“If the need arises to make adjustments, please formulate your proposals jointly with experts, and then we will discuss them with the State Duma,” Putin told Chaika. “We need to mark off where pure politics, and inner political or humanitarian activities lie.”

But, according to Nikitin, this apparent softening of Putin’s tough guy rhetoric will not end his self-imposed mandate to winnow civil society movements down as far as possible.

But amendments won’t save most

“They won’t give up their aim of singling out the NGOs that engage in political activities and that receive money from abroad, and they will squeeze them out of the public domain,” Nikitin said.

He said that the movement against NGOs echoed Putin’s move to restrict the plurality of Russia’s political parties, which stood in opposition to the Kremlin backed United Russia party  – which introduced the foreign agent legislation.

“The political field in which political parties exist has been purged,” said Nikitin. “Now they are purging the field in which NGOs operate, because these might inspire some kind of revolutionary threat.”