As crackdowns on Russia’s NGOs continue under the new “foreign agent” law passed by the Duma last summer, which went into force in November, Bellona’s St Petersburg office – like dozens of other NGOs across the country – could be held liable for alleged paltry violations that nonetheless carry heavy fines. 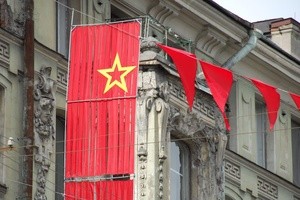 Though ERC Bellona’s management has been summoned several times to St. Petersburg’s Central Prosecutors’ Office since it was first raided in late March by an array of officials from the tax inspectorate, the health and sanitary inspectorate and prosecutors’ office for possible assessment of these fines, prosecutors have still reached no decision as to whether fines will be assessed.

Bellona-Murmansk was also asked to turn over numerous documents to prosecutors there on April 12, but its director, Andrei Zolotkov, said the request came by phone, not in an unannounced raid.

Zolotkov has visited Murmansk prosecutors twice, but has been keen to emphasize that the meetings have been “civilized,” and that there is as yet no call for alarm.

But recent government activity against NGOs in Russia is suggesting that many environmental organizations may soon face the full brunt of the new legislation, including hefty fines, closure, and jail time for failure to register themselves as so-called “foreign agents.”

The Duma last year passed a law obliging all NGOs who receive money from abroad and engage in vaguely defined “political activity” to register as foreign agents in an overture activists slammed as a throwback to Soviet times, which ramped up when President Vladimir Putin was elected to his third term in office last year.

When the law took effect in November, not a single NGO registered itself as a foreign agent, including ERC Bellona and Bellona-Murmansk, who have both said their environmental activities are entirely apolitical.

In late March, unprecedented and widespread swoops and unannounced raids headed by seemingly unconnected federal bodies swept Russia’s NGO community, forcing NGOs to compile reams of documents at a moment’s notice and appear before prosecutors to face possible fines over a variety of hazy charges.

“I can not remember such a massive attack on NGOs, even in the Soviet period,” said Alexander Nikitin, chairman of ERC Bellona.

The group of officials that made the unannounced visit to ERC Bellona came from the tax inspectorate, the health and fire inspectorates, and the prosecutors’ office.

According to Nikitin and ERC Executive Director Nikolai Rybakov, the prosecutors’ representatives tried to seek out so-called extremist literature, but came away empty-handed.

A number of other organizations, in the meantime, are facing the full force of the new law for refusing to register as foreign agents.

On April 25, the independent vote monitoring group Golos became the first organization to get hit with a $10,000 fine, plus a $3,000 fine for its director, in a Moscow courtroom for failing to self-apply the Stalin-era foreign agent moniker, Agence France Presse reported. The fines levied against the group are the highest the new law provides for.

Russia’s Ministry of Justice accused the group of receiving money from abroad and failing to declare itself a foreign agent, said AFP.

Golos told the Russian news portal Polit.ru that the funding in question was €7,728 in prize money for the Andrei Sakharov Freedom Award given to the organization in 2012 by the Norwegian Helsinki Committee. Golos said it returned the award, and has not received any foreign funding for its operations this year.

Other organizations that are being hauled to court for failing to register as foreign agents include the Kostroma Center for the Support of Public Initiatives, whose directors told the Washington Post that they fell under the heel of the new legislation for hosting a roundtable discussion in which a member of the US Embassy staff participated.

The Kostroma chapter of the Soldiers’ Mothers, a group that defends the rights of Russian military conscripts, was also given a notice of violation by prosecutors for allegedly running askance of the foreign agent law for participating in the roundtable.

According to the Post, however, the group got off with a warning that it would be prosecuted should it participate in similar activities again.

First environmental groups to be cited under foreign agent law

More chilling, according to Bellona’s Nikitin, is the plight of Baikal Ecological Wave, which on April 23 was warned by prosecutors it would be dragged to court should it refuse to register as a foreign agent.  Just such a notice of violations was received by Golos before its administrative court prosecution began.

Long a subject of surveillance by the Russian security forces for its activities in directing oil pipelines away from Lake Baikal, the world’s largest fresh water lake, Baikal Ecological Wave’s director, Marina Rikhvanova, was awarded the prestigious Goldman Environmental Prize – widely termed the Nobel Prize for environmentalism – in 2008. Her nomination was supported by Nikitin – himself a 1997 Goldman laureate.

According to Nikitin, the group is the first entirely environmental, non-political NGO to face the full brunt of the new legislation.  ERC Executive Director Rybakov, who has spoken with Rikhvanova, said by email that the group is not ready to make any formal statements yet.

Other eco-groups under the gun of possible foreign agent prosecution

Greenpeace Russia compiled a list (in Russian) of other ecological NGOs that have received notices of violation or admonitions from prosecutors for not registering as foreign agents. The group posted the list on its website Monday.

Among them are the Amur Region’s AmurSoES ecological organization; the Chelyabinsk Regional charitable fund For Nature; the Khabarovsk Regional charitable organization Green House; Novosibirsk’s Siberian Ecological Center; the Ulykitan Environmental Club in the Amur Region; Vladivostok’s Phoenix Fund; the Altai Republic’s Tengri School of Ecology of the Soul; the Altai Republic’s Association for Specially Protected Nature Preserves; the Center for Ecological Education of the Sakha Republic in Yakutsk, and Yakutsk’s Eyge ecological organization.

According to the Greenpeace list, two other Murmansk area environmental organizations also received notices of violations: the Kola Ecological Center and the Kola Center for Nature Preservation (both websites in Russian).

Greenpeace reported that all 11 organizations had been issued notices of violation of the foreign agent law because their charters listed points about their right to participate in government environmental decision-making processes, which, according to prosecutors, is “political activity.”

The prosecutors’ formulation, noted Greenpeace, flies in the face of the Russian Constitution’s guarantee for Russian citizens to “participate in the management of government activities as individuals or through their representatives.”

Neither ERC Bellona, nor Bellona-Murmansk office, were cited in the Greenpeace list of organizations that have received notices of violation. Neither has Greenpeace been served with such a prosecutorial writ, leading some observers to suggest that the Justice Ministry and prosecutors are making an example of smaller, more vulnerable NGOs.

ERC Bellona’s situation with prosecutors is still murky. Over four visits to the prosecutors’ office, no decision has yet been handed down about whether to fine the organization for a number of alleged health and fire code violations, the fines for which could add up to as much as $20,000.

Executive Director Rybakov has visited the prosecutor on three separate occasions only to be turned away as prosecutors said they were still examining evidence, or to hear that prosecutors required repeat submissions of documents ERC Bellona already compiled and delivered to them on short notice after the raid in March.

When ERC Bellona was last summoned to the prosecutors’ office on April 26, Rybakov was away on a business trip and instead sent the organization’s lawyer, Artyom Alexeyev, and ERC Bellona’s energy projects coordinator, Ksenia Vakhrusheva.

The presence of Rybakov or Nikitin is necessary, said Bellona’s Russia Group leader Vladislav Nikiforov, as the prosecutors’ office intends to file a number of administrative charges against the organization, which, in turn, requires a formal response from ERC Bellona’s management.

It is not known precisely what the exact charges are but Nikiforov postulated that at least three charges could be brought.

The first, he said, is an alleged violation of legislation on sanitary and epidemiological welfare. This, said Nikiforov, was likely related to issues concerning the failure of some ERC Bellona employees to receive annual chest x-rays. The charge carries a maximum fine of $700 or 90 days closure of the office.

The second slightly more obscure charge is a supposed violation of sanitary and epidemiological requirements for operation of residential buildings and public spaces, buildings and transport, which likewise carries a maximum $700 fine or 90-day office closure.

Niktin said he doesn’t fear that any of these charges can be upheld, and further added that there was nothing to fear from financial and tax monitoring, as ERC’s bookkeeping is transparent.

What is more dicey, said Nikitin, where alleged fire code violations, which can be broadly interpreted, selectively applied and lead to high fines or closure of the office.

According to Rybakov, during the initial raid, the fire inspectorate said ERC Bellona office was allegedly short on fire extinguishers. Fire officials also cited that a door to a conference room in ERC Bellona’s office was too narrow.

Nikitin expanded on Rybakov’s tally of alleged infractions, saying the fire inspectorate alleged faulty electrical contacts, and that lattice work outside the office’s windows – used to protect it from burglary – closed off possible escape routes. The fire inspectorate also cited supposed insulation problems in the walls.

Nikiforov said that it remains “absolutely unclear as what to expect.” But he also emphasized that the fines cited are the maximum. “It does not mean Bellona will receive them,” he said.

At present, as Russia plunges into its two weeks of annual May holidays and business grinds to a halt, another meeting with prosecutors has yet to be scheduled.

Both ERC Bellona and Bellona Murmansk work with questions of environmental and nuclear safety and clean up, industrial pollution, renewable energy, wind energy and questions of preserving the Arctic ecosystem.