Prosecutors in St. Petersburg have finally signaled their intention to fine the Environmental Rights Center (ERC) Bellona by launching two administrative cases relative to alleged health and fire code violations, but will be leaving it to St. Petersburg’s health and fire inspectorates to determine the size of the fine. 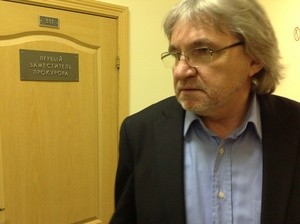 Surprisingly, prosecutors also said they intended to launch a case into serious environmental violations brought to their attention by ERC Bellona.

While greeting that as a silver lining, ERC Bellona Chairman Alexander Nikitin said the fines, as threatened previously could be has high as $20,000, but he added immediately that were ERC Bellona found guilty of any of the so-called administrative violations, it would appeal the decisions immediately.

Since late March, a wide array of Russian authorities, ministries and federal agencies have been conducting raids on NGOs in conjunction with the new foreign agent law, trying to reveal administrative violations that can be very fluidly and arbitrarily interpreted – and lead to crippling fines.

Some 600 Russian NGOs have faced similar unannounced inspections and are one by one being charged with administrative violations. At the beginning of this month, the government began targeting ecological groups with these notices of violation and by last count, according to Greenpeace, 30 plus environmental organizations are being harassed into registering as foreign agents under the new law

After the March raid on ERC Bellona, which was led by prosecutors, and representatives of the health and fire inspectorates, ERC Bellona was required over a three-day period to compile 15 tomes of documentation for prosecutors, according to ERC Executive Director Nikolai Rybakov.

After several visits to prosecutors when Rybakov was turned away without answers, prosecutors on May 10 finally gave ERC Bellona lawyer Artyom Alexeyev a six-page list of health and fire code norms they alleged the organization had violated, and said ERC Bellona had 30 days to rectify them. Rybakov returned 76 documents on May 14 to the prosecutors proving that violations were either non-existent or being addressed.

The May 10 list from the prosecutors office was also accompanied by a personal fine of 5000 rubles ($162) against ERC Bellona bookkeeper Lyubov Yeramakova, for an alleged violation of Russian statistical codes.

Rybakov was summoned by letter to appear before prosecutors on May 13, but was turned away when they said they would deal only with Nikitin.

Prosecutors told Nikitin Thursday that they would fine the statistics bureau 5000 rubles as well, as they had failed to inform Yermakova of changed regulations, the violation of which led to the fine imposed against her.

Nikitin also noted that the prosecutors had marked up and corrected some 95 percent of the violations that ERC Bellona was presented with on May 10. But he said that the high number of errors in the prosecutors documents would not serve reduce the amount of the fine the organization may face.

“We have worked to eliminate anything that might constitute a fire code violation, so there is no foundation to any of those charges,” said Nikitin from St. Petersburg. “The remaining charges, ones having to do with the health code, as simply fantasies.”

Prosecutors also issue a formal warning to ERC Bellona Chairman Alexander Nikitin for him and the organization to refrain from political activities or face the burnt of the new law that forces NGO’s who receive foreign and are engaged in vaguely defined “political activities” to register with the Russian Justice Ministry as spies.

Nikitin has repeatedly stated that ERC Bellona is not, as an environmental organization, engaged in politics, and has broadly declared since the foreign agent law took effect in Novemeber that the organization will never register as a foreign agent because it is not required by the law to do so.

NGOs across the board in Russia boycotted registering.

Nikitin was asked while at the prosecutors’ office to write and sign a statement that should ERC Bellona ever engage in political activities, it would register itself as a foreign agent.

Nikitin described the warning that he was given to read as a detailing of the amount of foreign funding the organization had received over the last two years. The protocol noted that ERC Bellona does receive foreign funding, but also detailed that the foreign cash it receives is put toward educational environmental seminars and projects.

ERC Bellona, said Nikitin, therefore, has not fall under the gun of dozens of other NGOs who have been found guilty of running askance of the foreign agent law. Nor is it included in any lists of organizations that have received warnings to register as foreign agents, as of May 20.

Nikitin was also asked why he was reluctant to register ERC Bellona as a foreign agent. He explained that foreign foundations are wont to sponsor perceived political activity, and that registering as a foreign agent is tantamount to admitting that ERC Bellona is engaged in political activity, which would lead to an immediate evaporation of foreign funding.

“At the moment our situation is something like being tied to a post in front of a firing squad,” he said. “No guns have been fired yet, but the authorities are observing us very closely – if we do something wrong the will shut us down.”

The administrative charges the prosecutors allege against ERC Bellona have mainly to do with the health and fire codes, and were characterized by Alexeyev, ERC Bellona’s lawyer, as “ an entire catalogue of violations, the majority of which are fantasies of the regulatory bodies.”

One exotic claim prosecutors allege is the epidemiological and radiation hazards posed by spending more than 50 percent of work time in front of a computer. Prosecutors said ERC Bellona had failed to compel employees to receive regular chest x-rays and photo flourograhic exams in keeping with Russia’s labor codes on “arduous labor conditions.”

He further furnished independent documentation that air quality, electromagnetic fields, artificial lighting conditions, vibration, noise, level of positive and negative air ions in the office’s air, and the content of harmful chemical substances present in the office’s atmosphere were well within specifications.

Originally cited on March 19 as having too few fire extinguishers, the organization has now purchased one for every room in the office.

It has also worked to bring its fire alarm up to specification after fire alarm regulations changed after ERC Bellona took occupancy of its office on Suvorovsky Prospect in 2007. The engineering and installation of new equipment costs some 100,000 roubles ($3,200).

Rybakov also documented that the organization has well displayed fire evacuation instructions; something the fire inspectorate alleged was not the case in its March raid.