Prosecutors in St. Petersburg Tuesday finally turned over their complete list of alleged administrative infringements of fire and heath codes to Artyom Alexeyev, lawyer for the Environmental Rights Center (ERC) Bellona, and handed down a summons to the group’s director to appear at the prosecutor’s office on Monday, May 13, for the beginning of administrative proceedings that could end in a $20,000 fine. 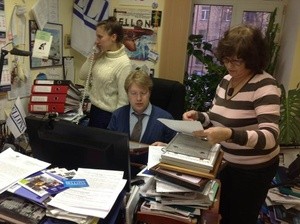 At the same time, prosecutors handed down a personal – as opposed to an organizational – fine to ERC Bellona’s bookkeeper Lyubov Yermakova totaling 5000 roubles ($160) for allegedly neglecting to submit a document confirming the number of people ERC Bellona employs – even though these documents were submitted in March.

The fine was based on alleged violations of norms laid out by Russia’s federal statistics body.

ERC Executive Director Nikolai Rybakov immediately shot back a retort to the prosecutors’ six-page list of accusations challenging each of them, and backing it up with 76 pages of additional documentation from the organization.

Since late March, a wide array of Russian authorities, ministries and federal agencies have been conducting raids on NGOs, trying to reveal administrative violations that, according to ERC Chairman Alexander Nikitin, can be very fluidly and arbitrarily interpreted.

Since then, Rybakov has been called to prosecutors at least five times in a push-pull for further documents, in many cases documents that had already been submitted.

Some 600 Russian NGOs have faced similar unannounced inspections and are one by one being charged with administrative violations.

ERC Lawyer Alexeyev wrote in emailed comments that Monday’s letter from the prosecutors’ office “was all the same as was [earlier alleged], only all of it collected together – an entire catalogue of violations, the majority of which are fantasies of the regulatory bodies.”

Yet, the new inclusion of the personal fine for Yermakova, and dense legalese tediously detailing chapter and verse of supposed fire and health code violations given to Alexeyev indicates to Nikitin that the administrative charges are sliding far off the rails, and that prosecutors will likely seek the maximum $20,000 penalty for the alleged violation, despite Rybakov’s documentary proof that the prosecutors’ concerns have been addressed.

“This approach indicates that authorities are looking for an excuse to for blackmailing money out of NGOs,” said Nikitin. “This is clear government strong-arming in an attempt to bleed money from NGOs off to the state.”

Nikitin’s complaint is far from uncommon among Russian NGOs in the wake of the law passed last summer by the Duma requiring NGOs that receive foreign funding to register as “foreign agents.” NGOs have boycotted registering themselves under the Stalin-era moniker.

In early March, President Vladimir Putin, who has almost single-handedly orchestrated the harassment of NGOs, claimed in an interview on German television that during the four-month period between the adoption of the foreign agent law over last summer and its entry into force in November, 654 NGOs had received nearly $1 billion in foreign cash – a figure twice as high as NGOs were documented to have received for the entire previous year, Russian media outlets reported.

NGOs across the board declared Putin’s claims to be false, and demanded that Putin make public evidence behind his figures. Nikitin criticized the president’s remarks as an attempt to create the erroneous impression that NGOs were awash in cash.

Several days later, the Prosecutor General of Russia said Putin’s figures were accurate and that they were prepared to make the information behind them public. So far, though, they have not.

According to the letter composed by a prosecutor identified as O.A. Levchenko, ERC Bellona will have 30 days to rectify heath and fire code infringements detailed in the letter, many of which range from arbitrary to outright bizarre.

The epidemiological dangers of working with computers

One of the more eccentric claims made by prosecutors against ERC Bellona alleged the office’s use of computers violated a number of health and epidemiological codes.

According to Levchenko’s accounting, “employees working with computers for more than 50% of work time {…} must undergo obligatory preliminary medical examinations at the beginning of employment, and periodic ones within the proscribed regime [established by] the Sanitary Rules and Norms 2.2.2./4.1340.03 ‘Hygienic requirements of personal computer machinery and work organization’ with the aim of preventing outbreaks and spreads of infectious illnesses.’”

Levchenko further wrote that ERC Bellona’s has neglected to conduct preliminary medical exams and further preventative medical exams that are proscribed by the Russian Ministry of Health and Social Development’s order “On the establishment of a catalogue of harmful and/or dangerous workplace factors and work which requires obligatory preliminary and periodic medical examinations, and the regimes of conducting preliminary and periodic medical examinations of employees engaged in arduous labor condition and working with harmful and/or dangerous labor conditions.”

He continued to accuse ERC Bellona of giving no information relative to photo fluorographic inspections of employees – which would measure their exposure to fluorescent screen x-rays; the absence of laboratory tests and experiments connected to the observance of sanitary rules and sanitary anti-epidemic measures of ERC Bellona’s employees and their office as a result of their work with computers.

He is also cited the organization for having no test results on the effects of vibration, noise, artificial light sources, levels of electromagnetic radiation, the level of positive and negative air ions in the office’s air, and the content of harmful chemical substances present in the office’s atmosphere.

Other health code violations include ERC Bellona’s failure to direct its employees to have regular chest x-rays to determine whether they have been exposed to tuberculosis.

Rybakov showed a copy of his communiqué to Levchenko to Belllona Oslo, which included reams of expert opinion presented in protocols that indicated measurements of electromagnetic fields, microclimate, radiation safety, meteorological factors, and lighting conditions in the ERC Bellona office, were safe.

He also included protocols on laboratory tests establishing the safety of the office’s tap water, which is required to refute charges brought by Levchenko under a selective application of Russia’s consumer rights laws.

Rybakov furnished evidence that ERC Bellona was currently consulting with a privately owned fire alarm country to bring its alarms up to date within the 30 day deadline Levchenko gave the organization to right perceived violations.

Nikitin said that reengineering the fire alarm system to bring it into compliance with regulations, which were changed between 2007, when ERC Bellona took occupancy of its office on Suvorsky Prospect, and 2013, would cost some 100,000 roubles ($3,200).

Rybakov confirmed that was the case, and wrote in his letter to Levchenko that, “at present, a supplement to the existent agreement on fire safety service about an extension to its period of use” is being prepared.

As to Levchenko’s allegation that fire evacuation plans were not clearly displayed, Rybakov denied that, citing the same rules of fire safety regimes.

“In keeping with Rules of Fire Safety Regimes […] on evacuation in case of a fire, as well as a system of alerting people of a fire, there must be developed and displayed in conspicuous places if more than 10 people work on the floor,” wrote Rybakov. “From the assertions [forwarded from the prosecutor], it follows that eight people work at ERC Bellona. At current, evacuation plans are displayed in the office.”

Rybakov also wrote that the organization has acquired three new fire extinguishers, which ensures that every room in the office now has one. He forwarded documentation to Levchenko confirming the presence of the new extinguishers

Rybakov also confirmed that supposedly flammable material behind one of the offices wall panels had been removed. He also furnished proof that electrical power installations in the office correspond with fire safety regulations, as so proven in a check by Gosstandart, Russia’s federal agency on Technical Regulation and Metrology.

Rybakov summed up that all fire safety requirements have been met during preparations for putting the new fire alarm system into use, as confirmed by a deed of acceptance – a copy of which Rybakov sent to Levchenko in the 76 pages of new documents.

He also noted that a copy of the contract for the services of the fire alarm company –which Levchenko cited as a violation in his Tuesday letter –was not furnished because it was never requested by prosecutors and fire officials in their original March 19 raid.

“Because of this, ERC Bellona cannot agree with the presentations of representatives of the Ministry of Emergency Situations and the Federal Oversight Service for Consumers’ Rights and Human Welfare,” two organizations that were instrumental in guiding the form of Levchenko’s complaints, wrote Rybakov.

Absent from Levchenko’s Tuesday letter concerning alleged fire code violations were accusations raised during the March 19 raid that a conference room door was too narrow, and citations of the office’s anti-burglary screens on the windows preventing evacuation.

In answer to Levchenko’s questions on the organization’s foreign funding, Rybakov referred the prosecutor to Bellona.ru for a full list of ERC Bellona’s foreign and domestic donors.

As to Levchenko’s requests for accountings of expenditures to foreign donors, Rybakov responded that such accountings are not required. He did, however, furnish in his response – for the second time – an entire accounting of the activities that were mounted with donor financing in 2012.

Rybakov also sent repeat accounting documents on business travel expenses, which the organization had already furnished to prosecutors on March 19.

“ERC Bellona’s accountings to the prosecutors office are exhaustive and prove the organization is in compliance with Russian workplace financial, health and fire regulations,” said Bellona General Director Nils Bøhmer.

“Bellona, of course, focuses an enormous amount of attention on the safety of its employees and ERC Bellona has documented that it has done that and then some,” said Bøhmer.

”If ERC Bellona’s meeting with prosecutors on Monday results in a fine, it will be proof that that the inspections are nothing but government harassment,” he said.