Prosecutors in St. Petersburg Wednesday for the second time delayed a decision as to whether or not they will fine the Environmental Rights Center (ERC) Bellona for alleged infractions of fire codes, air quality and a host of other complaints, ERC’s executive director, Nikolai Rybakov said. 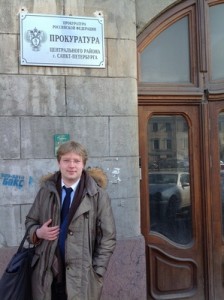 The first summons to the prosecutors’ office came last Wednesday after an unannounced visit on March 20 to ERC Bellona by Russian authorities ranging from the fire department, the health and sanitary inspectorate as well as representatives of the Prosecutor General.

Rybakov was told last Wednesday that a decision to fine the organization as much as $20,000 would be put off for a week.

Today Rybakov said by telephone that prosecutors told him the meeting would again be put off for about a week, but no date has yet been set.

Rybakov reported that the prosecutors didn’t give him an explanation for the delay.

“We have furnished the prosecutors with 15 tomes of information that have been under review,” he said. “Today they would not tell me the reason for the delay” on the decision about the fine.

ERC Bellona has been caught up in the grind of hundreds of similar unannounced visits to NGOs throughout Russia by brigades that include an array of various officials that began late last month.

Groups such as Memorial, Human Rights Watch and Amnesty International have been included in the unannounced raids and ordered to produce reams of documentation, various news agencies have reported.

The main targets of these visits seem to be organizations that received their funding from abroad.

That has led Alexander Nikitin, chairman of ERC Bellona, to say the raids are tied to Russia’s new law requiring NGOs receiving foreign funding and that are engaged in vaguely defined “political activity” to register as “foreign agents” with Russia’s justice Ministry.

Nikitin has said that in the event ERC Bellona is fined, the organization will appeal the fine in court until it is overturned.

“I imagine that will be the case with all NGOs receiving fines,” said Nikitin. “The appeals courts will overburdened.”

Meanwhile, he said, the checks are ongoing.

Vote-monitoring NGO being tried for violating the law

Yesterday the stakes in the Kremlin’s campaign against NGOs were ratcheted up considerably when Golos, the vote-monitoring agency that discovered fraud in Russia’s December 2011 Duma elections, was summoned to court for not registering itself as a foreign agent.

Golos’s discovery of the poll fraud sparked months of street protests in Moscow, St. Petersburg and other major Russian cities.

The Moscow Times reported that a statement posted on the Justice Ministry’s website (in Russian) said that since 2008, Golos had promoted a unified election code, which the web statement claims seeks to alter existing Russian legislation.

Golos told the paper yesterday that it had received no foreign funding for its operations this year.

According to Nikitin, no NGOs have as yet registered themselves as foreign agents.