Russia’s Ministry of Justice is showing a pronounced reluctance in applying the country’s new NGO law that requires non-governmental entities operating there that receive foreign funding and engage in “political activity” to register with the Ministry as “foreign agents.”

Published on January 23, 2013 by Charles Digges 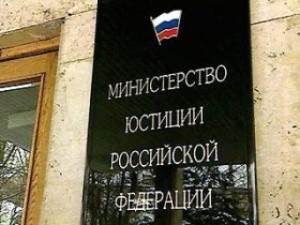 The Ministry just yesterday turned down the application of the human rights organization Shchit i Mech (Shield and Sword), which operates in the Republic of Chuvashia and receives the bulk of its funding from Agora, another primarily foreign funded NGO, to register itself as a foreign agent.

Since the law came into force on November 21, Shchit i Mech is the single foreign funded organization of hundreds impacted by the law that has actually tried to register itself with the Justice Ministry.

The rest of Russia’s NGOs have collectively boycotted the registration process.

Last week, Russia’s Justice Minister, Alexander Konovalov, spoke before Russia’s Duma and said the new law was impossible for him to enforce because his Ministry did not have the capability to check each source or foreign financing, or establish whether an organization registering as a foreign agent was engaged in political activity.

But Alexander Nikitin, chair of the Environment and Rights Center (ERC) Bellona, Bellona’s St Petersburg office, forecasted that the Ministry will get its problems sorted soon enough, putting the Kremlin back into business intimidating NGOs.

Rejected as a foreign agents

Shchit i Mech’s director, Pavel Chikov, yesterday told the Russian language news portal Lenta.ru that his organization’s initial intention in trying to register itself as a foreign agent was to test how the new law would be applied, and confirmed that its request for the “foreign agent” moniker had been turned down.

Its patron organization Agora, which receives its operating money from the foreign organization Interviews, had earlier tried to elucidate the foreign agent registry process by contacting the Ministry of Justice before the registration deadline.

The Ministry told the group that it could offer no information to Agora on how to register because it was not allowed to furnish the information to NGOs. Agora subsequently filed suit in a Moscow court over the glaring contradiction.

In his appearance in the Duma last week, Justice Minister Konovalov confirmed that only Shchit i Mech had made any attempt to try to register as a foreign agent.

He also spoke out surprisingly in muted favor of NGOs, telling Duma deputies that the law contradicted the spirit of Russia’s already existing law on NGOS.

But Konovalov also qualified his remarks, saying that he did not consider the new foreign agent law to be repressive.

“We are not talking about the authority of the Ministry of Justice, which was assumed [by the law’s adoption] to launch active and strict audits, attacks … and the formulation of gigantic lists and terrifying sanctions,” he said in remarks reported by Lenta.ru.

He went further in his Duma appearance to say that his Ministry was in no position to establish whether an NGO was financed from abroad, nor whether it was engaged in political activity.

Konovalov added that his Ministry received information about foreign funding from the NGOs, which they already keep track of under the earlier NGO law, from individual NGOs themselves.

As to whether NGOs engage in political activity, Konovalov told the Duma that attempts to established that “could cause arguments and discussions that reach all the way to the Constitutional Court,” Russia’s highest court.

Nikitin said that, “The Justice Ministry and its associated structures are in a difficult situation. Putting this law into effect immediately is impossible.”

“And closing NGOs is impossible before they collect information from financial oversight and law enforcement structures – that is before they can define who is receiving money from abroad and who is engaged in political actions,” Nikitin said, adding, “After they collect this information, the Justice Ministry will start checking NGOs and whether to shut them.”

Nikitin said that the Ministry of Justice is scheduled to review the activities of ERC Bellona toward the end of 2013, “so we will see then,” he said.

NGO law part of a series of repressive reforms

Russia’s so-called “foreign agent” NGO law, which was resoundingly passed by the Duma over the summer in a dash, has drawn fire from international governments, Russian legal circles, and activists themselves, who say the foreign agent term they would be forced to self-apply is heavily reminiscent of the Stalin era.

Bellona, too, which is also examining how the law would be applied, has said that the law’s requirement that “foreign agent” be stamped on all of its literature would damage the organization’s relationship with foreign funders, who are leery of giving money to organizations whose work smacks of being political.

The international community and many in the Russian legal circles have said it is a part of a raft of laws passed by the Duma and signed in the early days after president Vladimir Putin’s inauguration to a third term on May 4.

For its part, Kremlin backing of the law has relied heavily on anti-foreign, especially anti-American influence, and has accused the US State Department of funding anti-Russian government activities via funding to NGOs.

The first US donor organization operating in Russia to be dismantled by the new law was USAID, which was forced to cease operations in Russia by the Justice Ministry on October 1.

Among some of the most prominent Russian groups boycotting registration under the new law are the anti-corruption watchdog Transparency International, the Moscow Helsinki Group, and Memorial, which documents human rights abuses.

The offices of Transparency International and Memorial were both vandalized on November 21, the day the foreign agent law took effect, when the offices were spray-painted with slogans like “Foreign Agent” and heart signs followed by “US.”