Published on December 12, 2012 by Charles Digges 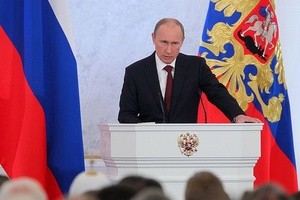 He said it should be illegal for anyone who receives money from abroad to be a politician in Russia.

“Direct or indirect outside interference in our internal political processes is unacceptable,” Putin said in his speech in the Kremlin, according to its transcript on the Kremlin’s website.

“People who receive money from abroad for their political activities – most likely serving foreign national interests – cannot be politicians in the Russian Federation.”

Putin also said parliament should introduce legislation to “limit the rights” of officials and politicians to have foreign bank accounts and shares.

But Bellona’s Igor Kudrik, an expert on Russian politics, said Putin’s emphasis on foreign funding for NGOs or politicians was just a red herring to distract from the corruption of his own government.

“Putin has been mumbling about fighting corruption since he came to power in the beginning of this century – what we have witnessed is that corruption has reached enormous proportions and there is no decline on the horizon, “ said Kudrik.

“NGOs are used as a decoy for Putin’s electorate to deviate their attention from the real problem. The real problem is corruption and the corruption is the foundation of Putin’s power. Without it he will loose his power and control,” he said.

Putin’s annual speech to the Federal Assembly of both houses of parliament came one year after disputed parliamentary elections sparked the first mass street protests against his domination of Russia.

In May, Putin returned to the Kremlin for a third term as president following his four-year stint as prime minister, with many activists and NGOs – including Bellona, which has two offices in Russia – criticizing him for swiftly striking back with a crackdown on civil society.

This included a law rushed through parliament forcing non-government organizations which receive money from abroad to register as “foreign agents,” a move activists said stigmatizes their work.

“[Putin] portraits NGOs as the main enemy,” said Kudrik. “All of his steps are predictable and boring as if taken from a textbook on how to be a pathetic dictator.”

Dozens of high profile NGOs said they would refuse to register themselves under the foreign agent moniker when the law took force on November 21. Many of these organizations were targetted for demonstrations and even vandalism by Kremlin-sponsored youth groups who filmed and bragged about their actions.

Russia in October also expelled US development agency USAID on the grounds it was funding pro-democracy projects, which Moscow said amounted to interference in its internal affairs.

Putin did not make specific reference to the protests but acknowledged the need for change in Russia while warning that dialogue was only possible with those acting within the law.

“A civilized dialogue is only possible with those political forces who put forward, justify and formulate their demands in a civilised manner and defend them within the bounds of the law,” Putin added.

“Changing, modernising a political system is a natural and even necessary process,” he said in the one-and-a-half hour speech.

He said that Russia needed more morality and spirituality in society but also said it was important that the authorities did not behave like an “isolated caste.”

The Russian opposition is planning a new anti-Putin mass rally on Saturday, which will be a crucial test of whether there is still life in the protest movement one year on.