Russian President Vladimir Putin has approved new members for an expanded Presidential Council for Civil Society and Human Rights, with the new appointments following a walk-out by some of his fiercest critics on the advisory body earlier this year.

Published on November 14, 2012 by Charles Digges 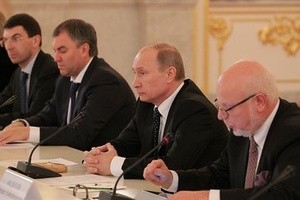 At the first meeting of the new council on Monday, Putin also said he was ready to revise many pieces of recently passed legislation that has torpedoed Russia’s efforts at developing civil society as well as other controversial legislation passed over the summer ‘”so that that a dialogue can be established, even though it may be difficult,” said new panel member Yelena Topolyova-Soldunova, who heads the nonprofit Agency for Social Information.

But with many of these crackdowns introduced as Putin began his third term as Russia’s president already well underway, it remains a question mark as to how the majority of them could be reversed.

In fact, Rossiskaya Gazeta, the official newspaper of the Russian government, Tuesday published Putin’s new law on expanding the definition of high treason, one of the most controversial bills to emanate from the Kremlin in recent memory, which many rights activists say makes having contact with foreigners a federal offence.

Putin told Monday’s meeting of the council that he would reconsider much of the working of the treason bill. Yet, publication of laws in Rossiiskaya Gazeta is the final step after they are signed by the president that brings them into legal force.

All of this begs the question as to how sincere Putin’s putative commitment to his new human rights panel really is.

The panel’s new composition and how it was chosen

In all, Putin increased his council’s membership from 40 to 62 after a walk-out that saw 16 members resign following Putin’s new ascension to office.

Also noteworthy are the names missing from the new council, including Lyudmila Alekseyeva, the 85-year-old figurehead of Russia’s human rights movement.

Alekseyeva, head of Moscow’s Helsinki Watch, is one prominent figure who left the presidential council in the wake of the disputed December parliamentary elections that were criticized for being skewed to favor the United Russia ruling party, and sparked a winter of hundreds of thousands strong street marches.

The departure of the previous16 members nearly halved the council’s membership. The panel’s head, Mikhail Fedotov, said at the time that, if 20 members left, he, too, would leave.

The new 62-member council was selected by an online vote.

A popular vote was held in early September, with more than 100,000 candidates registered. Eighty-six candidates were chosen by that vote, then they competed for 13 places, each one dedicated to a human rights issue in Russia, such as the rights of prisoners and the disabled, as well as public monitoring of the judicial system.

In a presidential decree on November 12, Putin officially struck Alekseyeva from the roster, along with commentator Dmitry Oreshkin, Yelena Panfilova of Transparency International Moscow, and Svetlana Gannushkina, head of the Civic Assistance organization, as well as a handful of others who tended their resignations this year.

The new makeup includes a mix of pro-kremlin members as well as son of its staunchest critics. Lilia Shabanova, head of the partially US-funded election watchdog Golos, renowned for its critical commentary on Russia’s electoral system is now a member. Young Guard, the youth branch of the Kremlin-puppet Duma party United Russia, also managed to get its representative, Yana Lantratova, into the council.

The council is an advisory panel established to assist the president in fulfilling his constitutional responsibilities to guarantee and protect human rights.

Its tasks also include helping the development of civil society institutions in Russia – something Putin has all but laid waste to seven months into his new term.

Since then, he has rushed through laws tightening controls on the Internet, forcing nonprofits that operate in Russia with the help of foreign funding to register as “foreign agents,” increasing the penalties for defamation, expanding the definition of high treason, and tabled a bill that would jail those who offend religious sensibilities.

Rights activists and groups –including Bellona – and political opponents say Putin has orchestrated the clampdown. The West has also expressed concern that civil liberties are being rolled back.

Many news organizations were earlier this week at pains to paint Putin as someone wishing to seek compromise and review some of the harsh new legislation passed on his watch with an eye to softening his stance –which, in the case of the treason law, he clearly had no intention of doing.

Putin also said he would “look again” at the NGO legislation signed in July, saying then its main aim was to prevent foreign meddling in Russia’s domestic affairs.

According to council member Natalya Yevdokimova, Putin was far more vitriolic on readdressing the NGO law than other issues.

Yevdokimova serves on the board of the Environment and Rights Center (ERC) Bellona, is the executive secretary of the St. Petersburg Human Rights Council, and a noted liberal talk show host.

“Putin heatedly said that foreigners are trying to influence Russia’s politics through NGOs that deal with political issues,” Yevdokimova said in an email interview.

“Mara Polyakova, a member of the old council, prepared a report on this question,” continued Yevdokimova. “She asked that the law be softened to exclude from the list of foreign agents NGOs that are ecological and human rights organizations. Putin promised to hold fuller consultations on this issue.”

Putin was more amenable, said Yevdokimova, to rephrasing the wording in another law that envisages stiffer punishments – such as higher fines and jail – for defamation, something rights activists have said could be abused to stifle critical commentary.

He also said parliament should not rush to adopt a law that would introduce jail sentences for offending religious feelings.

Too little too late?

According to Bellona’s Igor Kudrik, however, few to none of the reviews Putin promised at Monday’s meeting of his human rights council are likely to come to fruition.

“Regardless of how Putin is reportedly amenable to reviewing some of his most repressive legislation, the fact remains that the persecution has already begun,” said Kudrik. “These ships have already sailed.”

Kudrik reeled off the catalog of Putin’s promises and demonstrated how most of the repressive measures have already gained legislative traction – in some case even before the laws have come into effect.

Even though the new NGO law does not take force until November 20, one of Russia’s most significant foreign NGO donor organizations, the US Agency for International Development (USAID) was told by Russia’s Foreign Ministry to shutter its operations by October 1.

This summer case against the all-female punk collective Pussy Riot ended in convictions on charges amounting to blasphemy for three of the band members who performed a flash mod style 40-second long “punk prayer” asking “the Virgin Mary” to “get rid of Putin” at Moscow’s Christ the Savoir cathedral last February.

Although one band member was freed on appeal, the remaining two, who are both mothers of young children, were earlier this month sent to penal colonies to serve their two-year sentences.

On two separate occasions, Prime Minister Dmitry Medvedev called for the women to be freed, saying their five-months of pretrial detention were punishment enough.

Last week, Russia also put into effect broad restrictions on the internet, eliciting ire from international press groups. The bill, ostensibly aimed at protecting minors from objectionable web content, gives the government the right to shut down access to entire websites, even if it considers only one page to contain offensive material.

Ella Pamfilova, who headed the presidential human rights panel, said that its expanded form will preclude it from coming to “consolidated decisions linked by a single logic.”

Pamfilova said in interviews that the council was “no longer a community of likeminded people but a motley crew. Allowing more people into the council makes it unclear whose voice will be taken into account and whose will not.”

The previous council, she noted, had been appointed by her, rather than voted in by internet balloting.

Pavel Salin, a Moscow-based political analyst, says that the expansion of the council could be a trick to dilute staunch criticism from the council’s remaining tough critics with mild, Kremlin-friendly rhetoric.