Russia’s lower house of parliament unanimously approved amendments that would substantially broaden the legal definition of high treason so that it applies not only to acts that jeopardize state security but also undermine “constitutional order, sovereignty, and territorial and state integrity.”

Published on September 24, 2012 by Charles Digges 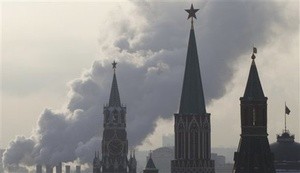 The unanimous vote follows the expulsion earlier last week of the United States Agency for International Development (USAID), who has been told to shutter its offices in Russia by October 1. It was accused using its money to influence elections – a claim the US denied.

The new treason bill also expands the interpretation of treason to include activities such as financial or consultative assistance to a foreign state or an international organization – something striking directly at the heart of Russian NGOs that rely on foreign funding.

Addressing lawmakers Friday, the deputy director of the Federal Security Service, or FSB – which authored the new bill – said the step was necessary because foreign intelligence services “actively use” such organizations “as a cover and they conduct independent intelligence activities,” according to Russian news agencies.

The new bill keeps the current punishment for treason at 20 years imprisonment.

Vladimir Putin has toughened his line on dissent following a series of major street rallies against his re-election to a third term as president in March, claiming that the protests had been staged by Washington in order to weaken Russia.

As a consequence, new repressive laws have been passed to deter people from joining protests, and opposition activists have been subject to searches and interrogations.

The highlight of these hardline measures are new amendments on the Russian law on NGOs, taking effect November 20, which require civil society organizations in Russia that receive funding from abroad to register with the Ministry of Justice as “foreign agents” and situate that appellation on all literature and websites they operate.

Should they fail to do so, say the new amendments, NGOs and their employees could face crushing fines, closure and jail.

Numerous powerful NGOs in Russia, such as Memorial and the Moscow Helsinki Group, have already said they will refuse to register themselves as “foreign agents,” a term that has deep roots in the Stalinist purges of 1937-38 – and which many NGOs say is designed to destroy their credibility among Russians.

Memorial issued a statement on Friday saying that it would not comply with foreign agent registration. The Moscow Helsinki Group has maintained that position since the law was passed over the summer.

To become law, the new treason bill must pass two additional readings and be signed by Putin, who is expected to support it.

Rights activists immediately condemned the initiative. They said the new bill is vague enough to allow the government to punish any critics.

“This is yet another bill from the series of recent laws meant to tighten the noose around the necks of Russia’s citizens, especially those who work with NGOS, who work as journalists, who work as researchers as well as those who work as scientists,” said Alexander Nikitin, chairman of the Environment and Rights Center (ERC) Bellona.

Nikitin, a former Russian naval captain, was himself was charged with espionage in 1996 for collaborating on a report with Bellona about the radiological dangers posed by Russians northern nuclear fleet. He was finally acquitted of all charges by the Presidium of the Russian Supreme Court in 2000, making him the only person to ever defeat Russia’s secret police structures in court.

“After this bill is adopted as law, practically every citizen of Russia that works abroad or with foreign organizations could at any moment be hauled in on espionage charges because these laws actually state that the characteristics [defining espionage] are ‘furnishing financial, material, technical, consultative or other help to a foreign state, international or foreign organization,’” said Nikitin.

Russian leaders “have now chosen an ideological course — you can even call it a national idea — to search for external and internal enemies,” Lev Ponomarev, a well-respected activist, said in an interview with independent broadcaster TV Dozhd.

“There will be a new twist of spy mania. They will prosecute civic activists, opposition politicians and rights defenders,” Ponomarev added.

Lyudmila Alekseyeva, head of The Moscow Helsinki Group, told the Interfax news service that she had “a feeling that they are again pulling down the Iron Curtain,” adding that the bill is aimed at “ending any independent public activism in the country.”

The Moscow office of Radio Liberty, which is financed by the American government, announced on Friday it was ending medium-wave broadcasts inside Russia because of a tough new media law that prohibits such broadcasting when more than 48 percent of an outlet’s founders are foreigners. It will continue its broadcasts online.

Accompanying the back out of USAID and Radio Liberty, Russia’s Central Bank announced on its website that any financial assistance received by Russian NGOs will be investigated as potential money laundering or financing that might be meant to fund terrorists, the daily Kommersant reported.

Banks receiving funding transfers for Russian NGOs from abroad will henceforth be required to report the transfers to the Russian Federal Financial Monitoring service.

Russian authorities are also discussing blocking access to YouTube.com, on the pretext of the recent spate violence stirred up in the Middle East and culminating in the death of Christopher Stevens, the US Ambassador to Libya.