UPDATE: Pussy Riot guilty on all charges of ‘hooliganism motivated by religious hatred’ and sentenced to two years in penal colony

A Moscow court today found guilty the three women from punk band Pussy Riot, who taunted the Kremlin from a church altar, of “hooliganism motivated by religious hatred” in what is seen as a darkening shadow of President Vladimir Putin’s iron fist over his opponents, sentencing each to two years in a minimum security penal colony. 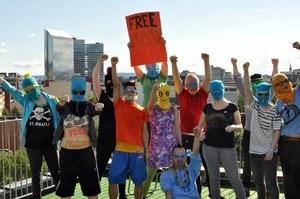 The three women from the five-member band were pronounced guilty by Judge Marina Syrova for performing a protest song in Moscow’s Christ the Saviour cathedral on February 21 – something Syrova said “crudely undermined social order.”

The women said their “punk prayer” was a political act in protest against the Russian Orthodox Church leader’s support of President Vladimir Putin.

Prosecutors sought a three-year jail sentence. But Judge Syrova, citing mitigating factors, including the fact that two of the women have young children,  and absence of prior criminal records, sentenced them to two years each, minus six months served in pretrial detention.

“Considering the nature and degree of the danger posed by what was done, the defendants’ correction is possible only through an actual punishment,” she said.

One man in the courtroom shouted “shame” at the sentencing, and there were chants and whistles from the band’s supporters outside.

Pussy Riot’s defence lawyer said before the verdict reading that they were hoping for an acquittal, “but they are ready to continue to fight,” according to televised remarks. An appeal is expected.

Syrova said of the group: “These three plus others… plotted together to undermine civil order, motivated by religious hatred.”

Their case has sharply divided Russia. Some believers feel offended, while other Russians are angered by what they see as repressive treatment for the expression of political beliefs. International concern from European governments is also being transmitted to Russian ambassadors. The women have been named prisoners of conscience by Amnesty International.

EU foreign affairs chief Catherine Ashton called the sentence “disproportionate.” In Washington, White House spokesman Tommy Vietor said the verdict was dissappointing. “While we understand the the group’s behavior was offensive to some, we have serious concerns about the way these young women have been treated by the Russian judicial system.

The US State Department all but called for Russia’s higher courts to overturn the conviction and “ensure that the right to freedom of expression is upheld.” Even some members of the Russian Orthodox clergy have said the case had gotten out of hand and is casting the church in a vindictive light, Russian press reports have said.

The case has been watched closely by Bellona as a litmus test on how far Russian human rights have been eroded by a host of new laws signed by Putin, particularly his restrictive new law on NGOs receiving funding from abroad. The law forces such NGOs to register as “foreign agents” with Russia’s Justice Ministry, and apply the label on all their publications, Bellona included.

“Essentially, it is not three singers from Pussy Riot who are on trial here. It is the entire state system of the Russian Federation which is on trial,” Nadezhda Tolokonnikova, 22, one the three defendants and the band’s lead singer, said in her closing statement last week.

“There should be no illusions about Putin being the evil suppressing a population that strives for democracy,” said Bellona’s Igor Kudrik.

“For Putin’s part, who has been lashed with tonnes of negative PR in western media, the logical outcome would have been to set the women free,” he said. “Then he would look like a natural born liberal who strives to sow the seeds of decency among a largely barbarian population and prove to the world that he is the only force that can keep Russia in order.”

Kudrik added, however, that, “[Putin] has done none of that, but I am sure the appelate courts will set them free once today’s verdict is challenged by the lawyers – but again this trial is not only endemic for Putin’s regime, this case is endemic for Russia as a country.”

Tolokonnikova, Maria Alyokhina, 24, and Yekaterina Samutsevich, 29, along with other members of their band, staged their 40-second long flashmob-style performance of their song, wearing colored balaclavas, short skirts and bright tights close to the altar in the cathedral on February 21.

Their obscenity-laced “hymn” implored the Virgin Mary to “throw Putin out.”

At the time, they left the Cathedral voluntarily, a summoned police officer only writing down the performers’ names. The three that sat trial were arrested and jailed two weeks later after Putin’s March 4 victory at the polls.

What did Putin decide?

Putin had signaled he was aware of the danger of appearing intolerant. He told reporters in London that although the band did “nothing good”, they “should not be judged too harshly.” He also insisted that it was for the court to decide the verdict, but few people in Russia believe that.

Tolokonnikova’s husband, Pyotr Verzilov, said, “Russia’s image was quite scary even before [this]. What happened now is a clear sign that Russia is moving towards becoming more like China or North Korea” in remarks to reporters after the verdict was announced

Opposition leader and anti-corruption blogger Alexei Navalny, who himself is awaiting a show-trial for alleged embezzlement, added: “They are in jail because it is Putin’s personal revenge. This verdict was written by Vladimir Putin.”

A poll released this morning by the Levada Center polling agency suggested that a majority of Russians, however, think the proceedings against the band have been conducted fairly, the daily Kommersant reported.

In that sense, Russian citizens got what they wanted with the two year sentence for each of the band members handed down today.

“The majority of people get their information through television and therefore know nothing or are comprehending events in line with the official version, that is as mockery and blasphemy,” Lev Gudkov, the Levada Center’s director told Kommersant.

The results of the poll suggest that those polled hold a very dim and conservative view of Russian society, said Guvkov.

“Society is aggressive, amoral, testing the demands of strict regimentation of behavior and needing authoritarian dogmatic champions of such authority,” he told the paper.

Not scared of jail but ‘politically furious’

On the eve of the verdict, Tolokonnikova said she was “not bitter about being in jail.”

But, speaking through her lawyer on Twitter, she said: “Politically, I am furious. Our imprisonment serves as a clear and unambiguous sign that freedom is being taken away from the entire country.”

Supporters of the women held protests outside Russian embassies around the world during the reading of the verdict by Judge  Syrova. Participating cities included London, Barcelona, Oslo, Belgrade, Berlin, Sofia, Dublin, Paris, Kiev, New York Ciy and many other world capitals.

The trial has exposed Putin to international criticism for politically motivated prosecutions, including from the US State Department, human rights groups and pop stars.

American singer Madonna donned a balaclava in a Moscow concert to show her support for Pussy Riot and stripped to her bra to show the band name scrawled across her back.

On Thursday, former president of the Soviet Union Mikhail Gorbachev told the BBC’s Russian Service the case should never have gone to trial, calling it “a completely pointless undertaking.”

In a manifesto issued by the band this week, Tolokonnikova wrote that the beliefs of the band are “political activism, ecology, and the elimination of authoritarian tendencies in the Russian state system through the creation of civil society.”

[picture2 {Oslo supporters of Pussy Riot turn out last week, decked out in the band’s signature masks and bright attire.}]

The three women, confined to a glass courtroom cage during the trial, say the February 21 protest was part of a broad movement against Putin’s and former President Dmitry Medvedev’s blithe announcement in November that they would simply be swapping places come election day, with Medvedev picking up Putin’s four-year stint as Prime Minister.

The band members deny intending to offend believers ­– the core accusation from the prosecution upheld by Judge Syrova  – and say they are victims of a crackdown on dissent in which the Kremlin has rushed through legislation to tighten its hold on its opponents following massive protests against Putin during the winter.

Indeed, while band has stood trial, 11 other young Russians are facing 10-year prison sentences for taking part in a sanctioned antigovernment protest in Moscow that erupted into clashes between police and demonstrators on May 6, the day before Putin’s inauguration.

While some of those detained are opposition activists, others appear to be people with no links to political, environmental, or rights groups.

This has raised suspicions that their legal woes are intended as a warning sign to Russians to stay off the streets.

Other new repressions since Putin’s heavily protested inauguration in May include staggering $9,000 fines for “disruptive” behavior during demonstrations, reinstatement of libel and slander as crimes punishable by jail, and unprecedented moves to strip opposition deputies of the Duma of immunity from prosecution for their dissenting political activities.