The judge presiding over the case of Pussy Riot, the all-female Russian punk rock collective that in February stormed Moscow’s Christ the Savoir cathedral and played a 40-second anti-Putin “hymn” postponed the verdict until August 17 after hearing closing arguments yesterday.

Published on August 9, 2012 by Charles Digges 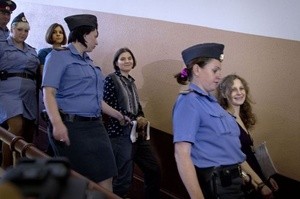 Photo: Republished with the permission of The Msocow Times/Igor Tabakov

Prosecutors called yesterday for three-year prison sentences for the band members instead of the seven they initially requested at the trial’s beginnig during their closing remarks. The prosecution said the case has no political undertones and that the trial is purely about religious hatred.

Nadezhda Tolokonnikova, 22, Marya Alekhina, 24, and Yekaterina Samutsevich, 29, three of the five bands members who where arrested after their lightning fast guerilla gig, have been in jail since their arrest on February 21.

They were charged with “hooliganism motivated by religious hatred,” to which they pleaded not guilty.

Their case has sharply divided Russia. Some believers feel offended, while other Russians are angered by what they see as repressive treatment for the expression of political beliefs. International concern from European governments is also being trasmitted to Russian ambassadors.

Orthodox leaders, nontheless, have ignored calls to pardon the women and urge the court to dismiss the case.

Pussy Riots’s trial is been seen as part of a widening government crackdown as Putin firmly entrenches himself for his third term.

The case is being watched closely by Bellona as a litmus test on how far Russian human rights have been eroded by a host of new laws signed by Putin, particularly his restrictive new law on NGOs receiving funding from abroad. The law forces such NGOs to register as “foreign agents” with Russia’s Justice Ministry, and apply the label on all their publications, Bellona included.

Other new repressions since Putin’s heavily protested inauguration in May include staggering $9,000 fines for “disruptive” behavior during demonstrations, reinstatement of libel and slander as crimes punishable by jail, and unprecedented moves to strip opposition deputies of the Duma of immunity from prosecution for their dissenting political activities.

Additionally, several protestors who turned out for the thousands-strong demonstrations against Putin’s inauguration are still awaiting trial in remand prison.

The audience of mostly journalists, human rights observers and band supporters exploded in applause with each passing summation delivered by Pussy Riot’s defense attorneys and the band members themselves, according to press reports, prompting reprimands from Judge Marina Syrova, who at one point said “the court is not a theatre.”

Some media outlets have speculated that the delay in the verdict could be an indication of ultimate acquittal after President Vladimir Putin’s remarks last Friday in London that the band should not be judged “too harshly.” Others say that the decision to postpone the verdict until after the conclusion of the London Olympics was made only to bury a guilty verdict in the news cycle and avoid international outcry.

Delayed verdict not unusual – but fails to assure fairness

But Alexander Nikitin, chairman of the Environmental Rights Center (ERC) Bellona said that Judge Syrova’s decision to postpone the verdict to a week from Friday was hardly uncommon.

“This is not at all unusual,” said Nikitin, who was himself charged with treason and espionage in 1995 for collaborating on a Bellona report on radioactive dangers posed by Russia’s northern nuclear fleet, and spent 11 months in pretrial detention. He was acquitted of all charges the presidium of the Russian Supreme Court in 2000.

“The judge has to write her entire decision for the verdict and explain why she chose to rule a certain way,” said Nikitin. “She will also be consulting and conversing with other legal parties – in this case most likely the Kremlin and the Church.”

Though jury trials are guaranteed by Russia’s constitution, Russians are exceedingly rarely tried by their peers, as most Russian courtrooms simply do not accommodate space for a juror’s box.

It is not likely that the decision in the high-profile case, ­ which has seen Pussy Riot declared Prisoners of Conscience by Amnesty International, would be formed independently by Judge Syrova, said Nikitin.

Samutsevich agreed, telling the court: “I am waiting for a guilty verdict,” according to numerous press reports.

But what shape that guilty verdict will take will be seen next week.

In the wake Putin’s seeming suggestion of leniency last Friday, some legal experts had suggested that the band may get off with a guilty verdict and a punishmet of the five months they have already spent in pretrial detention. But the surprising reduction to a three-year sentence suggested by prosecutors yesterday may be all the leniency the band can expect.

Samutsevich and her co-defendants launched blistering critiques of Russia’s political system when invited to make their final pleas yesterday.

“With every day an increasing number of people start to realize that if the political machine turned against girls who performed in the Christ the Savior Cathedral for 40 seconds, this means only that this political system is scared of the truth and the sincerity that we bring,” Tolokonnikova said from inside the wooden and transparent plastic cage she shared with her codefendants, surrounded by prison guards and a Rottweiler dog.

In a trembling voice and looking at prosecutors, Tolokonnikova said, “We have more freedom than all those people from the prosecution in front of me – because we can say what we want.”

“How is it that our performance has grown into such enormous trouble? In a healthy society that would not be possible,” said Alyokhina.

In her address, Tolokonnikova drew parallels with the show trials of the 1930s under dictator Josef Stalin. The band’s trial was a political order that sprang from an authoritarian political system, she said.

Samutsevich’s speech aimed at the links between the Russian government and the Orthodox Church.

Russia was a secular state, she said, and the overlap between the authorities and the Russian Orthodox Church must stop.

Pussy Riot has said their cathedral protest was inspired by an endorsement of Putin from the leader of the Russian Orthodox Church, Patriarch Kirill, in February.

Western rock takes up the cause

In her remarks, Tolokonnikova acknowledged support from Madonna, after the American singer said she was praying for Pussy Riot’s release.

Performing in Moscow on Tuesday, Madonna revealed to cheering crowds that she had “Pussy Riot” scrawled on her bare back, and briefly donned a balaclava, Pussy Riot’s trademark headgear.

Performers from the Red Hot Chili Peppers, Faith No More, Sting, Bjork and Franz Ferdinand have also come out for the group on tour swings through Moscow. Yesterday, Yoko Ono added her support, writing “Mr Putin, you are a wise man and don’t need to fight with musicians and their friends,” the Irish Times reported.

Politicians from one of Russia’s closest European allies are also pressing the women’s case.

A cross-party group of 121 members of the German Bundestag has written to Russia’s ambassador in Berlin, criticizing the band’s five-month detention and the prospect of years-long jail terms as “draconian”, “disproportionate” and in contradiction to freedom of expression.

“In a secular and pluralistic state peaceful art events, even if they may be perceived as provocative should not lead to charges of committing serious crimes and long prison terms,” stated the letter, published by Spiegel magazine.

Shortly after the trial wrapped up yesterday, Mark Feygin, one of the group’s lawyers,, announced a “world rally” to free Pussy Riot on August 17th, timed to start one hour ahead of Judge Syrova’s verdict.