COMMENT: The fate of Pussy Riot and the future of Russian dissent: finding the hero in every(wo)man

How will the Russian government go about jailing an idea? It’s probably the most pertinent question as the trial against the shredding all-female punk band-come-protest-movement Pussy Riot enters its second week, and its outcome is bound to reveal the shape dissent – and the Russian government’s response to it – will take for the next 6 to 12 years.

Published on August 6, 2012 by Charles Digges 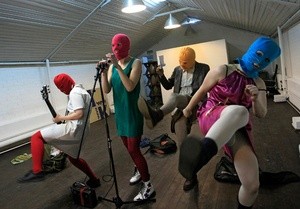 But they are just the tip of an iceberg of opposition that President Vladimir Putin is not likely to melt anytime soon.

The Duma, Russia’s parliament, is working to strip Gennady Gudkov of the opposition party A Just Russia of his immunity from prosecution in hopes of jailing him for his political activities. Anti-corruption blogger Sergei Navalny is facing charges of timber theft in a trumped up case brought by the prosecutors’ office.

And a number of protestors arrested during marches against Putin’s ascent to power remain in custody with no trial date in sight. How much opposition sentiment can bars hold?

With an international groundswell of criticism coming from unlikely allegiances among hard rockers and other musicians, Hollywood entertainers, international human rights organizations and politicians alike, Pussy Riot’s trial verdict is already almost a footnote – the band members themselves already the conflicted personification of the anti-Putin movement.

The truth of it is hard for the Kremlin to swallow: the three women of Pussy Riot – an explosive, obnoxious cross between a band and an anonymous Russian dissidents’ movement ­– have already hurled a rotten tomato at Putin, and it stuck.

What’s more, it was hurled not from on high, but from a seemingly unwashed peanut gallery occupying roughly the same quarters in Putin’s mind as those who have been demonstrating against him since the rigged parliamentary vote in December.

The women of the band, Nadezhda Tolokonnikova, 22, Marya Alekhina, 24, and Yekaterina Samutsevich, 29, who are three members of the five member collective, have been in jail since February, when they were arrested after storming the pulpit of the Christ the Savior Cathedral in Moscow and playing a minute long grinding hymn called “Mother Mary, drive Putin away.”

They were charged with for “hooliganism motivated by religious hatred.” If convicted they face seven years in prison. They have denied the charges and been declared Prisoners of Conscience by Amnesty International.

Aside from representing one of the first times in history that a searing, cacophonous performance has rocked the walls of both church and state simultaneously, the three women and their other numerous balaclava-wearing compatriots have exploded several key tactics in Putin’s strategy to dismantle the underpinnings of civil society.

Putin has been gloving up to fight a battle against his  opposition in a political ring, forcing foreign funded NGOs to register as “foreign agents,” reinstating the Soviet era jail sentence for “defamation” to intimidate the press, and levying onerous fines against demonstrators. And Pussy Riot’s very prosecution has proved that both the Kremlin and the Church can use one another as very potent weapons.

Now a bunch of mask-wearing guitar wielding girls have tripped Putin up with their chords.

Stripped of their anonymity and sitting the defendants’ cage in the ongoing farce trial in Moscow, they are the closest thing to personifying the opposition against Putin that has surged since he blithely announced he and former President Dmitry Medvedev would be swapping places last November.

They are young, educated, well spoken and polite. They are passionate about the cause of good sense trumping bad politics. They are mothers and wives. They are ­– by all indications in interviews they have given reporters in undisclosed locations where Pussy Riot meets in swelling numbers – girls you would be happy to take home to meet mom.

They are, in other words, something Putin and his allies in the Russian Orthodox Church had not expected: choir girls in Sid Vicious drag.

This puts Putin in an awkward position. Either his government convicts the band and martyrs it even further, or it backs down and concedes that prosecuting the masked trio whose musical protest mushroomed into an indictment of the whole anti-democracy he has created was a mistake.

Putin himself seems to be reconsidering things a bit. During a visit to the Olympics in London last week, he told reporters Friday: “There is nothing good in what they did [but] I don’t think they should be judged too severely.”

That could be a clear message to the judge sitting on the case to wrap things up, convict them and sentence them to time served. But Putin had a subtle warning shot to fire before he ended his remarks, saying that he hopes the Pussy Riot girls “will draw some conclusions for themselves.”

Read: We’ll let you get away with this naughtiness once, but do it again, and we’ll replace your guitars and drum sticks with sledge hammers to break rocks in a Siberian labor camp.

Whether the apparent nod for leniency for international consumption will translate in to freedom for Pussy Riot at home, however, is still an open debate, and certainly has not had any perceivable bearing on court proceedings. The problem? A climb-down on the Kremlin’s vehement stand on the band’s prosecution touches its most sensitive nerve – being seen as bowing to outside pressure.

The new NGO law and defamation statutes have yet to be tested in current circumstances and it remains unclear if several large foreign funded international human rights organizations – among them Bellona ­– will be persecuted if they are seen as running afoul of the law.

Yet even withering criticism from foreign governments, pledges from the US State Department to keep supporting Russian civil society, and looming threats of international travel restrictions and foreign asset freezes for supporters of the NGO law did not prevent its lightning fast passage last month.

Through the course of the day, however, the presiding judge dismantled the defense by barring 14 of its 17 witnesses from testifying, RIA Novosit reported.

Pussy Riot co-counsel Nikolai Polozov posted on his Twitter account that, “Putin lied to everyone again” as the humiliating court day wrapped up.

The increasingly vocal support from Western acts touring Moscow like Sting, The Red Hot Chili Peppers, Faith No More, movie stars like Danny Devito, and hosts of other big name Western bands who have publicly come out in favor of Russia’s version of the Riot Grrls may actually play to their detriment. Indeed, iconoclastic stadium filling Russian bands like Mumi Troll have refused to sport Pussy Riot gear in solidarity in an understanding that the effectiveness of protest stops at the Russian border.

This seeming cold shoulder from their domestic compatriots, however, is something the Pussy Riot women would likely comprehend all to well ­– not least because they seem to have hit on precisely the only kind of protest that may work: anonymous insurgence.

The band’s “method of protest hinges on anonymity. They have created a method of protest that is full of possibility and can be used globally, across international borders,” Tobi Vail, the drummer for Bikini Kill – which inspired the Riot Grrl movement and is arguably the most important feminist rock group of all time – told the indie culture magazine Dazed & Confused on August 2.

“Putin can jail individual members of the collective, but how can he stop the potential for new members to join or keep the movement from spreading beyond Russia?” she said.

As interviews with Pussy Riot and their supporters in the Guardian have shown, for every one that gets arrested and goes to prison, five more are willing to don the signature neon colored balaclavas and take their place.

Indeed, consider what Vail recognized. Pussy Riot performed anonymously at the Moscow church, its members’ faces covered in colorful balaclavas. They can be anyone and that might be the inspiration for the next Pussy Riot, or the next generation of protestors against the ever-tightening fist of Putin’s regime.

And if there is hope that the opposition will survive, it has to be a movement of the everyman – or more to the point, the everywoman. Liberal party politics in Russia are inherently flawed by dominant personalities and their inability to reach compromise and create a critical mass.

Perhaps now more than ever it is up to the everyday Russian citizen to find the hero in him or herself.