ANALYSIS: Embraced abroad and reviled at home – how Pussy Riot has both shaken and exposed the faith

In the four days since the members of Pussy Riot were convicted of “hooliganism motivated by religious hatred” and sentenced two years in a penal colony by a Moscow court, signs of controversy over the band’s fate show little signs of abating – specifically in Russia, where the verdict matters the most.

Despite howls of protest from western governments, media and human rights groups, Moscow police have announced an all points bulletin for other members of Pussy Riot.

Those that stood trial and were convicted for what amounts to medieval charges of blasphemy were simply three of the five members of the punk collective. The state evidently intends to find the other two and sentence them on the same charges of “demonic dancing” in a holy place, as Judge Marina Syrova’s verdict read – a law, for the record, that does not exist.

In other words, the show is hardly over.

Within Russia however, aside from the usual opposition figures that have decried the verdict, the response from ordinary citizens has been at best silence, and at worst a sense of religious entitlement ­– emboldened by the state’s stenographed conviction – to harass apparent non-believers.

One indication that the verdict has hardly settled the argument between Pussy Riot, who staged a 40-second long guerilla rendition of their punk “hymn” begging the “Mother of God” to “chase Putin out” at Moscow’s Christ the Savoir cathedral last February, and those calling themselves the Orthodox faithful is an amateur video that went viral over the weekend on social networks.

In the 45-minute video, shot in a café on Saturday, and filmed by a man wearing a t-shirt bearing the lyrics of Pussy Riot’s song, the cameraman is harangued by a group of self-proclaimed Russian Orthodox youths, forcefully demanding that he take the sacrilegious t-shirt off. His friends shout back that it is a matter of free speech.

Police were summoned, and according to the poster of the video, the incident did not end until 1 a.m. local time at a local police station where both groups wrote complaints against each other.

‘Demonic dancing’ against the law

The sentence handed on Friday to the women of Pussy Riot was based on an interpretation of Russian legislation against inciting “religious hatred” ­­– something the defendants Nadezhda Tolokonnikova, 22, Maria Alyokhina, 24, and Yekaterina Samutsevich, 29 ardently deny was their purpose. 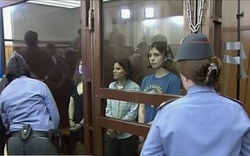 Their aim, they say, was strictly directed against President Vladimir Putin and the warm endorsement of his candidacy for president by Russia Orthodox Patriarch Kirrill as a “miracle from God” – which made the church a fair target for political action.

But the judge disregarded the political ramifications of the case – which would have implied digging into the thorny issue of free speech and what forms of it are acceptable – and zeroed in on the pain and anguish caused to members of the Orthodox faith. Most witnesses for Pussy Riot, who would have testified to their political motivations, were sticken by Judge Syrova from the witness list.

Because the church was nearly empty at the time of the band’s performance, Judge Syrova granted the prosecution the right to call witnesses who had only seen Pussy Riot’s flash-gig on YouTube or television – and delivered prepackaged testimony to their deeply offended sensibilities.

‘Other democracies do the same thing’

Some comments on Bellona’s coverage of the case on Bellona International’s Facebook page have offered criticism of our and other western outlets’ reporting, and flung barbs damning the US for similar practices of secret trials and arrests without charges suffered by inmates of Guantanamo Bay.

These are brittle arguments resting on the philosophy that two wrongs make a right. They also make the mistake of asserting that Russian and the US are equally developed democracies – or more to the point, assuming that Russia is a democracy at all.

Aside from the fact that “demonic dancing” has been protected by US federal law for the past 236 years, a more apt comparison these critics could make would be that at least the women of Pussy Riot were not stoned to death or hanged as they would have been in, say, Iran, Afghanistan or Pakistan.

Many western editorialists who have defended Pussy Riot nonetheless make the mistake of falling into the apologists’ trap. The recycled phraseology opines that the punishment for Pussy Riot’s actions is “disproportionate.”

While the sentiment is laudable, the suggestion that the band deserves a milder punishment ­– or any punishment at all – is misguided and ignores the context of the protest performance on two levels.

First, Russia has evidently come to such a cloistered and paranoid point that making a political statement requires some theater. In fact, the very methods of protest have to be rethought. If this has to take the form of five women dressed in colored masks, short skirts belting out ear-jarring music, then so be it. It certainly shook the government out of its blithe torpor.

Second, the Church of Christ the Savior could not have been a more apt lighting rod for political protest than Putin’s own desk.

The Church of Party Central

The original Church of Christ the Savior was destroyed by Stalin in 1931 as a show of Communisim’s victory over God.

Rebuilt in the 1990s in a frenetic effort spearheaded by former corruption-ridden Moscow Mayor Yury Luzhkov, the church was raised on the funding of late President Boris Yeltsin’s cohort of oligarchs as their own private party spot, as well as a place for Russia’s ruling elite to be seen hob-knobbing with the clergy – a trend that has endured.

The Fund of the Church of Christ the Savior (in Russian) advertises rental facilities and convention halls within the church for big bucks. Among those things the church can furnish for a private bash are refectories that include amps, a projector and large screen TV.

So much for the argument that Pussy Riot’s “demonic dancing” was an affront to the church itself. The band’s only misstep seems to be that they did not pay a booking fee to the church, which is not owned by the Russian Orthodox Church at all, but rather by a private corporation that rents it to the church.

As such, the Fund of Church of Christ the Savior owes Pussy Riot big for some of the best free advertising its ever received.

See no evil, hear no evil…

But these nuances would have been too much for the court – or the average Russian on the street – to consider, inasmuch as they were interested in considering them at all.

A recent poll by the Levada Center conducted before Friday’s verdict found that a full 55 percent of Russians consider that the trial against Pussy Riot would be conducted fairly and 5 percent reported their view of Russia’s justice system had improved as a result of the trial.

Where things get hazier is on what Russians polled by the Levada Center actually thought Pussy Riot was on trial for protesting. Only 30 percent got full marks on this, ticking “against the church and its role in politics”; 13 percent answered that they had protested against Putin, so half right.

But fully 36 percent reported that they had absolutely no idea what the trial was about at all.

In explaining its findings, the Levada Center said the results were largely based on the fact that most Russians get their information from one of Russia four fiercely state controlled television networks, so were in no real position to judge the merits of the case based on factual reporting.

This kind of enforced ignorance threatens to conflate opposition with sin. Indeed, huge projected turnouts protesting the verdict, which would have coincided with Russia’s national day of remembrance celebrating the defeat of the August 1991 hardline coup that aimed to restore hardline Communist rule, were vastly overestimated by the western press.

A mere 500 people showed up for sanctioned demonstrations in Moscow, according to Agence France Presse – a pittance when compared to the tens of thousands strong anti-Putin marches that dominated Moscow from December’s rigged parliamentary elections to May 6, the eve of Putin’s inauguration.

This piddling turnout could be attributed to two factors. The first is that Putin’s repressive new regime is gaining traction. Along with his new law requiring foreign NGOs that receive foreign funding to register with the Ministry of Justice as “foreign agents” or be fined or jailed; the reinstatement of libel as a criminal offence; new legislative rights for the state to shut down objectionable websites, there is also a new law imposing $9000 fines – or the average Russian annual salary – on obstreperous demonstrators.

A second factor, as pointed out by Gazata.ru political commentator Georgy Bovt is that not many Russians have noticed any change in scenery since the August 1991 coup attempt, which led to the Soviet Union’s collapse. According to figures from the Levada Center cited by Bovt, fewer and fewer Russians year by year actually consider that democracy triumphed.

A resounding 56 percent of those polled said that the coup’s defeat was nothing more than a change of power between one equally undesirable group and another  – Yeltsin, touted as the great democratic hope, was just as good or bad for the future of the country as Dmitry Yazov and his drunken cohort that held Gorbachev under house arrest for three days before throwing in the towel.

Church and State; opposition and sin

In fact, the allegiance between church and state in Russia is testament to the notion that one boss would have served as well as the other.

And there is nothing new about this allegiance:  Through the 70 years of Communist repression, the underground Orthodox clergy worked hand in glove as informants to the KGB to root out the scourge of anti-Kremlin sentiment.

If anything has changed it is that the allegiance is now out in the open, and if the women from Pussy Riot are guilty of anything, it is of showing that in its true light – and by relatively little effort of their own. Sure, they donned their colored balaclavas and short skirts, they danced in that portion of a corporate church reserved for only the male priesthood. But the mechanics of the state and the verdict that relied so heavily on church doctrine that it could have been penned by Patriarch Kirill himself revealed the true nature of the connection.

This is an effective weapon in a country where 60 percent of the population identifies itself as Orthodox faithful. Should any of this group be considering taking to the street to show their dissatisfaction, the fact that political opposition is now equated with sin may stop them.