COMMENT: How to divide Russia’s public sector from its voice and other benefits of the United Russia NGO bill

MOSCOW ¬– For the past few days since the United Russia faction introduced a bill requiring NGOs based in Russia that accept foreign funding to declare themselves as “foreign agents” a number of my colleagues have told the world they are not afraid to label themselves as such, nor are they afraid of further repression.

Published on July 4, 2012 by Vladimir Slivyak, translated by Charles Digges 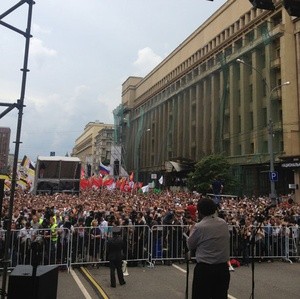 With all due respect, this law is not targeted at large powerful groups like Transparency International, AGORA, and GOLOS that conduct socially useful activity. A few will get roughed up in the process, of course, but this will hardly curtail work on serious problems.

If the government wanted to shut anyone down, they would have done it already. As we all know, ample instruments for doing that are included in existing legislation on NGOs.

The law is therefore needed in order to isolate NGOs from the public, to prevent a spreading base of support among ordinary people. To those who do not work directly with the Russia public (and that includes a huge number of powerful NGOs), this bill is for the birds. The Ministry of Justicse – with which “foreign agents” will have to register – knows very well who is getting money from where, who has been audited earlier and so on.

The specifics of the work of hardly a majority of organizations is tied to campaigns requiring wide public participation. That, for instance, is politics in its true meaning, as well as campaigns of an environmental or social character.

The law is not so much against existing NGOs as it is against the appearance of new hotbeds of opposition, against the appearance of new resources for the survival and proliferation of these new upstarts. And if they begin to pop up, the proposed law will make rough going for cooperation between new comers, who have few resources, and more experienced NGOs who frequently do.

Like the new law imposing heavy fines on protestors, this law is an attempt to play a preemptive strike. An attempt to strip away the possibility of expanding the base of public support for the survival of movements that speak out in favor of societal change. It’s an attempt to scare off new participants in this movement. Trying to intimidate older, more established movements is senseless.  We’ve seen it all before.

This comment was written by Vladimir Slivyak, co-chair of Russia’s Ecodefence, and originally appeared on Ekho Moskvy (Echo of Russia’s) website. It is republished here in English with his permission.