ST. PETERSBURG – The Russian Parliament, or Duma, was host to a round table discussion on tightening the bolts on activities for the country’s embattled non-governmental organizations, which have over the past several years been subjected to more and more onerous scrutiny from and pressure by the government.

Published on February 8, 2012 by Bellona, translated by Charles Digges 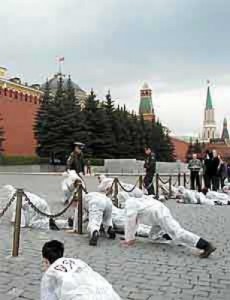 The amendments are at the moment under preparation.  Alexander Ostrovsky, the head of the Duma committee and a member of the ironically named Liberal Democratic Party of Russia (LDPR), which is known for espousing authoritarian views, said that the functioning of NGOs in Russia receiving foreign funding “has underscored an unequivocal understanding of the necessity of more exact, detailed legal regulation of the processes of creating, financing and functioning’” of such organizations.

Andrei Isayev of the United Russia party of power suggested the formation of  “defined filters” for auditing NGOs.

“If a non-commercial organization is founded and managed by a citizen of the United States, this must constantly be emphasized” he said  referring to the head of the Moscow Helsinki Group Lyudmila Alekseyeva, who holds a US passport.

Another member of United Russia, Yury Shuvalov, noted “certain understatements” in the activities of non-commercial organizations, and said it must always be known where their funding is coming from and who is sustaining them.

“Certain understatments” is pure speculation on Shuvalov’s behalf. All NGOs including those that receive foreign funding annually report on their financing and activities to Russia’s Ministry of Justice. The accountings are transparent and, as a rule, are posted on the web sites of NGOs and can be requested by the Justice Ministry.

In the United States, so-called “agents working in the interests of foreigners must account to the government for every penny they spend,” said theLDPR’s Ostrovsky. He suggested fundamentally differing rights and opportunities for non-commercial organizations receiving exclusively domestic sources of financing, and for those receive money from foreign sources.

According to Ostrovsky, Russian legislation has become “far too liberalized” for all types of NGOs to live by the same rules.

His reference to NGO legislation in the United States is furthermore patently untrue. Bellona itself has a registered office in Washington DC, which is financed nearly 100 percent by foreign sources. It does not have to face any special demands in its accounting to the US government that similar domestic ones do. Current legislation in Russia, however stipulates that organizations receiving foreign financing account for “every penny spent.”

Specifically local non-commmerical organizations are most likely given the green light, and the activities of those who for whatever reason fall under suspicion must go through unrelenting checks. Unannounced audits of NGOs is, in views Ostrovsky expressed, a key method of bringing “foreign agents” to heel.

Last year, the Justice Ministry attempted to suggest the formulations “suspicion of extremist activity” and “tied to election campaigns and technologies” as grounds for unannounced audits.

The clamp-down on legislation for non-governmental organizations began in 2005 and 2006 because of a number reports by state run media whose main thrust was that foreign spies and sponsors of NGOs were, in fact, western diplomats. At that time, the influential business daily Kommersant quoted then-president Vladimir Putin on the impermissibility of “financing illegal political activities” via foreign funding.

The vice surrounding rules on the registration of NGOs was tightened. Over time the situation eased somewhat: President Dmitry Medvedev introduced into the Russian law “On non-commercial organizations” certain amendments, reducing the frequency of audits an organization must undergo to once every three years.

The ongoing and massive marches against the government that started with the rigged Duma vote in December have enthusiastically rekindled in the upper echelons discussions of NGO financing and opposition forces. When government opposition movements met with incoming American Ambassador Michael McFaul, it fanned the flames of scandal.

At the Duma roundtable, which took place on February 2, Justic Minister Alexander Konovalov presented Medvedev with a complete auditing process for inclusion in Russia’s Civil Code, in which were also included the amendments to the NGO legislation. Konovalov characterized the document as a “well-balanced, measured and ready for introduction to parliament.”

Originally the draft of the State Committee’s bill was introduced to the presidential council for codification. The bill was a lightning rod for boisterous argument and criticism. Many of the issues were raised by the Ministry of the Economy and the commission charged with creating the so-called International Financial Center. In order to smooth over the contradictions, the Justice Ministry convened a working group into which they all the same did not think to invite any non-commercial organizations.

Incidentally, as noted Darya Miloslavskaya, director of the Russian branch of the Alliance of the International Center for the Not-for-Profit Law, the argument that took place was essentially about commercial organizations.

Miloslavskaya, who makes frequent media appearances on the subject of changed to NGO legislation and the amendments under consideration by the State Committee, said that as of January 19, the bill still contains distinctions between corporate and unitary NGOs, and that the number of legal forms had been reduced to six or seven where previously they has numbered 27.

The charter capital for organizations where entrepreneurial– for instance, charitable – activities are permitted remains at 10,000 roubles (€253), though there were suggestions to raise it to 500,000 roubles.

It also follows from the presently suggested rules that the possibilities for unannounced audits of NGOs will be substantially augmented, then as now on the basis of the most serious premise – audits based on whether and NGO is involved with political parties and elections.

So long as the amendments remain unfinished, the bases for audits remain few. Aside from that, non-commercial organizations managed exclusively by Russia citizens and receiving no funding from abroad that exceeds 3 million roubles, are not obliged to make a detailed accounting of their activities. Justice Ministry head of NGO issues, Vladimir Titov, has suggested returning to this question “on a legislative level during the current year.”

Medvedev has called the Civil Code the “economic constitution of the country” and in order to create favorable investment conditions has called the creation “of its new dimension.”

Miloslavskaya,in an interview with Kommersant, however expressed hope that no repetition of the turbulence of 2005 and 2006 surrounding the NGO legislation will occur.