Zarema Sadulayeva and her husband, Alik Dzhibrailov, workers with the Let’s Save the Generations rights group in Chechnya were found dead Tuesday in the Chernorechye suburb of the Republic’s capital, Grozny, Monday a day after they had been kidnapped. The couple’s bodies were found riddled with bullets in the trunk of their car.

The deaths were the latest in a string of killings in the region, where Moscow twice fought wars against separatists following the collapse of the Soviet Union in 1991. But the recent spate of murders and kidnappings have, until now, centred on human rights workers and journalists in the political sphere. In a lurid twist, Sadulayeva worked for Let’s Save the Generations worked with young victims of violence.

They also underscore the urgency of a letter sent last week to Russia President Dmitry Medvedev by some of Russia’s leading human rights activists, asking him to ease legal tensions for non-governmental organisations (NGOs) and combat threats against their workers.

The grizzly discovery of Sadulayev and Dzhibrailov’s murders yesterday comes less than a month after the killing of Nataliya Estemirova, a vociferous campaigner for Chechen rights with ties to Memorial and Human Rights Watch. She was kidnapped in Grozny in broad daylight, screaming for help, and found shot in the chest and head – a signature hit job shot – later that evening in the neighbouring republic of Ingushetia on July 15th.

“If the president of Chechnya bears the responsibility for what is going on in the republic, then he bears responsibility for the kidnappings and murders as well,” Nikolai Rybakov, executive director of the Environmental Right Centre (ERC)  Bellona, Bellona’s St. Peterburg office, said in reference to Chechen strongman Ramzan Kadyrov.

“And the fact that he is not dealing with his responsibilities to guarantee people’s safety means he should be forced to step down or step down himself,” said Rybakov.

The Sadulayev-Dzhibrailov couple had been abducted the previous day. An armed group entered the offices of Let’s Save the Generations around 2 p.m. on Monday, and announced that they represented the secret services, Alexander Cherkasov, head of Memorial, one of Russia’s most prominent rights groups that has tracked the humanitarian crimes of the Stalin era, and has over the past years turned its focus on kidnappings and murders in Chechnya, told Bellona Web.

A short time later, according to Cherkasov’s account, the same men returned for Dzhibrailov’s mobile telephone and car, both of which were still at the office.

"Both bodies were found this morning in the Chernorechye suburb of Grozny," Cherkasov said.

Lack of clear political motive
Sadulayeva headed up the Let’s Save the Generations NGO, the main focus of which is helping young people who have been victimized by the ongoing violence Chechnya, including children who lost limbs during the region’s separatist wars, Cherkasov said.

"There was no political element (to the work of Sadulayeva and Dzhibrailov)," said Lyudmila Alexeyeva of the Moscow Helsinki rights group.

"They just helped disabled children and children from poor families (…) It just shows that anyone whose position allows them a gun can kill whoever they like."

Prosecutors’ in Chechnya have opened a criminal investigation into the murders of Sadulayeva and Dzhibrailov, a spokesman for the Chechen prosecutors office told Bellona Web, but said that the motive behind the murders were unclear.

Rise of extra-judicial killings in region
Many human rights workers believe that the regime of 32-year-old Kremlin-backed Kadyrov – who inherited the presidential mantle from his father – is responsible for numerous extrajudicial killings in the area, primarily through the use of secret police death squads.

Last month’s slaying of Estemirova– which brought with it an outpouring of international condemnation – elicited Memorial leader Oleg Orlov to accuse Kadyrov himself of being behind the murder, which are dangerous charges to level against a man who, according to journalist Anna Politkovskaya, runs the death squads.

Medvedev promised a thorough investigation of Estemirova’s murder, but dismissed suggestions Kadyrov was involved – though so far has promised nothing in the Sadluayeva case.

Kadyrov himself has also denied involvement, in Estemirova’ murder, but his remarks in an interview last weekend with Radio Free Europe that Estemirova "never had any honour or sense of shame" and "would say stupid things" caused further controversy.

His remarks were reminiscent of then President Vladimir Putin’s upon being asked in Germany what he thought Politkovskaya’s murder, commented that Potikovskaya’s “role in Russia’s political life is insignificant.”

Kadyrov, installed as a local strongman by the Kremlin to calm unrest in Chechnya, has found himself repeatedly accused of ordering extra-judicial killings after a growing number of his critics and political opponents have been murdered. 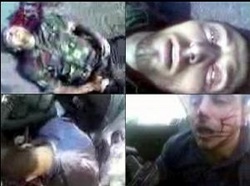 Politkovskaya, who was reporting on the alleged death squads for the stridently independent Russian weekly Novaya Gazeta, was found shot dead in the elevator of her apartment in building in Moscow – the night before her story was to go to press.

Chechen exiles have been gunned down abroad while others have been shot on the streets of Moscow – most prominently 34-year-old human rights lawyer Sergei Markelov in January, who was killed after giving a press conference against the early release of a Russian Army tank commander who had strangled a young Chechen woman.

Killed by his side in the brazen daylight hit only blocks from the Kremlin was Nataliya Baburova, 25, a freelancer for Novaya Gazeta.

None of these crimes have yet been solved, though a new jury trial against several men believed to have had a hand in Politkoskaya’s murder has been reconvened after the suspects’ initial acquittal.

President Medvedev – who has recently cozied himself up to Kremlin opposition groups for reasons yet unclear – condemned the original not guilty verdict against the men. The prosecution, which was told it had done a sloppy job in preparing its murder case, was given a second chance, as is allowed under Russian law, to recompile their case.

The reporters at ERC Bellona contributed to this report.