In yet another severe blow to civil society and non-governmental organisations in Russia, Prime Minister Vladimir Putin yesterday signed a decree that slashes the number of international organizations allowed to issue tax-free grants for work inside the country from 101 to just 12. 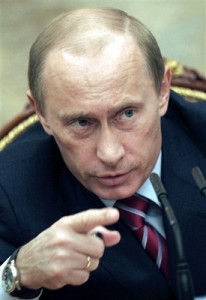 The sharp reduction has revived fears within the NGO community that the Russian government is aiming to muzzle foreign organizations altogether.

The new decree by Putin – who ushered in restrictive new ammendments to Russia’s law on non-governmental organisations – leaves little doubt that Putin, and not his hand-picked successor to the presidency, Dmitry Medvedev, is still in charge.

An overwhelming preponderance of the organizations that will be forbidden to finance work tax free in Russia from January 1st, 2009 on, according to Putin’s decree, are environmental, humanitarian, and rights organizations such and the World Wildlife Fund (WWF) and the international Red Cross.

By the decree, those organizations that did not make it into Putin’s list of 12 tax exempt entities will be forced to pay a 24 percent tax on all grant money they send into Russia.

"This move was dictated by political considerations," said Pyotr Gorbunenko, executive director of environmental watchdog WWF and one of the organizations affected by the change, quoted by Interfax news agency.

"The spy mania of the past two years, the changes in the law on non- governmental groups, all these things are linked," said Gorbunenko, referring to frequent accusations by the Kremlin against foreign charities.

Many other groups contacted by Bellona Web have yet to formulate a comment on Puitn’s new decree, and the spokeman of one group, who asked that his name and affiliation be kept private, said, “most of us here are afraid our comments, especially to foreign news services, will just make things worse and get us booted altogether.”

“Obviously this is a move to sweep us all out the door, but the notion that Putin has narrowed the list to government organisations could possibly give the decree a kind of legitimacy at first glance,” said the source.

Other directors of international organisations were caught unawares late Wednesday and early Thursday and wished to refrain from comment until they hade read the decree themselves.

Putin’s crushing new move against NGOs is likely to have little immediate impact on Bellona’s Russian operations, as its St. Petersburg and Murmansk offices operate on grants and are registered as Russian civil society organisations, said Nina Popravko, a legal advisor with the Environmental Rights Centre (ERC) Bellona. Bellona has another office in Russia – Bellona Murmansk.

“Despite the fact that control on the activities of NGOs, both foreign and domestic, is tightening, and the government is trying to assert financial pressure on them, Bellona has not yet been affected only because, in accord with current tax laws…(Bellona) doesn’t receive grants, but donations, which are not taxable,” Popravko said.

“But many NGOs (…) survive on grants, and counted on them being tax free,” she said, adding that “the shortening of the list of grant giving organisations will close many NGOs (…) They simply won’t be able to deal with the tax burden and will close down.”

The 12 organizations that made the tax-exempt list include the Commission of the European Communities, the Council of the Baltic Sea States, the Nordic Council of Ministers, the International Atomic Energy Agency, the Black Sea Economic Cooperation, the European Fund for the Support of Co-production and Distribution of Cinematographic and Audiovisual Works, the Joint Institute for Nuclear Research, and several United Nations programmes.

The government approved the previous list of 101 charities and civil society organisations in March 2007.

Putin and other government officials have accused foreign NGOs of meddling in domestic politics and have drastically tightened registration and financial procedures for the groups in recent years.

The new NGO law, passed in January 2006, made daily life very difficult for foreign and domestic NGOs alike by requiring onerous financial and ideological reporting, and arbitrary policies for the actual format in which documents were to be presented for re-registration with the government.

The new requirements led in 2006 to the suspension of work of several foreign NGOs in Russia, such as Human Rights Watch and Amnesty international, while government officials rejected documents bound with improper string or because organisation’s founding members were not able to write mission statements for their organizations because they had long passed away.

Russian NGOs for their part, are subject year round to surprise audits that take weeks, and result in arbitrary decisions. ERC Bellona was found by registration officials during an audit in 2007 to be liable to pay advertising taxes for listing the British and Dutch Consulates as sponsors for one of its programmes.

Bellona objected, as did the British and Dutch consulates, to the findings in writing, but never received a return response from authorities.