KIEV – The European Bank of Reconstruction and Development has promised to force Russian authorities to resuscitate environmental legislation and to establish independent environmental oversight structures — as well as throwing its weight behind defending Russian NGOs.

Published on May 28, 2008 by Vera Ponomareva, translated by Charles Digges 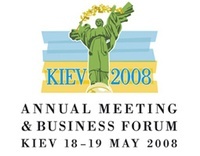 This tall and welcome order was the subject of an EBRD conference with Russian NGOs held last week in Kiev, Ukraine, where the bank is also putting several million euro toward improvements in radiological safety at Chernobyl.

“(Russia’s) law on NGOs and other recent changes in legislation put civil society organisations in a very severe position and can result in limiting the activity of existing NGOs,” said Alan Russo, the EBRD’s political advisor for Russia at the Bank’s Kiev meeting. “I will be paying attention in future also to the impact it has on limiting the number of new NGOs that might have registered.”

The bank’s consultation with NGOs ran parallel to the annual EBRD board of directors meeting on May 18th and 19th. The EBRD has been holding similar meetings for the last 10 years in order to discuss with the public the social and ecological aspects of the bank’s work.

“Ten years ago, the board of directors came to Kiev as well. At that time the bank could not find anywhere to meet with NGOs and we had ourselves to rent a small hall directly across the street from where the official event was taking place,” said Petr Hlobil of the international Bankwatch organization.

Having voiced his concern over the conditions Russian NGOs are facing, Russo requested Russian human rights activists to tell of their own difficulties since the new Russian NGO law went into effect.

“The law became a springboard for a total examination of civil society organisations that frequently paralyses their activities,” said Mara Polyakova of the Independent Expert Rights Council.

“They conducted duplicate audits — the prosecutor, the registration service and the tax inspectorate. For each we had to prepare materials reaching the thousands of pages. Many organisations are now serving the registration authorities. All of this in circumstances of being dependent on the courts creates a negative and anxious mood for many human rights organisations,” she said.

Polyakova also noted that “many organisations are exercising self-censorship because law enforcement bodies are arrayed in such a fashion as to charge criminal actions against people who are critical of the government with extremism or slander when their activities involve neither one nor the other.”

For example, criminal charges were brought against a well-known human rights activist, Lev Pomomaryov. The basis for the slander charges against him were the result of an interview he gave the Regnum Russian news agency in which he accused Federal Penitentiary Service chief, Yury Kalinin, “of being the author of a system which confirms more and more: this is a sadistic system.”

According to an EBRD mandate, the bank can only work in those countries that support principles of a multi-party democracy and pluralism. The bank’s political advisors follow whether the countries in which they work adhere to these criteria. Failure to observe these principles has already forced the bank to give up its work in countries like Turkmenistan, Uzbekistan and Belarus.

“We have a feeling that the collapse of environmental impact evaluations escalated the level of corruption in the process of issuing permissions to realise numerous projects.”

The Institute of Environmental Impact Studies on Planned Projects ceased its activity in Russia in 2007 after an amendment to Russia’s law governing urban development took effect. Earlier in May 2005, by order of former President Vladimir Putin, the independent State Committee on Environmental Preservation was abolished. The authority of this structure was transferred to the Ministry of Natural Resources — which serves exactly the opposite function of preserving the environment.

“One of our fundamental demands is reestablishing an agency for environmental protection and we hoped, having listened to the speeches of new Russian President Dmitry Medvedev, that such an organ would be restored, but May 12th saw the publication of the government’s new structure and, unfortunately, we did not get an independent agency,” said Knizhnikov.

Corporative Director for Environment and Sustainability with the EBRD, Dr. Alistair Clark agreed with environmentalists. 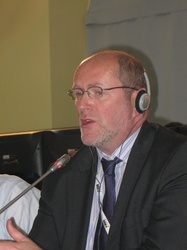 “At the time that the State Commetee for Environment merged into the Ministry of Natural Resourses we commented on that in the Russian strategy saying how concerned we were,” said Clark.

“We will continue to press for the appropriate administrative structures which we would concider to be an independent ministry or federal inspection service, how it would be organised in any other country. We will continue to push for that in our discussions with Russia."

Energy politics
For the past three years, the EBRD has earmarked €1.7 million to boost energy efficiency, and in specific, for energy conservation in industry, homes, the production of energy and on the production of renewable energy.

Among the projects funded in Russia by the EBRD over the past few years include the modernization of the Severstal plant, and changing the heating networks in Moscow, Kaliningrad and Taganrog.

According Josué Tanaki, corporative director for energy efficiency and climate change issues at the EBRD, the main impediment to investment in Russian renewable energy is a lack of fundamental legislation.

Environmental groups have turned to the EBRD with requests for cooperation in helping change Russia’s energy strategy. The current strategy emphasises coal and nuclear power generation, while an infinitesimal portion of “green” energy is to make up one percent of the balance by 2010.

The general position of NGOs dealing with social and environmental problems of production and distribution of energy, signed by 30 Russian organisations and represented by the bank, includes measures toward energy conservation, the development of renewables, abstaining from building large hydro-electric plants, information transparency for the public on projects, and conducting environmental impact studies.

Environmentalists accused the EBRD of giving moral support to Russia’s outmoded energy strategy. They warned the bank that, should the EBRD take part in supporting giant energy projects, the bank should be prepared to take part of the blame for the direction in which Russia’s energy sector is developing.

The Boguchansk hydro-electric plant — without EBRD funding
One of these energy giants — the Boguchansk Hydro-Electric Plant in Angar — is mentioned in the EBRD investment strategy for Russia as a potential target for financing. Environmentalists have already appealed to the bank for two years with the call to refuse financing the plant.

The project envisions flooding more than 1,000 hectares of land — submerging forests, archeological monuments, animal burial sites, and part of the city of Ust-Ilimsk. The construction, which began in the 1980s, was frozen until recently, and is now progressing without a governmental environmental impact study or any form of consultation with the public that will be impacted by the project.

“If the EBRD doesn’t plant to finance the Boguchansk Hydro-Electric Plant, it must make a public announcement and exclude the project from the EBRD strategy for Russia,” said Igor Ogorodnikov from Baikal Environmental Wave. According to him, such a move would help avoid ambiguity and put a gold star on the bank’s policy.

“Including the project in the strategy for Russia was our mistake,” said Corporative Director for the Environment and Sustainability Clark. He added that, at the moment, the EBRD was not reviewing financing for the Boguchansk Hydro-Electric Plant. But he would not rule out that the bank could return to the project in the future.

Lukoil’s environmental and social ‘responsibility’
In 2007, the EBRD earmarked $300 million for nature preservation measures for Lukoil — a company, which, according to environmentalists, regularly runs afoul of ecological legislation. Tamara Makarova from the Committee to Save Pechora listed just a few of Lukoil’s infractions for the assembled meeting, which cast a dim light on Lukoil’s reputation as environmentally responsible.

“We observe open lobbying for the interests of oil companies from (Lukoil) bureaucrats,” she said.

Clark promised to raise the question in negotiation with Lukoil’s upper management and inform environmentalists of the results. He added that the loan given by the bank was aimed at preventing, discovering and liquidating oil spills, and that Lukoil has no reason to hide its leaks and cover them with sand.

In December 2007, the drafting of the Strategic Master Plan for solving nuclear problems in Northwest Russia, which was begun in 2004, was completed. Sergei Kiriyenko, head of Rosatom, the Russian state nuclear corporation, approved it. The plan included dismantling decommissioned submarines and other Russian Navy nuclear vessels, as well as repairing and reconstructing radioactive waste storage sites.
“In 2007 we had successes in a temporary framework in completing projects,” said EBRD Nuclear Safety Department Director Vince Novak.

“We were able to complete a number of small projects, one of which I am especially satisfied with — an automated system for monitoring nuclear installations, ASKRO — 2 in the Murmansk Region. Another positive instance is that Rosatom asked the IAEA (the International Atomic Energy Agency) to conduct evaluations of the system, so that its functionality was confirmed by the IAEA. And this was the basis for us to suggest to donors that they finance a similar system in Arkangelsk, and the realization of that project will begin in a month.”

Novak added that next year the bank will begin work on dismantling the notorious and highly radioactive floating technical base and nuclear waste storage facility, the Lepse.

Nevertheless, according to Andrei Ponomarenko, Bellona-Murmansk’s coordinator for nuclear and radiation safety projects, Master Plan work is not being carried out with sufficient speed.

“The ‘light projects’ in which we include the cutting up of submarines have been completed,” said Ponomarenko. “The extremely burdensome situation at Andreyeva Bay, however, remains. There is still no working plan for unloading the spent nuclear fuel from its storage units. The fuel in the storage containers therefore continues to degrade, which is fraught with the eventuality of an emergency situation.”

In 1982, a leak from one of Andreyeva Bay’s storage pools for spent nuclear fuel from nuclear submarines developed. Radiation began to make its way to the Barents Sea. A decision was taken to urgently unload this fuel into three large dry storage units. The fuel was loaded into metal pipes, put into the containers, and the gaps between the pipes sealed with cement.

It was planned that such an arrangement would serve for three or four years. By now, it has been a quarter of a century. At present, 3059 cases of spent nuclear fuel — the equivalent of some 22,000 spent nuclear fuel assemblies — are stored at Andreyeva Bay. There is also an enormous amount of liquid and solid radioactive waste at the installation.

Bellona is also concerned with the financial side of the issue. According to Bellona data, about half the €2 billion cost of the Master Plan will have to go to Andreyeva Bay — and this is just according to preliminary evaluations. Neither the Russian budget nor the budgets of donor nations can provide this kind of money.