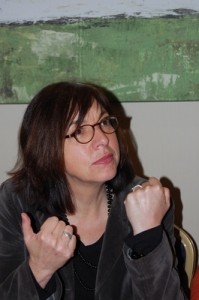 At a roundtable discussion Friday arranged by Bellona’s St. Petersburg, Brussels and Oslo offices that wound up the MEPs fact finding mission on Russia’s civil society situation, Mikhailov, a former member of the fiercely nationalistic and ironically named Liberal Democratic Party led by the antic bigot Vladimir Zhirinovsky, challenged European notions about the functions of a free society.

“You cannot transpose one idea of freedom from one country to another,” Mikhailov told Bellona Web, comparing the notion to that of differing national customs about where one should place one’s shoes.

“What is right in Africa may not be right in Russia,” he said. 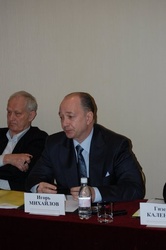 “I came to St. Petersburg because it seemed to me that in the course of adopting the new law on NGOs and in the process of re-registration of many NGO, it turned out that the work conditions for precisely those of groups of citizens who are working here in Northwest Russia and the Leningrad Oblast on environmental problems has gotten worse,” Harms said.

“On the hardships in work that NGO’s are experiencing, I have also heard from groups that work in the field of defending women’s rights, and other human rights watchdogs,” Harms told reporters.

“From our point of view, the condition of NGOs in St. Petersburg, as in all Russia, is close to catastrophic: It is completely clear that the authorities will take a course of liquidation of NGOs without connections to the authorities.”

In an apparent effort to strike a diplomatic note between NGO participants and the point of view of rights ombudsman Mikhailov, Kallenbach told Bellona Web that: “In some ways, what I hear from NGOs here in St. Petersburg about the difficulties they experience reminds me of the situation in the German Democratic Republic.”

Kallenbach lived in East Germany until its collapse.

“But NGOs can speak their minds freely now,” Kallenbach continued. “That would not have been possible during communism. And that gives me hope.”

Russian government bait and switch
According to the Russian NGO participants of the round table meeting with the MEPs, a dangerous situation has arisen for civil society organisations – the authorities are substituting independent NGOs by replacing them with organisations that imitate their structure.

Under the Putin administration and the increased muzzling of truly critical organisations, numerous government-funded “NGOs” have made an appearance with Kremlin funding. Advertising themselves as rights organisations, they turn out of be little more than government run cells promulgating the government line.

The participants in the meeting noted that in the majority of European countries, special legislation regulating the work of NGOs focus the attention on the tax status of these organisations rather than the content of their mandate. Such organisations serve to distract society at large from the profound crackdown on NGOs that are fighting for governmental transparency.

NGOs in democratic countries also exist for the purpose of giving the public levers of control over the activities of their governments. In Russia, authorities are attempting to affect the strictest control on NGOs instead of guaranteeing their own transparency and accountability before society.

(This report was compiled by members of ERC Bellona in St. Petersburg and Bellona-Europa in Brussels.)