Democracy in Russia – groaning under the weight of new restrictive laws governing non-profit organisations, rampant corruption, the Kremlin’s co-opting of the media, and the vertical power structure subjugating all levels of Russian governance to President Vladimir Putin – is dying.

Published on October 8, 2006 by Charles Digges 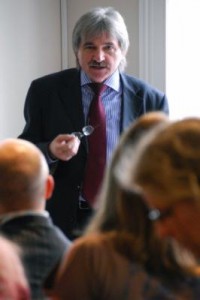 So said Bellona’s Alexander Nikitin and other experts at a Bellona-hosted seminar on Friday convened to discuss the problems of Russia’s newly adopted legislation on civil society and non-governmental organisations (NGOs).

The official paranoia that ushered in the tough new NGO laws was spearheaded by Ukraine’s “orange revolution” when thousands took to the steets of Kiev to protest an obviously rigged election in which Moscow backed incumbent Viktor Yanukovych defeated western thinking, pro-democracy Vitkor Yushchenko. The protests brought about a new election that Yushchenko, to Moscow’s chagrin, won.

Part of what it making the Russian government’s smothering of civil society possible, said Nikitin, who also runs Bellona’s St. Petersburg office, is President Vladimir Putin’s push to subjugate all forms of public interaction to his government, as well as rampant corruption within the agencies created to govern non-profit organisations.

“Corruption will be the death of Russia,” said Nikitin, who heads Bellona’s St. Petersburg office.

“It runs through all levels of society from janitors to government officials.”

This, plus the zeal of the Putin Administration’s goal to bring every form of government and public expression under its heel – introduced by Putin as “power vertical” – will smother what little remains of the drive toward Russian democracy.

“Everything has a price and you can even purchase a governorship, though I am not sure what the cost for that is these days,” Nikitin said. 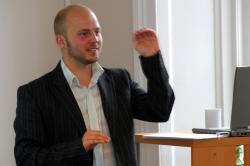 Meanwhile, business contribution to the NGO sector is taboo. The political conditions, said Nikitin, are simply impossible, as a donation may reveal a business’ political leanings. In fact, said Nikitin, one business that donated to Bellona St. Petersburg begged that its donation be listed as anonymous.

At present, Russian power is dependent on high oil prices, said Nikitin. But if those prices bottom out, it could lead to a revolution. Ukraine’s orange revolution passed without bloodshed, said Nikitin, but he was not optimistic that the same would be the case for Russia.

“They say Russia is stable, but it is not. Even France was considered stabile before its revolution” he said. “But how can Russia survive a third revolution?”