Published on December 10, 2005 by Ingvild Jenssen 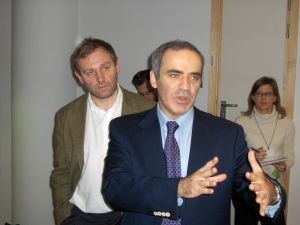 Kasparov in the European Parliament: Russia back to pre-Glasnost regime

Former Chairman and current member of the EP Joint Parliamentary Committee with the Russian State Duma, Staes also specifically mentioned that NGOs, such as The Bellona Foundation, could see their activities and indeed their mere existence in Russia, seriously threatened because of a bill on the floor of Russian Duma. Staes intends to table a parliamentary resolution urging European leaders and the European Commission (EC) to express their concerns to the Russian Government.

The Russian bill—introduced by Kremlin loyalist and majority party Unity—passed the first of four required readings with flying colours. The remaining readings are scheduled for later in December, when it is expected to again draw hefty support from Kremlin backed factions. Should it become law it will require all non-governmental organisations (NGOs) operating in Russian to register with the state, effectively quashing their independence.

Joining him was world chess champion turned political commentator Kasparov who spoke to the European press about electoral fraud and lack of political freedom during the latest round of Russian presidential and Moscow City Council elections, the Chechen and Northern Caucasus conflicts, and the newly proposed bill on reigning in NGO. Kasparov has earlier said that he will support any political party opposing Putin in the Duma and Putins possible third term in office.

Electoral fraud
According to Kasparov, neither the Russian general elections of 2004 nor the recent Moscow City Council elections were held according to democratic standards.

All we want is free and fair elections said Kasparov, who has been following the developments in Russian politics closely. He asserted that the foundation of Putins totalitarian regime partly lies in high oil prices and added that the conflict in Chechnya is in that sense advantageous for the government.

NGOs are concerned
At the press conference, Bellonas Brussels representatives Paal Frisvold and Claire Chevallier voiced their concerns over the controversial Russian NGO bill. Indeed, the Russian Lower House of parliament has given strong preliminary backing to a bill that will restrict the activities of NGOs.

If the bill passes into law, it will require several hundred thousand NGOs in Russia to re-register under a new and stricter regime making it difficult for them to receive foreign donations or hire foreign workers at their offices. Only citizens of the Russian federation or non-citizens with a permanent Russian residence permit will be allowed to represent these organisations.

The Russian authorities will also be given wide powers to make inspections of the NGOs under unclear pretexts. More than 1,000 NGOs have been urging Russia to reject the bill. Frisvold also urged the EP to play a more active role so that NGOs like Bellona can continue their important and comprehensive work in Russia.

EP follow-up
The EP will have a formal discussion about the situation in Russia during their December plenary in Strasbourg next week where a resolution condemning the legislative developments in the Russian Duma will be adopted. MEP Staes also specially urged the Belgian government to give the situation in Russia priority while chairing the Organisation for Security and Co-operation in Europe (OSCE) in 2006.