The European Court on Human Rights has examined the application filed by Aleksandr Nikitin against Russia, and declared it admissible. The Court is expected to rule on the merits of the case in late 2004. 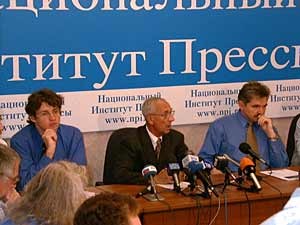 The Courts Second Section, consisting of seven judges from France, Hungary, Iceland, the Czech Republic, Ukraine, Georgia and Russia, gave the decision on November 13, 2003. They hold unanimously that Nikitins complaint raises serious issues of fact and law under the European Convention on Human Rights.

Particular attention
The Court has paid particular attention to the fact that the Russian Prosecutor General, after Nikitins acquittal was final in April 2000, made an attempt to re-open the case by filing an extraordinary appeal to the Supreme Court Presidium.

The Presidium rejected this appeal. Yet, the European judges refer to Nikitins submission to the Court and hold that the very possibility for the prosecution to challenge the enforceable acquittal may well be incompatible with his right to a fair trail under Article 6 (1) of the Convention.

The length of the criminal proceedings against Nikitin, which also was an issue, was on the other hand not considered to exceed the reasonable time limit set out in Article 6 (1).

Double jeopardy
The Court also considers that there is a distinct possibility that the extraordinary appeal violates Article 4 of Protocol no. 7 to the Convention, as this appeal made Nikitin liable to double jeopardy; to be tried again for an offence he was finally acquitted of.

Article 4 (2) allows re-opening of criminal cases where the accused has been acquitted, but only if there has been a fundamental defect in the previous proceedings. However, no such defects were found in Nikitin’s case.

The European Court has thus, declared his complaint under Article 6 (1) and Article 4 of Protocol No. 7 as admissible.

The full text of its decision is available on the European Court’s web-site. (Mark the field for admissibility decisions on the top of the page, and search for application no. 50178/99).

The end is closing in
The case parties have been invited to submit any additional evidence or written observations that they wish to put before the Court by January 19, 2004. Thus, the end of Nikitins European case is closing in. There is however, little reason to believe that the decision on the merits will see the light of day before the secound half of 2004.

As to the outcome of the case, it is too early to make any predictions. It is however a fact that more than 90 % of the applications that are filed to the European Court are rejected before the admissibility stage. It is also a fact that the Court rules in favour of the plaintiffs in a large majority of the cases in which it considers the merits.

The Russian government has lost all cases.

Nikitin case history
Aleksandr K. Nikitin, a former submarine officer and nuclear safety inspector turned environmentalist, started to co-operate with Bellona in 1994. He was arrested in February 1996 and charged with treason through espionage for his contributions to a Bellona report on the nuclear safety within the Russian Northern Fleet. After having spent 10 months in pre-trial detention in St. Petersburg he was released on the order of Mikhail Katushev, the then deputy Russian Prosecutor General, in December 1996.

The charges were however, not dropped. Nikitin first stood trial in October 1998, when the St. Petersburg City Court rejected the evidence against him. But rather than acquitting him, the Court sent the case back to the FSB for additional investigation. The Supreme Court confirmed this decision in February 1999, and the FSB filed new charges in July 1999.

The second trial started at the St. Petersburg City Court in November 1999, and ended on December 29 with a full acquittal. The prosecution appealed to the Supreme Court, but the acquittal was confirmed and reached legal force on April 17, 2000.

The Prosecution was, however, not willing to call it a day. On May 30, 2000 the Prosecutor General requested the governing body of the Russian Supreme Court, the Presidium, to re-open the case. The basis for the request was that Nikitin’s rights had been violated throughout the proceedings against him, and that these violations had to be repaired (sic). The Presidium rejected the request on September 13, 2000.