The Russian Supreme Court has ruled that the secret decree 055 of the Ministry of Defence must be declassified and brought in accordance with the Constitution and federal laws. – This is a major breakthrough, says Nikitin. 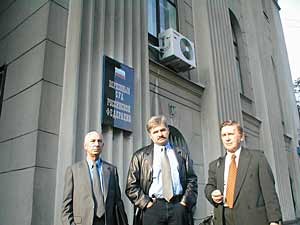 The ruling was pronounced by the Military Collegium of the Russian Supreme Court on September 12, after the Court had handled an application from Aleksandr Nikitin regarding the illegal use of decree 055 of the Ministry of Defence (MoD) as a normative act in criminal cases.


– The system must be terminated

Nikitin, who suffered an almost five year long prosecution for state treason based on the decree before he was acquitted by the Presidium of the Russian Supreme Court on September 13, 2000, explained the background for his application at a press conference on September 11.

– In Russia we have a system where each department makes its own top-secret lists over state secrets, which later can be used as basis for filing criminal charges. Although such prosecutions contradict our Constitution, they are still going on in Russia today, said Nikitin and referred to the cases against journalist Grigory Pasko, and academics Oleg Sutyagin, Vladimir Soyfer and Vladimir Schurov. – This remnant of the system that once imprisoned millions without trial must be terminated, he said.

Although Nikitin and his attorneys Yuri Schmidt and Michael Matinov were confident that the legal foundation for their application was more than solid, they were still astonished by the rapidity of the victory. At the press conference on September 11, Schmidt said that he expected the Court to use several days on the case before any ruling would be presented.

It took however, less than one day for the Court to make up its mind. First it rejected various formal arguments from the MoD-attorneys, who claimed that Nikitin could not file the suit, since his rights as a citizen had not been violated by the use of the decrees. This argument led one of the judges of the Court to burst out: – Mr. Nikitin was as a civilian prosecuted for having violated military decrees. How can you say that his rights were not violated?

The question was left unanswered.

The MoD-attorneys also claimed that the decree was not used as a normative act, an argument that even yielded a protest from the Russian procuracy’s representative at the lawsuit.


After having rejected these formal arguments, the Court went on to handle the merits of the case, and its ruling turned out to be a complete victory for Nikitin.


Will affect other cases

The short term significance of the victory may at the time of writing seem somewhat unclear, as the legal development in Russia is a slow mover.

The ruling is however of a general nature and will without doubt, affect other ongoing cases. At a recent press conference in Vladivistok, Ivan Pavlov, who defends Grigory Pasko whose espionage-charges are based on decree 055, did for instance comment Nikitin’s application the following way:

– If Nikitin wins, we will knock the ground from under the feet of our opponents.


Now Nikitin has won, and although the MoD most likely will appeal the decision to the Presidium of the Supreme Court, there is reason to believe that the decision will stand. – I consider this as a major breakthrough for the legal protection for Russian citizens, and as a long step forward for the Russian society, said Aleksandr Nikitin afterwards.


Bellona web will present the full verdict of the Military Supreme Court as soon as it is available.