What happened to the free press?

“Watching TV Petersburg is like returning to the nineteen thirties,” said Yury Schmidt at today’s press conference. Nikitin’s lawyer was outraged by the scandalous TV series now running on that channel.

Published on December 9, 1999 by Runar Forseth 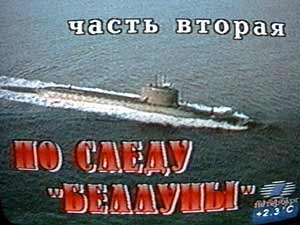 Petersburg TV, a local TV channel, is running a sub-series called “Tracing Bellona” in its “Out of Law” program series. Formed like documentaries, the programs clearly aim at scandalising the Bellona Foundation and Aleksandr Nikitin. It conveniently coincides with the ongoing trial.

It is no secret that TV Petersburg is a governmental channel, tightly linked with the FSB. So, as a matter of fact, we have a situation where the investigating body linked to an ongoing trial is actively making propaganda – outrageously falsified – in support of their views. Clearly, the finer details of the European Convention on Human Rights, ratifieded by the Russian State Duma, are of no great concern to the Russian secret service. 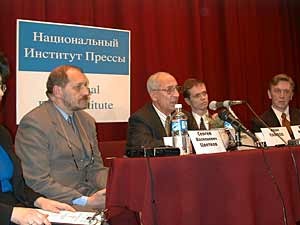 Slander on TV
“This press conference was called to give an answer to the slander of TV Petersburg,” opened Yury Schmidt. “Throughout the current trial the St. Petersburg FSB has been constantly using press and TV for misinformation concerning the merits of the charges against Nikitin and the consequences of the case.”

“So, during two weeks of the current trial, TV Company ‘Petersburg’ broadcast several programs, which had been prepared in advance and specially timed to the trial. Costly program shots were made in different parts of Russia from Murmansk in the north to Yakutsk in eastern Siberia. There is no doubt, that the organisers of the slandering campaign are aiming further than just creating negative public opinion about the accused and his work on the report of environmental organisation ‘Bellona’. The intention to put flagrant pressure on the court is absolutely obvious. It is an attempt to save the prosecution, which has proved its complete insolvency,” Schmidt thundered from the podium.

Several of the witnesses appearing during the trial also featured in the TV programs. “No doubt that the authors of the program aim to put psychological pressure on the witnesses who have not appeared in the court yet, to intimidate them directly,” said Schmidt.

“Can [these people not] understand that this is not year 1937, and that Russia has signed agreements which bind her to follow the norms of European and international rights?” asked Schmidt, concluding, “these people want to hold our country and Russian justice up to ridicule around the world.”

“Those behind this will be held responsible”
Much of Schmidt’s speech today was delivered as a petition to the Court earlier today. We link to that document at the bottom of this article.

Schmidt promised that the TV producers and others behind the ‘Out of Law’ series will be held responsible. “If we don’t get remedy within the Russian court system, the issue will be taken to Strasbourg. The name of the series is actually quite on the spot: TV Petersburg is totally ‘out of Law’.”

Showing parts of the TV series, Schmidt made a point of the fact that much of the facts behind the series (or close-to-facts, and presented in very intimidating ways), refer to incidents which are not mentioned in the charges against Aleksandr Nikitin. But they are still presented in ways that leaves the uncritical viewer to believe they are a) pertaining to criminal actions, and b) that Bellona, Nikitin or both have made such crimes. 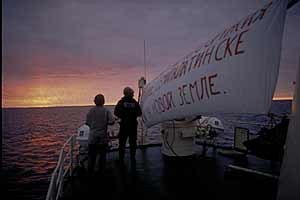 Outright lies presented as documentary
There is also the matter of the frequent fabrication of ‘facts’, such as a sequence about a Bellona protest against nuclear bomb tests carried out by the organisation’s vessel in the Barents Sea in September 1990. The Bellona ship kept outside the Soviet 12 mile zone, flying banners demanding a stop to the nuclear tests going on at Novaya Zemlya and in the U.S. Nevada desert. When Bellona activists started taking samples of sea life – still outside the 12 mile – their boat was guided away from the vicinity of Soviet waters by the Soviet coast guard.

‘Out of Law’ said Bellona members had breached the boarder and been arrested by frontier guards, then followed up with stating, “as it became known later, all the works in the territorial waters of Russia were carried out in favour of the US navy.”

A month after the Bellona action, members of Greenpeace did go ashore at Novaya Zemlya and were arrested. As to the “but as it became known later” – this is pure and slanderous speculation. Nothing of the kind ever “became known,” as the alleged connection to the US Navy is non-existent. That goes even for the Greenpeace activists, who actually did what Bellona gets blamed for.

This sort of thing happens through and through those programs. Things “have been known” or are only implied in strong ways, while they are either outright lies or very far off reality. This, in turn, is spiced up with interviews, not one of which is with people harbouring a positive mind towards Bellona or its co-worker Aleksandr Nikitin.

Russian Pen Club in talks with Putin
Director of the St. Peterburg Russian Pen Club, Sergey Svetkov, was present at the podium. He said the Pen Club supports the defence’s petition. “What happened to the free press,” he asked, ” we seem about to lose the last remains of the Perestroika. Are all journalists now acting as messengers for governmental interests?”

Last week, the Russian Prime Minister, Vladimir Putin, met with the Russian Pen Club. Asked particularly about the Nikitin case Putin had not given a direct answer, but did give an interesting comment: “we still have many old laws and decrees”.

Present at the press conference on 9 December were, in addition to many journalists and TV teams, the Consul Generals of Norway and Sweden, as well as a representative from the Canadian Consulate.