The dead should teach the living

Aleksandr Nikitin focused on submarine accidents and secrecy that prevents the younger generations to learn a lesson in his final speech this morning.

Published on December 29, 1999 by Siri Engesæth 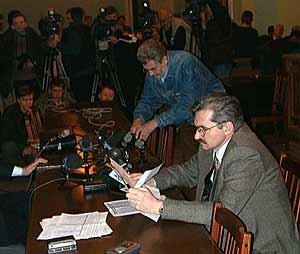 Aleksandr Nikitin would not talk about the legal aspects of the case in his final speech – this job was left for the lawyers and they did it well. Instead, he focused on the factual content of the accusations against him.

Nikitin said that the prosecution insisted that disclosure of information about accidents onboard nuclear powered submarines brought damage to the security of the Russian Federation. "How can an accident that happened 30 years ago bring any damage?" he asked rhetorically.

Nikitin proceeded to say that many had asked him why he published information about the accidents at all. "The thought behind it is that the dead should teach the living", said Nikitin.

Talking about the part of the accusation that deals with divulging of information on third generation submarine reactors, Nikitin said the ‘damage evaluation’ on this part was a fraud. The experts selected by the Russian Security Police, FSB, concluded that the damage from the disclosed information on this reactor installation would bring $20,000 of losses to the country, should the institute that designed them sell them abroad. "Such a deal is a fraud," Nikitin said. "The reactors of this generation were designed back in the 70-s and are not in use any longer"

The last point in Nikitin’s speech was about the prosecution’s claim in the courtroom that there is no danger from the ageing laid up submarines in the Russian Northern Fleet. In doing so, the FSB has threatened and used Vyacheslav Perovsky, an advisor to the Bellona report and employee of a Nuclear Ministry research establishment. Perovsky changed his stance dramatically in the courtroom in comparison with his position a year ago, now saying that there is no danger from the rusting nuclear submarines. To undermine Perovsky’s words Nikitin cited Russian Deputy Nuclear Minister Mr. Ivanov, who said in an article published in Russian national daily that the retired nuclear submarines posed danger to the entire region in north-western Russia.

The courtroom was crowded with journalists, TV-crews and observers. Nikitin’s speech was followed by applause.