Rear-Admiral Nikolai Mormul (76) is to testify in Friday’s court hearing.

Published on December 3, 1999 by Thomas Nilsen 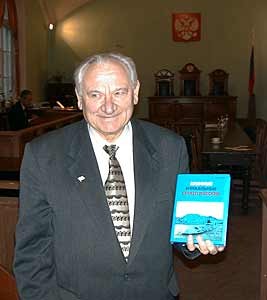 Ninth day of trial about to begin

Nikolai Mormul was one of the first Soviet sailors to go nuclear. In the late fifties, he recruited to serve onboard the Soviet Union’s first nuclear powered submarine, the K-3, named Leninsky Komsomol. From 1978 to 1983, he was the head of the technical department in the Northern Fleet. Mormul is today retired and lives in Murmansk.


After retiring, Mormul has written several books about accidents and incidents onboard nuclear submarines of the Northern Fleet. Mormul has first hand knowledge about this topic. He served onboard several of the submarines involved in such accidents.

Mormul participated in the part of the Bellona report dealing with nuclear submarine accidents, the well-known chapter eight. Bellona and Mormul had several meetings in the period when the report was worked out at the Bellona Murmansk office in 1995 and 1996.


It is expected that Mormul will be questioned about his co-operation with Bellona, and especially about the information Mormul wrote for the Northern Fleet report about accidents. The retired rear Admiral describes in details the different accidents onboard submarines in the north in his books. These books are in fact much more detailed than the part of the Bellona report Aleksandr Nikitin is charged with.


This is probably the most important fact Mormul can detail for Judge Golets today; all information in the Bellona report is taken from open sources, and that there is no so-called secrets.