Key FSB witness did not show

The third week of the trial against A. Nikitin started at 11:15 this morning, with a key witness for the prosecution failing to show up. It ended only two hours later.

Published on December 6, 1999 by Runar Forseth 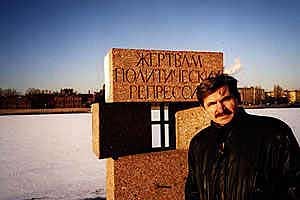 Oleg Leykin, an academician from the Academy of Military Science and connected to the Ministry of Defence, was expected to defend the damage asessment he did for FSB. He allegedly proved that either the Russian navy or a particular design bureau – it is not clear which – suffered a financial loss of 20,000 USD through the description of a certain reactor design in chapter 2.3.3 of the Northern Fleet report. It is also unclear whether this damage is one of loss of possible business, or whether Leykin made an attempt at putting a price on a particular alleged state secret.


“Leykin is important to Gutsan, and we worked on how to deal with him all of yesterday,” said Nikitin afterwards. “Leykin didn’t show because Gutsan hadn’t had time to brief him on his testimony. But Leykin will be heard tomorrow.”


As an aside to this, it should be mentioned here that the prosecution last year tried to prove that the damage caused by Aleksandr amounted to 1,000,000 USD. It was then not specified what parts of the report constituted those losses.


So far, Leykin is the third witness the prosecution has failed to make show up at Court during these two weeks. Last week, Valeri F. Bezverkhi and Vladislav P. Ibadulayev failed to show.None of these were of particular importance, expected to verify trivial information only. As Nikitin’s comment above shows, the defence is more concerned by Leykin.

In a slightly surprising move Gutsan presented an argumentation for a particular incident during the investigation. In his opening speech, chief defender Yury Schmidt presented a list of illegal moves done by the investigators on the case. One of these concerned the law-demanded appointment of witnesses to the investigation. These are supposed to be independent and unbiased. Two witnesses were appointed, or at least in writing testified to have acted as suchIt turned out, however, that those two witnesses were actually in FSB employment, so were not unbiased.


This, Gutsan explained today, was done because the investigation was about state secrets. The witnesses needed security clearance.


“But St. Petersburg is full of institutes with cleared specialists. FSB could easily have called in outsiders as witnesses, to at least give the impression of the witnesses’ independence,” commented Nikitin after today’s proceedings were over.


The scheduled witness failing to show, the Court started on their main task this week; that of going through the volumes of seconday documents compiled alongside the indictment. This is a ‘rather boring’ process, expected to last for two or three days, and going on behind closed doors.


“The judge leafs through a volume, then asks the prosecutor and us whether we have any comments. So far there were none to speak of,” said Aleksandr Nikitin in the first break.


The Court finished early today, after only two hours worth of work. This web site will of course keep you updated on any new developments. There will probably be none of our regular press briefings until next week. The Court will hear some of the experts involved in the many expert asessments carried out in the run of the investigation on 14 through 16 December.