There will be a happy New Year in Russia, for sure! At 14:50 St. Petersburg time today, 29 December 1999, Judge Sergey Golets revealed the verdict in the trial against Aleksandr Nikitin. Nikitin was acquitted of all charges against him.

Published on December 29, 1999 by Runar Forseth 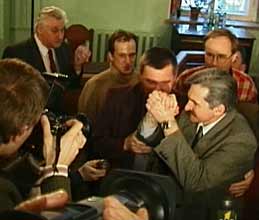 Nikitin’s victory is total. The verdict of St. Petersburg City Court left nothing for the Russian Security Police, FSB. After more than four years of legal violations and alleged ‘investigations’, Aleksandr Nikitin was acquitted on all charges.


The victory is even greater for the budding Russian democracy, the environment and the human rights movement in Russia. The acquittal of Aleksandr Nikitin means that the environmental movement in Russia may resume its important task of cleaning up the mess left after too many years of cold war and economical failure. It also means that the terror regime of the secret service may have come to an end, surpassed by the rule of law in Russia.


Our greetings go to the judge, Sergey Golets, who dared face the FSB without flinching. His verdict was indeed the only possible, if only Russian law had had the position it should in a proper democracy. The latter, though, was absolutely unsure until the last moment. Today, Golets made it clear that Russia is indeed moving towards a truly working legal system, after having chaired the trial proceedings commendably. In his verdict, Golets showed that there was no legal basis for the FSB’s indictment, and also strongly criticised the way the investigations had been carried out. 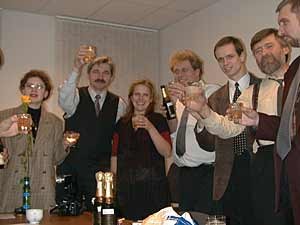 Our greeting go also to the defence team, consisting of Yury Schmidt, Ivan Pavlov and Mikhael Matinov, who carried out their task in a truly professional way.


But first of all, obviously, we greet Aleksandr Nikitin, who fought his battle against the feared FSB – true successor to the KGB – for four long years. Ten months of those years he spent in pre trial detention, at the KGB prison in St. Petersburg. Today, Nikitin has been vindicated; the secret police utterly defeated.