Experts: “The law messed things up”

The experts testifying in Court today admitted to never having applied the law in their work on classification and evaluation of state secrets. They also said the use of open sources is irrelevant, since a former secret remains a secret even if disclosed, as long as it has not been officially declassified.

Published on December 15, 1999 by Runar Forseth 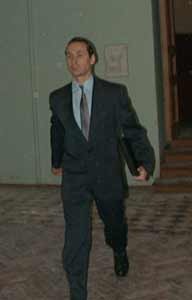 No explanation was given in Court for the unexpected appearance of the experts today. They were originally scheduled for tomorrow. The defense was already prepared, though, so the sudden change of schedule did not inflict on their work. The Wednesday session turned out to be one of the longest so far.

Romanov said that the Nikitin case had been the first time his department had tried to apply any law other than secret decrees from the MoD.

In all other cases, explained Romanov, had only the MoD decrees been used. They never referred to published laws or other normative acts.

There are more than 600 provisions in the MoD decrees in question. When asked by Schmidt whether Romanov had compared these to the law to establish that they were legal and applicable, Romanov’s answer was negative. “This was not our task,” he said.

So although the indictment now refers to Article 5 of the Law on State Secrets, the evaluations behind these references are clearly superficial only. 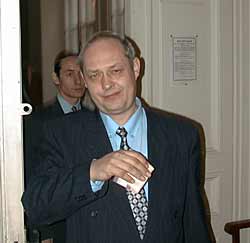 Retroactive application of the law
Judge Sergey Golets asked why they had used only the Law on State Secrets in its 1997 edition, while the work on the report was carried out in 1995.

This was because there had been no changes to the relevant provisions, explained Romanov. Also, it had been one of their tasks to check whether the report contains state secrets today, not only then.

Schmidt showed that the change of heading of Article 5 of the Law on State Secrets meant that its field of application had changed. In the 1993 edition of the law, Article 5 contained a list of “information that can pertain to state secrets”, and thus did not classify anything itself, while the same provision in the 1997 edition contains a list of “information pertaining to state secrets’. Also several other parts of the law are different from that of 1993.

Romanov admitted to not being an expert on legal technicalities.

Open sources of no consequence
Romanov also confirmed that the 8th department never cares about whether a piece of information has been published earlier. The MoD decrees determine what is secret – and that is that. An already disclosed secret is still a secret, unless it has been officially declassified.

The result of this is that anyone citing an open source may still be arrested, because the MoD may determine that the content is secret. Whether a particular disclosure of secrets is prosecuted or not, is entirely arbitrary. If the FSB wants to arrest the publisher, the MoD will back them up – even if the ‘secret’ information has been published ten times before.

“So everything is secret,” commented Aleksandr Nikitin afterwards, “whether to put people in prison becomes a technical question only.”

As an example, Schmidt had shown Romanov chapter 8.1 of the Northern Fleet report, which deals with the Komsomelts sinking in the Northern Sea in April 1989 – probably the most well-known submarine incident in the world. “Yes, all of this information is secret,” confirmed the expert.

The Komsomolets chapter is not included in the indictment.

Normative acts or technical norms
Article 15 para. 3 of the Russian Constitution states that normative acts have to be “published officially for general knowledge” if they are to be used as a basis for a criminal case. Thus, Gutsan spent much of his interrogation of the experts on establishing that the MoD decrees only were used as ‘technical norms’, not normative acts.

Although the prosecutor succeeded in getting such statements from the experts – albeit not without a start-up glitch where Romanov answered ‘yes’ instead of ‘no’ on whether the decrees were used as normative acts – this should not change anything.

As shown above, Romanov all but spelled out in capital letters that the 8th dept. uses the MoD decrees as normative acts. Besides, on January 27, 1997, Gutsan’s superior, Deputy General Prosecutor Mikhail Katushev, ordered the expert evaluations not to be based on the secret MoD decrees, since it would violate the Constitution’s Article 15 para. 3 to base the prosecution on these normative acts.

Except for this line of reasoning, Gutsan’s questions today mainly established the two witnesses as experienced experts in their field of state secret classification and evaluation.

Indictment expands on its citations
The second witness, Mr. Bakanov from the Navy’s headquarters, was mainly involved with comparing the report to the secret MoD decrees, while Romanov’s task had been the unprecedented one of looking into published laws and normative acts. Where Bakanov is a technical expert, Romanov is an expert on the art of classification itself.

“Does this also illustrate your regular mode of work?” the judge had asked. Bakanov could not answer.

Trial reschedule
The trial will continue on both Thursday and Friday, but pause on Monday and Tuesday. Tomorrow the remaining volume of the case files – the most recent one – will be discussed, and probably also the issue of the indictment’s use of key witness Artemenkov’s testimonial. According to international law this testimonial should be disregarded, since Artemenkov, who died in 1997, can not be cross-examined by the defence. On Friday Judge Golets is expected to declare the Court’s investigation complete.

Closing speeches will then be on Wednesday 22 December and possibly also on Thursday. It is still not known at which time the defence will do its closing speech – an event which will be open to the public, and which Yury Schmidt has promised “will be interesting”.