A few minutes past 11 this morning the courtroom doors closed for the second day of the Nikitin trial.

Published on November 24, 1999 by Runar Forseth 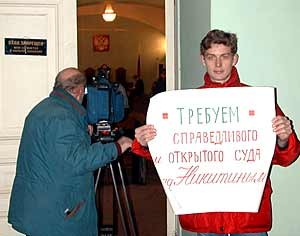 
The rest of the week, and possibly most of the next, will be spent behind closed doors, while the court examines the alleged secrets revealed by Nikitin through the Bellona report on the radioactive threat from the Russian Northern Fleet. The main task the judge took upon hos court for this period, is to compare the FSB-alleged secrets to information available, open sources.


Enemy of the state

Shortly before the proceedings started, prosecutor Gutsan told a Russian TV reporter that he feels confident about the outcome of the trial. “I will easily reject all the objections presented by defender Schmidt yesterday,” he said, adding “Nikitin is an enemy of our society.”


Bellona Web will bring an update shortly after the session ends this afternoon.