Submarine details may be finished today

Set at 11:05 this morning, the court is expected to finish its discussion of the Bellona report’s details on five submarine accidents.

Published on November 25, 1999 by Runar Forseth 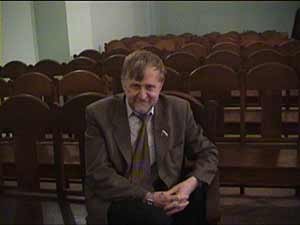 The third day in court started much like the second, with the doors closing on the public. Among those present outside the courtroom this morning were State Duma member Yuly Rybakov, who took a day off from his election campaign to claim his right to sit in on the closed hearings of the Nikitin trial.


Among those who were not let in were Citizen’s Watch member and chairman of the Environmental Rights Center, Yury Vdovin, and Mr. Dolinin from “Memorial”, a foundation supporting political prisoners. Also present were several Russian citizens, a Russian TV crew and some newspaper journalists.


Submarine accidents on the agenda

The whole day in court today will be focused on the Bellona report’s details on accidents onboard the four Russian submarines K-123, K-140, K-192 and K-222. A fifth submarine, the K-27, was dealt with yesterday. The five paragraphs describing these accidents, in addition to two tables listing several submarine accidents and part of a subchapter on a third generation submarine reactor developed in the early seventies, constitute the basis for the indictment against Nikitin. The court is expected to deal with the tables on Friday.


Yesterday, the prosecutor revealed his very particular definition of the use of sources in scientific work; that a text cannot be considered the source of another unless the latter copies the exact wording of the first. Nikitin should be able to establish that all the facts revealed in the Bellona report were publicly available at the time of writing. He will, however, have to plead guilty if accused of non-accurate text copying from his sources Much of the case will hinge on this peculiar understanding of scientific writing. Nikitin and his defenders hope and believe Judge Golets to be more in line with reality on this issue.