A matter of definition

The outcome of the Nikitin case may hinge on the definition of what makes a source of information.

Published on November 24, 1999 by Runar Forseth 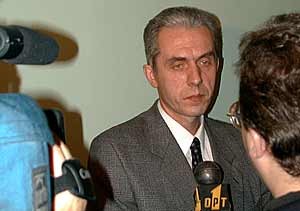 Second day of the Nikitin trial:

“Nothing really interesting happened in court today,” said chief defender Yury Schmidt at the daily press briefing this afternoon. “Aleksandr had to answer some general questions about his connection with Bellona, then we went on to work on the accident onboard submarine K-27,” Schmidt said.


Nikitin added, “the judge wanted some clarifications on my work in Bellona, since the prosecution has tried to make so much of my life look criminal.”

The K-27 suffered an accident with leakage in the cooling system of the reactor in 1968. The short sequence on this 31 year old incident in the Northern Fleet report was the topic of the second half of today’s dealings in court. Similar sequences on four other submarine accidents will be dealt with during the coming days.


“Information even this old is important if we shall be able to create solutions for the present situation,” added Bellona President Frederic Hauge.


A matter of definition

“The prosecutor only asked one question during the session,” said Nikitin. It was “What sources did you use to write the report?”


It turns out that the prosecutor’s definition of what ‘using sources’ means, is a little bit different from the one generally applied: unless the wording of the source has not been copied exactly, the information, according to Gutsan, must have been taken from someplace else.


“The judge seems to understand what this is really about,” said Nikitin. “And I think the prosecutor does too,” he added. “But since this is all he has, he must follow this line of reasoning.”


Schmidt added that there is another difference between the judge and the prosecutor. “Whereas the prosecutor could make his indictment a state secret, the law clearly states that the verdict, even in a case such as this, must be made publicly available. So the judge knows his conclusions will be read by lawyers around the world.”


The session today, though closed to the public, was observed by member of the State Duma Mr. Nesterov.