COMMENT: The Tsagovsky beatings: How authorities in Russia instigate violence and trample the rule of law

MOSCOW – Last Saturday, the Tsagovsky forest stand-off escalated to a veritable carnage as protesters, desperate to stop the unlawful clear-cutting – an uphill, if not futile, battle that is all too familiar to anyone who has heard of the Khimki campaign – took to knocking down the barbed wire fences put up by the logging company. Security guards responded with force, injuring dozens of activists. The fight that ensued, and everything that preceded the beatings, is an outrage for which the state is fully responsible.

Published on April 25, 2012 by Vladimir Slivyak, translated by Maria Kaminskaya 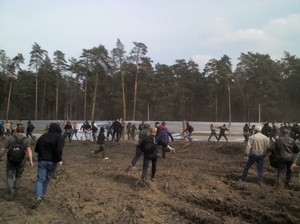 As the Prague-based Radio Svoboda reports (in Russian), residents of Zhukovsky, a town in Moscow Region where the forest is located, turned out in hundreds at the site on Saturday in a massive show of support for the activists, who have been resisting the clear-cutting for weeks. When they attempted to dismantle the fences, guards employed by a private security firm called Vityaz reacted with brutal force – and were in turn met with fierce opposition. A violent fight erupted, pieces of logs and even tear gas were used. Police arrived, only to observe the beatings from afar, then arrest activists who were already beaten – or anyone who happened to be in their way. Some 50 people were detained, including, according to Radio Ekho Moskvy (in Russian), pensioners and school children on bike rides, the Tsagovsky forest being a popular recreation spot.

Last Saturday, Radio Svoboda adds, marked a month since clear-cutting had started in the forest – a park that serves as a breathing space between Zhukovsky’s residential areas and industrial sector – and two weeks since environmentalists had set up a protest camp in an attempt to stop the logging for which they insist they have yet to see any permits.

It’s not that attacks on Tsagovsky activists have not taken place before in these past weeks – they have, and repeatedly. And they could only have resulted in what they eventually resulted in – further violence. The guards, who are not from Zhukovsky, took to roughing up anyone they didn’t like the looks of, and got away with it. But up to a point. When enough was enough, residents fought back. Quite logical, really, that sooner or later, people will want to defend their health and their lives, not just a forest they have grown to like to picnic out in or take a walk through on their way to work.

Those who have permitted this violence against citizens whose only fault was that they care – their own voters – made a huge mistake. I visited the Tsagovsky forest the previous weekend and saw what these private security guards are like. In no way would these burly guys in black coveralls touch anyone without a nod from above, if only because initiative of this sort could easily buy them a hefty prison sentence for inflicting severe bodily harm. It’s obvious that only one of two possible things could have happened here: Either the local administration turned a blind eye on the beatings that residents of the town whose well-being this administration is entrusted with regularly suffer at the hands of these guards – or they sanctioned these beatings directly. Which is, for all intents and purposes, one and the same. What were they thinking when they made this decision? Didn’t they realize that violence would only breed more violence?

The rulers of Zhukovsky must be some adventurous folk, itching as they apparently were to see if the locals dare take on a gang of out-of-town bullies throwing their fists around. Do they want to bet, while they’re at it, how many friends the Muscovites flocking to Zhukovsky to help out the forest defenders bring along next time?

What the administration is asking for, signaling their silent approval of the violence that’s been taking place, is a confrontation on a much larger scale. And should it happen, it will be fully on the conscience of those who have started the felling and the pummeling of those who object to the felling. These are the people who have unilaterally fenced out a patch of forest and declared it outside the rule of law – a no man’s land where the only law that applies is the boss’s go-ahead to beat up anyone who comes close enough.

And here is a word for those who think that the activists got what was coming to them because they were violating the law. Security guards do not have the right to do whatever they feel like, regardless of whether they think they are being provoked. Excessive force or not, fists or feet or batons, private security firms do not have the right to beat people up. It’s as simple as that. It’s not up to security guards to take the law in their own hands. Whether the protesters’ actions were against the law or not, the responsible thing to do was not to start an all-out brawl where people could get hurt or even killed, but to step aside and call the police to sort the matter out. This would be the civilized way of dealing with the situation. This would be the way of the law.

Of course, as witnesses say, when the police did arrive eventually, they were so without a clue as to what to do they were just standing around watching the guards stomping and clobbering people.

There’s another thing. Lawyers don’t usually work in security. In other words, private security employees can unlikely be expected to have enough competence to assess the legality of this or that action. So any action they themselves attempt at the scene that they might intend as prevention of a criminal act could in fact turn out to be a criminal act in itself. God have mercy on a country where it’s a security guard and not the judge and jury who decides what is and what is not a crime – and goes all vigilante on a group of townspeople gathered for a protest rally in the park.

The town’s administration, in its turn, must be relying on the old “might is right” principle here, and they could make no bigger mistake than that. Naïvely, they are probably thinking that should push come to shove, the locals would just even the score by giving the guards a few good shiners, and that’ll be that. No harm, no foul – not for the administration, anyway. But however irresponsible that is, it’s not even the main issue. Those who used violence against the activists – both now and before – must be held accountable. Their bosses must be held accountable, and the local administration as well.

Justice must be served here, before residents seek other recourse to defend both their lives and the habitat they are so desperate to preserve. When neither the political system nor the courts can guarantee the rule of law or something as essential as safety to their citizens – and hardly anyone places much faith in these institutions anymore – when the authorities look the other way while mob justice establishes reign over the territory they are in charge of protecting, the only way people see left is resistance by any means possible.

Environmental activists are not a violent kind, and rare is the case when an ecological campaign diverts from a peaceful route. And peaceful is how it was in the Tsagovsky forest, up to a point, until the authorities finally succeeded in stoking enough anger that open hostilities broke out. This will yet come back to haunt them. No society should be forced into a position to defend itself from the state, and only the feeble-minded would think of starting a war with their own people.

It might be that all is not lost yet in the Tsagovsky forest, and the situation could still be defused and resolved peacefully. But in order for that to happen, the conflict will have to be fully investigated, and all those responsible for using aggressive force against Tsagovsky protesters will have to be brought to justice – the guards, their employers, and the town officials who have sanctioned the beatings.

Alas, the authorities may only be interested in further violence, a perfect smokescreen to deflect attention from the illegal logging and civilized dialogue to criminal cases and vandalism charges. For us, when the police side with attackers and beaten-up protesters are bussed away to precincts, it is in our common interest to insist that punishments be doled out to those who truly deserve it.

UPDATE: According to information that became available on Saturday night, an inspection of the security firm’s paperwork had revealed the guards were stationed illegally in the forest. Their contract was only valid for 24 hours, and for a date that had expired a month ago: from March 22 to 23. The guards are still there. So who was violating the law in the Tsagovsky forest?

Vladimir Slivyak, frequent contributor to Bellona, is co-chairman of Ecodefense! and author of the recently published “From Hiroshima to Fukushima,” a compelling account of the nuclear industry’s most recent history, combining a detailed chronicle of the 2011 disaster at Fukushima Daiichi Nuclear Power Plant in Japan and an in-depth analysis of the industry’s problems in Russia.