Life with Putin after March 4: What will the new elections mean for Russian democratic reform?

Published on March 1, 2012 by Charles Digges 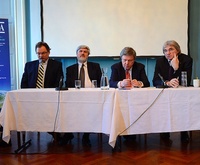 Yavlinsky said that as an opposition leader, he was firmly against violence, saying that bloodshed accompanying or after Sunday’s polling would lead to a setback of all dialogue between the government and civil society.

He was joined in that sentiment by Bellona’s Alexander Niktin during Bellona’s Nikitin Symposium 2012 in Oslo Thursday.

Both men predicted that Putin would win handily in the first round. In Russia, if one candidate does not capture more than 50 percent of the vote on voting day, a runoff is held.

But it the question of violence remains on most observers’ minds following the massive demonstrations across Russia that followed December’s Duma election, which were tainted with the suggestion of election fraud so Putin’s United Russia party of power could maintain control.

Would Putin resort to violence?

Many rumors aloft suggest that the Putin camp itself is planning to foment violence and blame its opponents. One rumor in particular is that the Kremlin has hired some 800 vigilantes from Chechen President Ramzan Kadyrov – so called “Kadyrovtsi,” – whose reputation as members of death squads and mafia-type knee-capping operations is well known.

On top of that are the OMON, the Russian police’s paramilitary unit, who likewise have a reputation for shooting first and asking questions later. News reports from Russia have suggested OMON units will be out in force.

Yavlinsky suggested that it would be naïve of Putin to engage in bloody shenanigans as there are enough violently inclined opposition groups in the country who would use the spark of discontent to their advantage, quickly spiraling the situation out of the Kremlin’s control.

What the opposition is – and who the other candidates are

Nikitin, Yavlinsky and the symposium’s two other panelists Pavel Bayev, a research professor with the Peace Research Institute Oslo (PRIO) and Alexander Duka, a doctor of Political Science and Sociology at the Institute of the Russian Academy of Sciences, agreed that none of the other candidates in the presidential election stood a chance.

Yavlinsky himself was disqualified from the ballot for alleged irregularities in the signatures collected in his support, which he and his supporters attribute to the Putin government’s wish to smother a truly alternative candidate.

Bayev said, however, that violence following Sunday’s election is impossible to predict.

“People are really fed up and Putin’s system is un-reformable,” he said.

But Yavlinsky echoed remarks he had made earlier in the day about the opposition seen on television screens and in newspapers worldwide was not as easily pinned down as a simple liberal movement.

This opposition movement – unlike others that, for instance, thwarted the 1991 hardline coup against former Premier Mikhail Gorbachev – has emerged from a system of relative comfort in Russia. The country’s oil boom has produced higher living standards and, hence, a class that is gaining a preference for thinking for itself.

The announcement in September that Putin would stand for reelection as president while President Dmitry Medvedev would step down and take Putin’s job as prime minster offended this new thinking class’s sensibilities of freedom and choice – setting the stage for thousands-strong rallies following December’s Duma elections.

The movement is not necessarily right or left leaning, said Yavlinsky, just more attuned to what some of the freedoms brought by their rising standards of living mean.

As for what Medvedev’s role would be after March 4, all panelists agreed that he would be compensated for his time keeping Putin’s presidential throne warm with perhaps the prime ministership, or another rewarding if somewhat ineffectual position within the government.

“He has been a good soldier, and he will be taken care of,” said Bayev.

But Yavlinsky and Nikitin underscored his essential irrelevance to the advancement of the Putin juggernaut.

“Medvedev is put Putin’s shadow,” said Yavlinsky. “Without Putin, there is no Medvedev.”

Those who will be standing against Putin in Sunday’s election are tycoon Mikhail Prokhorov, the metals billionaire and owner of the New Jersey Nets US professionl basketball team; long-time antic nationalist Vladmir Zhirinovksy; Kremlin ally Sergei Mironov, and Communist die-hard Gennady Zyuganov.

All, according to Yavlinsky have their scripted roles to play in the election: Zyganov courts the rust-belt hardliners, where Prokhorov projects the polished image of a western leader. Mironov is a long-time friend of Putin’s and Zhirinovsky’s ultra nationalists sentiments have long been rentable commodities as opposition for hire.

But all have an appeal to one or another portion of Putin’s electorate, and none of them stands a chance, at least in reliable polls, of beating Putin.

Get out the vote – for no one

All participants in the Nikitin symposium urged Russians to the ballot boxes, but Niktin and Yavlinsky particularly emphasize that Russian voters should vote the “none of the above” selection, which is an option on Russian ballots.

Bayev pointed out that Putin’s biggest trump card is the bureaucracy he himself created. The question remained, he said, as to what extent that bureaucracy would rely on open oppression if things do not go as planned on Sunday.

Regardless of whether the situation degenerates into violence, Nikitin said that Sunday’s election was “a beginning, not an end.“ 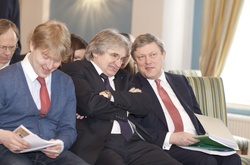 “People often ask me if Bellona is just an ecological organization,” he said. “They ask why we are involved in politics and political parties.”

But in Nikitin’s assessment, human rights, politics and ecology are inextricably linked.

“Bellona has no desire for political power, but we don have to get involved,” he said. “But gas, oil and nuclear power are big politics.”

After the elections – based on the assumption that the world will be dealing with another 12 years of Putin – Nikitin said that Bellona would have to adapt to new strategies in an every increasingly oppressive atmosphere, and that Yavlinsky’s  Yabloko would be an indispensible ally.

Yavlinsky seconded that, mentioning that he had made his first trip out of Russia in two years because of Bellona’s – an particularly Nikitin’s – invitation to come speak at the symposium.

He complimented the work of the Environmental Rights Center Bellona in St. Petersburg, singling out its director, Nikolai Rybakov, for special attention as a politically adept, ecologically minded leader.

He further said that Russia is still in a state of transition from dictatorship that began only 20 years ago – a dictatorship that murdered some of the country’s best minds. But he reiterated that it was the opposition’s job to avoid bloodshed.

“We will do our jobs,” said Yavlinsky, adding wryly, “Don’t worry, be happy.”