In Russia’s strange political winds, Bellona faring well – for the time being

Over the weekend as police were arresting some 100 Russian opposition demonstrators in front of Russia’s state NTV television, who were protesting the Kremlin’s chokehold on the media, Bellona’s Alexander Niktin – former traitor du jour – was featured in a oddly positive light on a cable offshoot of the once fiercely independent national broadcaster. 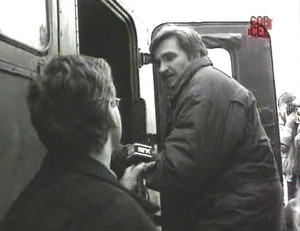 Nikitin himself has been featured on news programs years before, condemned as a traitor for giving military secrets to Norway through his work on Bellona’s Northern Fleet report.

Broadcasts dating back to his arrest in 1996 had featured footage of Nikitin shuttling under guard from police wagon to court and back again, while prosecutors with the Federal Security Service – or FSB, the successor to the KGB  – were given ample face time to shake their heads over his insouciance.

Much of the same footage of a heavily guarded Niktin was used in the Saturday broadcast on NTV Plus’s satellite channel “Sovershenno Sekretno,” or “Top Secret”  – an offshoot NTV, which was silenced in 2001 by once and future president Vladimir Putin for its anti-Kremlin line and turned into another government mouthpiece.

[picture1 { Nikitin arrives in court under heavy guard, an image shown frequently on state television broadcasts during and after his case. }

But some of what had been left on the cutting room floor from earlier government-run-stations’ coverage made it into what cable audiences saw this weekend – a hopeful Nikitin holding his fist in the air, the cheers of his supporters, and his recasting as the one man who has ever beaten the FSB.

Even the television footage of Nikitin speaking in his own defense was recorded in 2006.

The television program, “Shpiony Ponelvole,” or “Spies Against Their Will,” called Nikitin’s battle and his eventual creation of the Environmental Rights Center (ERC) Bellona in St Petersburg “an enormous achievement.”

It was a departure for Russian federal television content, which in the main boasts a focus on acts of derring-do performed by Russia’s police and security forces, monotonous meetings of Putin with various functionaries, and hoodlums beaten and packed into paddy wagons.

And to buy the federal media story line, that’s exactly what was going on outside the enormous Ostankino television tower, where some of Russia’s most Kremlin-sympathetic channels are housed – including the revamped NTV.

Opposition leaders Sergei Udaltsov and Boris Nemtsov were arrested with 100 more demonstrators from a 500-strong unsanctioned demonstration against the propagandistic press that Putin installed during his first presidential reign from 2000 to 2008.

It was the largest demonstration since March 5, when Putin, running for yet another presidential term, officially captured 63 percent of the vote. A demonstration planned on Moscow’s central Pushkin Square the day after was basically abandoned due to the overwhelming presence of twitchy riot police.

Demonstrations of 50,000 to 100,000 people had been nearly weekly since December’s rigged polls for the Duma, Russia’s Parliament, which re-entrenched Putin’s United Russia party as the dominant sector. Protests flagged somewhat after election day, but show no sign of abating. Udaltsov is calling for a “March of Millions” on May 6, the day before Putin’s 3rd inauguration.

Foreign government’s have denounced various voting violations that were observed on Putin’s election day, such as tossing in more votes for Putin during the count, and bussing voters from one precinct to the next to vote multiples times.

But no foreign government has gone so far as to call the election a fraud. Russia’s Central Election Committee, while saying the results stand, is nonetheless launching a probe into vote fixing.

But Putin earlier this month shrugged off opposition claims of rampant vote fraud as irrelevant.

“It’s an element of political struggle, it has no relation to the election,” he said.

How such high-profile opposition will continue after Putin retakes the throne for possibly another 12 years is anyone’s guess, said Nikitin in a separate interview after the broadcast. Will it be allowed under supervised circumstances, or will it be met with truncheons?

Indeed, Russia seems to be standing on a precipice as regards its relation to civil society: On the one hand, protestors continue to be rounded up and many NGO’s complain of undue pressure as waves of dissatisfaction with Putin continue to rock the boat.

Yet Bellona seems relatively untouched by these matters and its work continues undisturbed, said Nikitin.

“Russia is going through a period of ambiguity,” said Nikitin in an interview after the broadcast. “The old president is already not the president at all and is doing whatever he likes.”

Included in that was a meeting Medvedev held with environmentalists when he last week convened his Presidential Council on The Development of Civil Society and Human Rights.

At the high profile meeting, which was attended by Nikolai Rybakov, executive director of ERC Bellona, Medvedev made numerous promises to see through various amendments to environmental legislation.

He also promised to examine the case of Kransodar Regional Governor Alexander Tkachyov, who environmentalists accused of razing protected forests to build lush private homes for him and his friends, and of various environmental abuses as a massive construction campaign for the 2014 Winter Olympics in Sochi – in the Krasnodar Region – continues.

But Nikitin noticed in the transcript of the presidential council meeting a certain resignation in Mevedev’s performance with journalists – a haste to just get the meeting wrapped up and back to Moscow.

“If you not in the stenogram of the meeting, you get the impression of its full formality and Medvedev’s total lack of interest,” said Nikitin. “He doesn’t comment on the appearances [by convened ecologists]. He gives them the floor and then hurries them – as if to say ‘lets hurry up, we’ve got no time to sit around.”

Nikitin was careful to spell out that Bellona in Russia is walking a tightrope, but that it’s success in avoiding the stomping that many civil society organizations and opposition demonstrations are taking comes from being nearly apolitical in a highly-charged political environment.

Kremlin says it has nothing to fear from protests

Nikitin said that Putin has been laying low since his tearful victory speech before some 100,000 people – which many Russian newspapers alleged were bussed in and paid for their support, an allegation the Kremlin itself has levied against opposition demonstrators, specifically pointing its finger at the United States as paymaster.

In an interview with the BBC on Thursday, Putin spokesman Dmitry Peskov said the Krelmin is not frightened of the demonstrators.

He went on to say that “The US finances some NGOs which are involved in political processes [in Russia],” Peskov said, adding that Washington makes no secret of it and provides sponsorship officially.

“We see that that various demonstrations connected to the elections are violently put down,” Nikitin said. For the Kremlin, he continued, noting that Putin’s press secretary, Peskov, said” the subject of demonstrations is closed – that that is it.”

“So those who are unhappy and feel like raising this issue – off to the slammer with them,” said Nikitin.

The single political demand that Bellona has made came during the meeting between  environmentalists and Medvedev was when Ryzhkov and others maintained that Kransodar Governor Tkachyov’s term of service, which expires in April, should not be renewed.

“A few of our ecologists get toted off to the hoosegow, but that’s the initiative of local potentates like Tkachyov,” said Nikitin, but added that “Bellona has not directly participated in any election events,” and has been left alone.

“Bellona is not a political group – like, for instance, the groups formed by Udaltsov and Nemtsov – therefore we are, for the time being, calmly surviving,” said Nikitin.

A number of Western observers have weighed in saying that it would be ill conceived for Putin to crush the future of Russia’s civil society movement.

Richard Sakwa, an Associate Fellow of the Russia and Eurasia Program at London-based think-tank Chatham House, says there is significant political change on the horizon in Russia.

“Times have changed, and he cannot go back to the old style of governing,” said Sakwa. “And the fact he’s confirmed he’ll have Dmitri Medvedev as Prime Minister suggests that he will not reverse the liberalizing reforms announced on December 22.”

Can Putin reverse Russia – or had they really changed?

Sakwa says Putin is a pragmatist at heart and that enacting reforms will actually benefit the president-elect in the long run.

“The old system was stifling and ultimately it delegitimized Putin’s rule,” said Sakwa. “But the new measures will be adopted, and all of them are absolutely fundamental truthful changes that will change the whole dynamic of contemporary Russian politics.”

Post-election Russia will look remarkably similar to pre-election Russia, according to CNN political observer Fareed Zakaria, because Putin was already pulling most of the strings during Medvedev’s four-year presidency.

“Putin, in a sense, never left. Putin was running the government and the economy on a day to day basis,” Zakaria said. “While he had ceded the presidency, and therefore foreign policy, to Medvedev, it was really a charade – Putin was behind most of the most important decisions anyway.”

This, Nikitin would agree, is the basis for Medvedev being able to pretend to make nice with environmentalists, promising them rafts of reforms and a prosecutor’s investigation into Tkahchyov’s misdeeds in the Krasnodar Region.

But he says it is far too early to make any predictions about what Russia under Putin, take 2, will look like as far as the civil society and NGO sector are concerned – sectors, that is Zakaria is correct, have been losing ground since Putin cfirst came to power in 2000.

“This is the situation today,” said Nikitin. “But it will change, and what tomorrow will bring is unknown.”