Grigory Yavlinsky, leader of the Russian opposition party Yabloko said today in Oslo that regardless of the outcome of Sunday’s presidential elections –from which he was excluded from running– that he wants a peaceful and democratic country that is not awash in violent protest.

Published on March 1, 2012 by Charles Digges 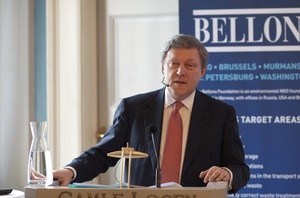 Yavlinsky was speaking at Bellona’s Nikitin Symposium 2012, to which he made his first international trip in two years to attend.

With the coming election and authoritarian Prime Minister and former president Vladimir Putin the hand on favorite to win Sunday’s contest due to the nearly insurmountable odds in his favor at the ballot box, Bellona, other Russian NGOs and opposition political parties are bracing for impact.

“Even though things have changed in Russia, many of the challenges when it comes to environmental work and freedom of expression remain more or less the same,” as they were during the Soviet era, said Bellona president Frederic Hauge in his opening remarks at the symposium.

“There are still plenty of important questions to be raised in Russia, and the international community will still play an important part in helping and protecting the men and women who are working to change their society for the good causes they believe in,” Hauge said.

But he noted that the prognosis for NGO involvement in Russia’s political life could slip away under a new Putin regime. Kremlin paranoia that NGOs serve foreign puppet masters is high, and massive anti-government demonstrations inspired by alleged election fraud in Decembers Duma, noted Hauge, have been ascribed by official Russia as meddling from abroad.

“The reaction from the authorities suggests that there will be stronger regulation towards the NGOs in Russia,” especially those receiving foreign funding, said Hauge.

Yabloko has a close relationship with Bellona in forwarding this cause – one that extends back 10 years.

“It is an expression of our [Yabloko’s] political culture and attention to ecology,” said Yavlinsky. “It informs how we cooperate with NGOs and we are thankful for the cooperation with Bellona.”

As the only Russian political party that has an environmental position, Hauge noted that when Yabloko was booted from the Duma and its seats fell to Putin’s United Russia party of power, the worst savaging of Russia’s environmental legislation and democratic involvement of Russian citizens commenced.

“[Russia’s federal] budget for environmental protection is officially around 0.1 percent [of the total state budget] as of today. In reality we have reasons to believe that it is actually less than 0.01 percent,” Hauge told the symposium.

This lack of transparency is pandemic, both Yavlinsky and Hauge noted.

“The whole state system created during the last decade by Putin and his ruling party is eroded by corruption, weak courts, lack of freedom of speech and lack of participation from NGOs and the general public in the decision making process,” said Hauge. “Instead of improving regulation and the rule of the law, the government in Russia has moved opposite direction.”

Hauge said that he wanted to see a Russia that was open and democratic, a country that values free speech and abhors corruption, and a country with a strong civil society and where people are guaranteed a healthy environment.

Can these goals be achieved under a dozen years of Putin?

But this wish list will be difficult to achieve in light of what Yavlinsky called Putin’s three pillared system of government, which incorporates various elements of corruption.

If elected, he will serve for six years – possibly 12 if elected again – thanks to constitutional reforms shoved through the Duma during the presidency of Dmitry Medvedev extending presidential term limits. And this term could stretch into 24 years should a new Putin government repeat the amendments made under Medvedev.

At issue, said Yavlinsky during his speech to the Niktin Symposium, were why he was excluded from Sunday’s Russian presidential election and why it is still a foregone conclusion that Putin will emerge victorious despite thousands taking to the streets in opposition to his regime.

Yavlinsky said that the main elements of Putin’s government – established during his presidency and carried through his tenure as prime minister – were unequal application of law, a judiciary under an executive strangle-hold, and the absence of real property rights. It was, he said, an extension of the corruption-ridden system of Boris Yeltsin in the 1990s.

“Laws do not apply to your close friends,” said Yavlinsky of the judiciary. As for property rights, what is worth owning has been distributed to tamed oligarchs, the rich in Putin’s corner, who, like they did in the 1990s, still “line up to get their presents.”

And in this climate, the environment is also cast aside as a priority, said Yavlinsky, because there is simply too much money to be made by destroying it. Be it clear cutting of forests for highways, allowing industrial dumping in water, or sweetheart deals for the nuclear industry, Putin’s friends, said Yavlinsky, simply have too much to gain by being gifted ecologically unsound industries.

Yavlinsky said that such a system, wherein corruption is so entrenched, was incapable of delivering political, environmental and economic rights to the people.

No belief in real democracy

Whatever lip service Putin pays to a democratic system of government, said Yavlinsky, is just that.

“My point of view is that Putin does not believe in the system of democracy does not exist anywhere,” he said, adding that speeches made by other countries’ leaders about observing voting principles, economic freedoms and rule of law were just window dressing hiding systems that were essentially identical to his own.

What of the opposition?

When addressing the issue of Putin’s re-ascendance to the Kremlin on Sunday in the face of opposition that has been expressing itself in dozens of demonstrations attended by thousands since the alleged rigged vote that took place in Decembers parliamentary elections – re-entrenching Putin’s United Russia party of power – Yavlinsky did not believe protestors would achieve their desired aim.

For comparison, he cited that some 80 percent of the Soviet population turned out to oppose the hardline coup against Former Premier Mikhail Gorbachev and his programs of Glasnost and Perestroika. By Yavlinsky’s estimates only 20 percent of Russians have turned out to march against the parliamentary elections.

This is due in part, said Yavlinsky, to the fact that the opposition lacks any real goal or leader. He also said that violent opposition on the streets could leads to setbacks for Russian civil society “in which Bellona plays an active roll.”

Yet, the political opposition is the outcropping of actual economic growth attributed to Russia’s oil boom.

“The country is like an addict, a gas pipe in one hand, an oil pipe in the other, and full of delusions,” said Yavlinsky.

Nevertheless, improved economic conditions have led to a population that wants choice and “dignity” said Yavlinsky, and which does not tolerate “being tricked in elections.”

The Russian population, said Yavlinsky, is one that “understands that freedom means choice.”

This applies both to the left and to the right, said Yavlinsky, a conundrum “that came as a big surprise to Putin.”

Yavlinsky excluded from elections for offering an alternative

Much as people would like to see an alternative form of government giving them basic elements of choice and economic freedom, Yavlinsky was excluded from taking part in Sunday’s elections by the Central Election Commission (CEC).

The commission ruled that over a quarter of the 600,000 signatures randomly selected for verification were allegedly invalid.

Specifically, CEC representatives said that Yavlinsky submitted color copies of sheets with about 130,000 signatures in his support instead of originals. Yabloko representatives argued that this was done in order to expedite their delivery from outlying regions to Moscow.

Speaking Thursday at the Bellona symposium, Yavlinsky said he was excluded because he represented “equal rights” and a chance to correct the persistence of corruption that was developed under former President Boris Yeltsin.

“This is too much for Putin,” said “Yavlinsky.

But Yavlinsky did not expect Russia’s voters to go quietly into another 12 years under Putin, and said that the Putin camp had made a critical miscalculation – especially given the changing political circumstances of the 21st century.

“People cannot live with the same person on TV every night for another 12 – possibly 24 – years,” said Yavlinsky. “People have had enough – good or bad, enough is enough.”

“Time is moving too fast and Russia wants a new perspective,” he said.