Chelyabinsk bromine spill said to be under control, but environmentalists concerned about toxic transport guidelines

Local authorities say a massive railroad spill of the toxic bromine near Chelyabinsk late last week, which sent by some estimates as many as 200 people clamouring for medical attention, is under control.

Published on September 6, 2011 by Charles Digges 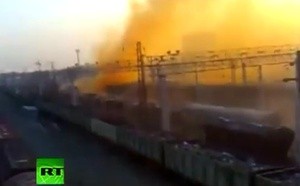 Though toxic fumes covered much of Chelyabinsk, a city of 1.1 million, as well as the nearby town of Kopeisk after 40 to 50 liters of bromine spilled out of broken glass jars at the Chelyabinsk train station on Thursday, the biggest worries among ecologists and the population remain how the emergency was handled.

Specifically, environmentalists are worried about a lack of regulation of toxic rail loads, lack of their monitoring and the secrecy that often surrounds such loads, preventing local populations from being informed of possible dangers.

“We would like to be sure that we have a sufficient normative base that guarantees the safety of these transports, second, that the regulatory norms be followed strictly and third, that regulatory agencies guarantee observance of these regulations,” said Alexander Nikitin, chairman of the Environmental Rights Center Bellona.

“Non-governmental organizations do not have that certainty,” said Nikitin.

The Urals transport authority said there had been a “breach of the regulations on handling, transporting and storing chemical substances,” and has opened an investigation. The prosecutor-general’s office has ordered the regional authorities to identify those responsible.

Widely used in organic chemistry and applied throughout the 20th century as a sedative, bromine in high doses is poisonous to humans and can damage internal organs and the nervous system.

Russia’s chief sanitary doctor, Gennady Onishchenko, later said 36 people had suffered minor bromine poisoning, RIA-Novosti reported. But the Prosecutor General’s Office said later that up to 113 had sought medical help over the spill, and 33 of them were hospitalized with unspecified symptoms.

City officials in Chelyabinsk – nearly 2,000 kilometres east of Moscow – said the spill could not cause serious harm, but nevertheless dispatched numerous cars with loudspeakers into the streets, urging people to stay indoors, Gazeta.ru reported. Authorities also conceded that the bromine could have negative effects for those with bronchial allergies.

One resident of Chelyabinsk, told the Echo of Moscow radio that the bromine leak had interrupted the first day of school and several schools were left to make their own decisions about whether or not to assemble pupils and teachers in school yards.

City officials urged the media not to ”sow panic” over the shedding of the chemical load.

“To calm down the population, I wanted to say that bromine is used for medical purposes to sedate people – albeit not in such quantities, of course,” Alexander Galichin, the region’s minister of radiation and ecological security, said in televised remarks.

Moscow-based investigators said the fuming red-brown liquid was released into the air as a result of violation of safety procedures in Chelyabinsk.

Russia’s state consumer watchdog Rospotrebnadzor estimated the amount of bromine released as between 40 and 50 litres. Investigators earlier put the amount at some 24 litres.

The freight train car carrying a total of 2,267 two-litre glass containers of bromine was later hauled outside the city, the emergencies ministry said.

It said that the liquid with an “aggressive odour” was released into the air when several glass containers broke.

According to later television broadcasts, people complained that city officials were simply lost and had no idea how to effectively react to the emergency.

“After the bromine leak at the railway station in Chelyabinsk the authorities reported they had all under control and there was no threat to citizens,” said one local news magazine show. The television show also reported that children were evacuated from the Lenin region of town with burns to their eyes and fainting spells, and that of the train cars after they had been moved to  Kopeisk  had exploded, but that these incident had remained unreported.

“There was nothing on television about this, and as a result, children suffered,” said that commentary programme. “If there was no danger, then why was it necessary to wear facemasks, or better, to stay home? At the beginning they wanted to evacuate the Lenin region. Where is the logic,” continued the programme.

The spill did not come without an element of humour: According to Soviet urban legend, bromine was given to military conscripts to suppress their sex drives, the Moscow Times newspaper and numerous internet sites report.

The legend has no basis of fact, but did not go unnoticed by the Twitter community, one member of which was quoted by the paper as warning that Chelyabinsk now faces “a year without sex.”

Alexei Smirnov contributed to this report.